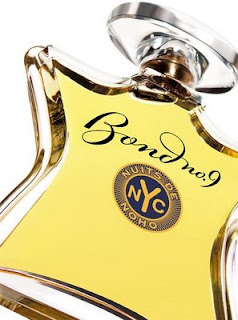 At this point, there are enough Angel smell-alikes to create their own separate category, so that owning more than one isn't any more ipso facto redundant than owning several green chypres or fruity florals. Spend enough time with these unconscious, unofficial flankers and you perceive the differences, subtle and otherwise, though, judging by the fragrance blogs, you'd never know there were any at all. Maybe it's just me, but Mauboussin for Women stands on its own (and how). So does Piguet's Visa, which is yet another variation on fruity radiance by Aurelien Guichard. Miss Dior Cherie is lighter than Angel, a study in strawberry. It has a lucidity Angel lacks, which isn't to say it's superior. The complex bombast of Angel is more than fine by me. Even Molinard's Nirmala, which is likely the inspiration for Angel, smells like its own bird to me, the difference between a Warhol cartoon painting and a Lichtenstein, maybe.

For some reason, you can't have enough chypres, but when it comes to Angel and its ilk, you must make a choice. You either love Angel, own it, and need nothing else like it, or you hate it for some perceived deficiency and would gladly choose an alternative which improves upon its mistakes. Angel's biggest transgression, unforgivable to many, is its liberal dose of patchouli. Nuits de Noho solves this problem for some, while for others it's so similar to Angel regardless that it isn't worth bothering with. It's true, Nuits de Noho smells a lot like Angel, but only here and there, and its focus on white florals, with a bit of indole and creamy vanilla, set it apart.

It has good staying power and mile wide sillage, so I don't see how it's a friendlier Angel, as some argue. Maybe the distinction has to do with tonal qualities. Both fragrances have peerless density, but Angel hits more bass notes, whereas Nuits de Noho explores a mid range. A pineapple accord gives the opening added bouyancy, and a bright and shiny character unique to the Bond line. Jasmine is the primary floral, and in some ways there are more similarities with cyber jasmine Alien than with foody, broody Angel. I smell an awful lot of gardenia, myself. It might surprise the uninitiated to learn that Nuits in fact does have its share of patchouli, perhaps because white musk mediates its overall effect. Nothing earth-shattering is happening here, but it's good enough for the price tag, projects wonderfully, and fits well within the larger project of its brand. I suppose vanilla is enough to make Nuits de Noho gourmand, though I can't see what else in the mix would push it in that direction. Still, like many of the Bond line, it conveys that near-edible impression.

Nuits is the top seller, next to Scent of Peace, at the local store here which carries Bond. Many of these customers wouldn't shell out the money for a bottle of Angel. And I don't think they're buying Bond because it's trendy and expensive. Bond gets slammed a lot for being overpriced, gimmicky, and unimaginative, all of which infers a lack of art direction or an overriding aesthetic. This seems disingenuous to me and I grow tired of hearing it. It's just as fashionable to knock Bond as it is to buy it, it seems to me, so who's ultimately following the herd? The truth is that the Bond line, like it, love it, or loathe it, is remarkably consistent, and from first sniff one can usually see clearly that each fragrance relates to the bigger picture of the company, speaking to the others before and after it. People like to accuse these niche firms of lacking originality. At this point in the game, with several hundred perfumes released each year, one or two glimmers of "originality" a season are about as much as can realistically be expected, so perhaps we can stop holding perfumes and perfumers up to that ridiculously misleading yardstick and start appreciating the subtle distinctions, advancements, and discernment involved in what they do. Consistency of vision, for instance, is no small accomplishment. A lovely, eminently wearable fragrance is a shock in itself. It's easier to see the differences between the work of Lichtenstein and Warhol when you look more comprehensively. If you set two of their cartoon paintings side by side, you have very little frame of reference for comparison, let alone deeper appreciation. You can only compare dots so long, and come up with only so much of interest.

I think Nuits smells great on a guy. To my nose, it smells no less masculine than the fruity green nelly-ness of Wall Street. I find it curious that Bond wastes time marketing to any single gender at all. Why not make the entire line unisex, and let the buyer decide? Is there some concern that an innocent young girl will stray into Riverside Drive and find herself trapped in Roucel's thicket of simulated chest hair? Is some guy going to walk out of the store with Bryant Park, only to be mistaken for a woman on the subway by a man who holds the door open for him, thereby ruining the lives of both?
Posted by Brian at 3/18/2009 02:02:00 PM

Great post! I love Angel in small doses, and am also a fan of Nuits de Noho. I also found that So New York had some Angel-like qualities as well. I agree that there is a lot of Bond bashing, and some of their scents do seem to be very similar to other scents out there (Lexington Ave/Feminite du Bois) but I think they have some excellent fragrances, and fabulous bottles.

Hey Amanda, how goes it? You know, I love Lexington Avenue, and you're right, there is some Feminite in there. It never occurred to me. I think almost any perfume has its twin in some other(s). And often the same person will fault one perfume for resembling another while praising something else for paying "homage". You can fault Etat Libre D'Orange's Vierges et Toreros for being a knock off of Bulgari Black and dismiss Nombril Immense as a copycat of Timbuktu, while praising another for being an update of Guerlain Derby. I think if you look closely enough most fragrances are following in footsteps. Who cares? It comes down to whether or not you want to take the walk too. That said, I don't smell Black in Vierges at all.

I have a few Bond samples (love the 'sweetie' wrappings!) but not this one. It seems Selfridges stopped stocking them, a pity since though I never bought one, I was always keen to see what thay had done next. So far I have liked Scent of Peace and New Haarlem.

Just FYI, the post before this, the Gobin-Daude one, is 'broken' as far as IE 6 is concerned. Until you put the next post up, I was unable to see anything at the blog except the photo for that post (I'm stuck with IE 6 at work).

Still broken. I see this Nuits de Noho post, the photo from the post below and nothing else, including the side bars with archives etc. I run Internet Explorer 7.

I re-posted the Gobin Daude post - is it better now?

Thanks for letting us know.

yes, it's working now - thanks! It was hiding all previous posts.

This is quite possibly the best review of Nuits de Noho I've ever seen! Thanks for writing it.

This is my perfume since 2007. Will I ever love another fragrance as much? I hope so. I just don't get why people trash the brand,haters. The sileage is pretty great and I always suspected there was something tropical. Recently I found out it has hints of pineapple leaves.
This post is probably the most honest I've read in a lonnng time.thx