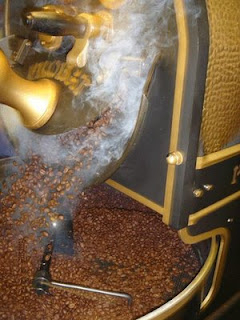 I'm sure Eau des Iles has its roots in several other fragrances (I've heard tell of L'eau de Navigateur) but I'm not sure I've ever smelled anything remotely like it. I'm a latecomer to Maitre Parfumeur et Gantier, having just tried Camelia Chinois earlier this month. That perfume reminded me of a Barney's fragrance I once really dug and still own, with the addition of a smoky petrol note lurking underneath an otherwise chipper green amiability. I liked Chinois so much that I scanned reviews of the line's other fragrances to see what might interest me, and Iles seemed an obvious choice, with Parfum d'Habit running a close second. What sold me were comments referring to Iles' smokiness. It was also compared to wood wine barrels, cigars, and meat rubs. What's not to like?

I'm always on the hunt for a good smoke scent, though I understand others are just as eager to run from it. Kolnisch Juchten is a good example of the category for me, as are J'ai Ose and the John Galliano room spray produced by Dyptique. All have a cured leather sensibility that really appeals to me, something about which takes me into a nice headspace. J'ai Ose is one of my favorite fragrances of all time (and a real undiscovered gem), a sublimely unisex blend of florals and birch tar which is at least as well done as Lancome's Cuir and in my opinion far superior to most other cult leathers (Reve en Cuir, Cuir d'Iris, et al). Like Kolnisch Juchten (German for "Russian Leather"), J'ai Ose smells of the hearth and the outdoors, conjuring mercurial trails of bonfire smoke.

Because I had only these fragrances to go by, I unconsciously expected something along their lines, so I wasn't prepared for Eau des Iles, which is in their camp but burning a different kind of wood. It could easily become my holy grail smoke scent, but there's more to it than that. Under the smoke are coffee, spices, and green notes. This dry smell is similar to the fragrance produced at my local coffeehouse, which roasts its own beans, a slightly resinous coffee aroma, as if coffee were taking a cigarette break. Add to this labdanum, frankincense, myrrh, and ylang-ylang. Perfume Shrine's profile of labdanum is worth quoting:

"It is balsamlike, with woody, earthy, smoky, and even marshy undertones. Some even describe it as ambergris-like, or leathery and honeylike with hints of plum or oakmoss after a rain. Usually it is referred to as ambery, but it is mostly used to render leather or ambergris notes..."

This is a good starting point for a description of Eau des Iles, as well. It would seem that labdanum ties all of the fragrance's disparate influences together, blurring their individual start and end points. If there is galbanum in the base notes of Iles, as I've heard, it's used with unusual subtlety. I've also heard tarragon. I wonder if the absence of birch tar and the addition of labdanum makes it seem simultaneously kissing kin to my favorite leathers and worlds apart. One of the things I appreciate most about Iles is its resistance to easy classification. This is a softer, woodier, foodier smoke than J'ai Ose and John Galliano. It's certainly smoother, more refined than Kolnisch Juchten; both are savory, but Kolnisch seems slightly undercooked by comparison. Jean Laporte created Eau des Iles in 1988, after leaving L'Artisan; thus, perhaps, some of the comparisons to L'eau de Navigateur (1982), which also makes use of a coffee accord. The dry down brings in a little bit of the barbershop and the fougere, a powdery aftershave which makes more sense to the nose than the mind. Iles is said by some to be too challenging to wear. Me, I've yet to find a fragrance too challenging to wear, including Secretions Magnifique (though that comes closest, admittedly), so I'm probably the wrong person to judge. No question, it's an uncompromising, no nonsense fragrance. I'm not sure that means it takes no prisoners, or whether some might feel incarcerated in its presence. For me, if this is a life sentence, I'll gladly serve it.
Posted by Brian at 3/18/2009 08:35:00 PM

This sounds enticing. You've only to mention Labdanum to get my ears all perky

what are some of your favorite labdanum-oriented fragrances, Karen? I know it's in tons of perfumes but can't single anything out off the top of my head.

Oh Lord, yeah, sorry Kathleen. I'd just woken up and called you Karen. That's the way I roll (right out of bed). I've been super curious about the Donna Karan Essence Labdanum. I love her signature fragrance, and Chaos and Black Cashmere smell wonderful too, but unlike the signature they're very faint on me. Very subtle. I'm a loud type. Is Labdanum projectile at all?

Never tried Roja Dove, either. Desert I have tried and like a lot, though I'd be hard pressed to identify labdanum in it.

Re: Tauer's Desert, there's no Labdanum in it, I'm an idiot. (I think I mentally moved on to vetiver)
I think you would find the same amount of sillage with DK's Lab as you would with Chaos or BC

What a lovely, thoughtful review. I'm going to have to revisit my sample. I tried this early on in my perfumista training and wasn't quite ready for it, I don't think. Had too little to compare it to. I don't recall noticing any of the "foody" notes (coffee, tarragon). Also interested in seeing if I notice the galbanum and labdanum this time around.

Just sampled this thing without looking up any of the notes and was all, "Huh. There's galbanum in this... and then woody stuff. And spices. Well, okay, 'Island Water,' makes sense... and what I call skin musk, kinda unmade-bed. And... is that labdanum? This is a weirdie."

So then, because I Am A Geek, I had to go look up reviews. And here I am, darling Brian whose writing I miss so very much.

Mals! If you're a geek I want to be one.