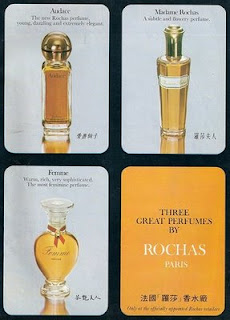 The Madame Rochas available today at outlet stores like Perfumania is probably a paler rendition of the original 1960 release. Still, it's lovely in a vaguely masculine way, smells both fresh and musky, can be had for less than thirty bucks, and lasts throughout the day. Madame gets knocked around by reviewers for its supposed resemblance to shampoo, and it does have that slight soapiness associated with many older perfumes. But it has enough complexity to make these accusations and comparisons beside the point.


Madame Rochas was designed by Guy Robert using a template made famous by its biggest inspirations, Chanel No. 5 and Arpege. During its development, it travels back and forth along the continuum separating those two. It has the honeyed floral warmth of Arpege, and diffuses off the skin similarly. It doesn't have the aldehyde overload of No. 5, but doesn't seem as aldehyde heavy as Arpege, either. Rose, Jasmine, Tuberose and Lily of the Valley mingle around in the heart of the fragrance, creating more than the sum of their parts.

The base notes interest me the most and, I think, determine what you're smelling throughout the lifespan. Orris root is said to be costly, and I'm not sure how an inexpensive perfume like this one can afford to use much if any, but it's listed in the pyramid, and the overal impression has the buttery affect you'd expect from its inclusion. Santal and musk are listed, too. Given that the former is expensive as well and the latter is unquestionably synthetic, it's pretty astonishing just how rich and textured Madame Rochas actually smells.

It was officially reformulated in 1982 by Jean-Louis Sieuzac and Jacques Fraysse. Sieuzac was the nose behind such greats as Dune, Opium, Fahrenheit, and Sonia Rykiel. Fraysse could be related to Andre (who created Arpege), Richard (in-house perfumer at Caron) and Hubert (who reformulated Arpege at some point). Madame Rochas, like so many other modern fragrances, has very likely been reformulated more than its manufacturers would prefer you to think. The so-called shampoo soapiness in question is nothing compared to some of the squeaky clean astringency of Bond No. 9's Madison Soiree or many more modern peers. For me, Madame Rochas is that rarity, an older perfume which, however different from the original, continues to smell good. More remarkably, it smells better by far than present day fragrances with retro-feel aspirations.
Posted by Brian at 3/29/2009 12:36:00 PM