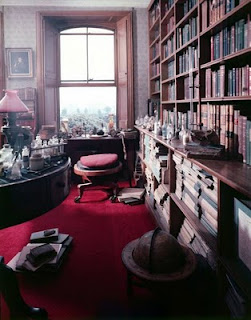 I've always loved Devin, but it's so close to Aliage, and the lasting power is so inferior to its older sister, that I've opted out of buying it. Now that Aramis has re-released many of its forgotten classics, some of which were discontinued, I've revisited, and I see my error. If you told me one of my favorite movies was being remade, I imagine I wouldn't be that interested. If you told me the director was making a sequel on the same themes with some of the same actors, I'd pre-order my ticket.

I don't know that Bernard Chant, the nose behind Devin, had anything to do with Aliage. I assume he did, though I've seen Francis Camail listed as the Perfumer. I don't contest that, though the earliest credit I can find for Camail is Eau d'Hadrien (with Annick Goutal). That was in 1981. An Estee Lauder fragrance, Aliage came out in 1972. It certainly bears the woody-herbaceous imprint of Chant, but so does Aramis 900, and I don't know that he did that either.

Devin (1977) was the second fragrance release from Aramis, an Estee Lauder offshoot devoted to male grooming products. Chant inaugurated the Aramis line, in 1966, with Aramis Cologne. Aramis was Chant's Cabochard, her cheeks slapped with citrus aftershave. Aramis and Estee Lauder fragrances are curious in their approach to gender. Azuree, released about five years after Aramis, is its androgynous counterpart. It's as if the man who was Aramis, after dressing in female drag, then put a suit on top of his gown. Aramis 900 is strikingly similar to Aromatics Elixir, a fragrance Chant orchestrated for Clinique. JHL (1982) puts big boy pants on Youth Dew and Cinnabar, classic Lauder feminines, monogramming them with Mr. Lauder's initials.

Aliage was somewhat butch to begin with. It was promoted as a Sport Fragrance, though I'm hard-pressed to come up with a sport women were playing back in 72 which might have lent itself to such a powerful onslaught of resins, woods, camphor and jasmine, a combined effect nearly nuclear in strength. The chrome and glass bottle, with its seventies type, recalls the indoor tennis courts of my youth: curvy modular surfaces, corrugated metals and amber glass.

I picture women in short tennis skirts, hair fixed to their foreheads by sweat, but the ad for Aliage shows a fancy lady perched on the back of an open station wagon, holding what appears to be a polo stick. She's dressed in a herringbone pantsuit, a tweed overcoat slung over her shoulders. Her shirt looks like something a man would wear. I'm not sure a man would fancy her beret, but its jaunty angle doesn't exactly broadcast the girl next door, or anywhere nearby. The look is finished off with leather gloves and ankle boots. A flannel blanket hangs over the tailgate, on top of which: a picnic basket, phallic bread loaf and wine bottle poking out the top. Because ads of this sort are market tested to within an inch of their lives, I take it no room was left for accident here. The message seems to be very much about women's lib and a spirit of emancipation which begins with a mindset and extends into lifestyle.

Interesting that Devin should take such a different approach. While its advertising campaign mirrored that of Aliage in key ways (the outdoors, fresh air, green backdrop) it was practically unconscious by comparison. It was billed as a "country cologne: a rich, sophisticated fragrance that captures the relaxed, unhurried attitude of the country life." I'm not exactly sure what the country life looks like, but Devin seemed determined to articulate it. I've tracked down three adverts for Devin. All show a scruffy male in a decidedly contemplative mood. The setting might best be described as elbow-patch rural. Surrounded by trees, open country roads, and grassy fields, the model seems to be far away (mentally and physically) from the sporting life. Taken together, Devin and Aliage indicate a pretty blatant reversal of roles. While women navigate the playing field, men go out to pasture.

Aliage never loses its bluster. It's a wind that never stops blowing. In effect, it remains active, whereas Devin is passive. Aldehydes make the top notes (orange, artemisia, lavender, bergamot, galbanum, and lemon) shimmer like sunlight through overhanging tree branches. But Devin isn't bright like Aliage, which remains piquant. The middle notes are dense and moody: carnation, cinnamon, jasmine, caraway and pine tree needles. Compare this to the middle notes of Aliage: pine tree, jasmine, caraway, Brazilian rosewood. In Devin, the mixture feels velvety, the lambswool collar of a knit sweater rubbing against your face. The effect is partly cloudy, and none of the ads depicts a sunny setting. Carnation and cinnamon add a spicy, simmering quality. Someone's cooking in the kitchen, somewhere in the distance, but it isn't a woman.

The dry down of Devin is mellower still. The basenotes read like a litany of library aromas: labdanum, leather, amber, patchouli, musk, oakmoss, cedar. Aliage subtracts the leathers and languor, livening things up with vetiver and myrrh. Devin doesn't really remind me of the outdoors, whatever the intent. I see a domestic, if equally solitary, scene; a dark glass of tawny port, leather arm chairs, heavy drapes, vintage books, wood paneled walls, a burgundy Persian rug. It isn't entirely insular. The window provides a view, and is cracked, but only just so. Looks like it might rain. The woman of the house is out there with her polo stick, oblivious to the forecast.
Posted by Brian at 12/17/2009 02:56:00 PM