One from the Vault: Fendi Theorema 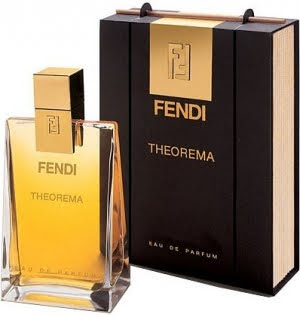 It took me a while with Theorema. I think I needed to smell other things first. A lot of other things. I don't think my frame of reference was wide enough at the time. Theorema seemed too sugared for my taste. There was something candied about it, I thought, which placed it alongside some of those department store celebrity fragrances which seem more like a dessert plate than a perfume. It seems strange to me now, that I had a full bottle of impossible to find Theorema and blithely gave it away. What was I thinking?
Released in 1999 (or 98, depending on source), Theorema wasn't exactly ahead of its time, when you look at the territory Serge Lutens had already traversed. But it was certainly unlike most of its neighboring fare at the mall. Some of the releases contemporary to it were: J'Adore, Allure, Rush, Baby Doll, Jaipur Saphir, and YSL Vice Versa. Aside from Allure, which shares vanillic qualities with it, Theorema stood alone. Even Allure's similarity ended with the word vanilla, as its treatment of the note took it in an entirely different direction. While not particularly edible, Allure emphasizes the gourmand bombast of vanilla, creating the impression of considerable density. Theorema explores the woodier facets of the pod, its results more lucid, if not transparent.
Organza Indecence also came out in 1999, and has more in common with Theorema than any mass release of that year (or many others). Interesting to see how Organza Indecence has persisted, if not thrived in the marketplace, while Theorema is now extinct. With a pronounced influence of plum, Organza Indecence is much fruitier, but both fragrances spread themselves out against a backdrop of sweet-spicy cinnamon and damp overturned-earth patchouli.
Theorema's top notes read like a perforated Lutens pyramid. Nutmeg, pepper, orange, rosewood. Its heart notes are classic old school oriental perfumery: ylang ylang, carnation, rose, and cinnamon. These middle notes place it in company, at least in spirit, with Opium, Asja (also Fendi) and Cinnabar. The base notes add to patchouli touches of benzoin, sandal, and labdanum. You can see the influence of Shiseido's Feminite du Bois throughout Theorema's carefully judged stages; specifically, its woody resins and sweet, semi-stewed mellow ambience. More than Lutens, even, I see a real resemblance to the work of Pierre Guillaume of Parfumerie Generale. Theorema is the distant ancestor of Un Crime Exotique, most notably, and I think diffuses more like a PG fragrance than a Lutens, going wider rather than deeper as it makes its way through the senses and the room.
Theorema now seems far less sugary than I once thought. I can't say why. It might be that I'm more familiar not just with a broader array of perfume in general but with more of perfumer Christine Nagel's work specifically. Her Ambre Soie for Armani's Prive collection is a step through the looking glass from Theorema, with that same strange burnt sugar quality. It came just four or five years after Theorema, but was much more at home in an exclusive, niche-like collection. Dolce and Gabbana The One (2006) is an adaptation of this style to a more commercial application. Rose Absolue for Yves Rocher (2006) and Mille et Une Roses for Lancome (1999) feel like the same perfumer working out the same sentence in different languages.
Theorema is difficult to find. I haven't tried the Leggero version. I'd be interested in hearing from someone who has.
Posted by Brian at 12/19/2009 02:10:00 PM

This is an extremely thorough review - thanks a bunch!

I have a miniature bottle of Theorema - and I like it, but I don't looooove it. I don't know why, exactly, except that every time I put it on, I'm thinking, "You know, this needs something..." It's just not *quite* right. And it seems a little dry to me as well, as contrasted to your feeling that it's too sweet.

I am quite fond of Organza Indecence, and I do see a lot of similarities between the two. There's something cocoa-powdery about Theorema, though, that I find less than pleasant.

I'm so glad to read more about Theorema. I _just_, finally, learned to love it - specifically, on December 11. And I'm very glad I did, because I was Not Quite Too Late to catch a bottle from BeautyEncounter - they're now apparently out of stock again.

Before that, I found it very similar to, but inferior to, Sushi Imperiale - which LuckyScent compares to Un Crime Exotique in their "if you like that, you'll like this" recommendations. I couldn't get any orange at all. Then Un Bois Copaiba taught me that particular orange, a few other perfumes taught me a few other things, and suddenly it all came together into something wonderful.

Now I have to try Un Crime Exotique again - I also found it similar to, but inferior to, Sushi Imperiale, but maybe I'm missing what it makes it special, too.

(Freakishly, I also seem to get a note common to all of these fragrances in Black Orchid. That, I don't understand.)

I bought the last bottle of it a few days ago somewhere online -- could have been at BeautyEncounter...

junaduft said...
This comment has been removed by the author.
December 21, 2009

Hi Mals. I went from like to love, personally, which isn't to say love is everyone's Theorema end point. Dry? You might be right there. Maybe that's what initially turned me off. I don't know. It seems perfect now, but I brought some expectations to it initially. Have you found the reissued OI to be different from the older packaging?

I looked at beautyencounter too, chicken freak. How have I overlooked Un Bois Copaiba?? I just looked it up and it sounds fantastic. I've never tried Sushi Imperiale eithere, though I'm pretty familiar with both Parfumerie Generale and Bois 1920. I can't speak to comparisons, but when I tried Crime Exotique at luckyscent I put it right next to the cash register. Its appeal was more visceral for me than the other PGs.