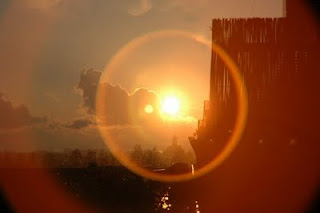 Smelling Alahine for the first time was a unique moment for me. I can't remember the last time I responded so emotionally to a perfume, when the clinical part of my mind was so swiftly bypassed, the more associative part so thoroughly ignited. Alahine is that rare fragrance for me, managing to meet my expectations without sacrificing the element of surprise.

What you do expect, from the raves on various blogs and boards, is an amber oriental. What catches you off guard is the mercurial development of the thing. Alahine goes through so many stages that at various points throughout the day I imagined I must be smelling something else I couldn't remember putting on. It has the complexity of (and more than a little resemblance to) vintage Bal a Versailles. They share a balsamic warmth, though Alahine remains sunnier. Bal a Versailles, if sunny at all, is constantly threatened by clouds. It retreats into a darkened room, becoming more insular. Alahine has its own drama, but it's a drama played out in the open, in broad daylight. The colors give away these differences, the one lucidly gold, the other a more inscrutable reddish brown. For me, Alahine is the untroubled person Bal a Versailles once was.

Granted, it's a setting sun, a rich, sulfurous gold. Out the gate, it seems to me more aldehyde than amber. The florals are hazed, one of those gorgeous old soft-focus photos, the light flaring in star shapes, the flowers amorphous arrangements of color. Those florals pop, but with the kind of impressionistic fuzz you find in Cinnabar. It's a fantastic opening, and I would be happy dwelling indefinitely there. It does last a while. Gradually, things go even softer, becoming what some have characterized as powdery. I don't get that so much. There are far more powdered fragrances. What Alahine becomes is more humid, muskier, than that. Hours on, it's working magic across the skin, shifting the subject from flowers to to field.

The later stages of development are where I get the vanilla, the benzoin, the patchouli. These have the most interesting, extended conversation with each other, sometimes murmuring, sometimes getting a little more excited, projecting what they have to say. Between this and the opening come rolling impressions of rose, jasmine, and (particularly, for me) orange blossom. These aren't so pronounced that you can single them out with any kind of confidence, but you don't exactly want to anyway. Alahine is about this particular harmonious convergence, a sum of its parts in the best possible way. You forget for a second what any of these things smell like by themselves.

I'd also like to point out how sublimely unisex it is. This stuff would smell good on anyone. It seems custom blended for the person who happens to be wearing it the way a period feels inevitable at the end of a well written sentence. Abigail wrote me to say I should give Alahine time, not because I might revise my initial opinion but because it's something that you grow to understand over time. I believe that. After a year, she realized it was her holy grail, and she hadn't really been looking for one. I'd just been thinking the same thing, so I can't imagine where I might be in twelve months.

YOU: "For me, Alahine is the untroubled person Bal a Versailles once was."

Well, F*ck me if that isn't the most beautiful, perfect description of Alahine!

Your review captures Alahine so well. It makes me want to write another, now that I realize Alahine and I are going on nearly a 2 year love affair. I could say so much more now. But I won't overdose our readers...I'll wait awhile... :-)

Well, this stinks... I've tried to post a comment three times, and have been interrupted each time, once by my boss (c'mon, I was on my lunch break!) and twice by my 'puter doing automatic updates, darn its metallic hide.

I came around the back way to Alahine. Bought a sample of Julia for my 14yo daughter, hoping she'd love a namesake fragrance. Then nearly bought Oha unsniffed, based on my love of rose chypres. Then finally ordered a sample of Oha from TPP - and received a freebie sample of Alahine. I have difficulty with resiny orientals (Evil Opium, Disgusting Obsession, the Terror that is Cinnabar... yeah, yeah, I'm biased and mean about it; Opium ruined way too many movies I paid babysitting money to see), so I wasn't expecting much.

The opening of Alahine, with that lavender-bergamot nexus, skates some Scary Aromatic ice. Once the ylang shows up, though, I get happy. "Sunshine" is a succinct description; I'd call Alahine the happiest oriental I ever met, and it's one of the few fragrances that can negate a bad mood for me. The second time I wore it, I knew I needed at least a decant. By the end of the first week, I was negotiating a bottle as a combined Christmas-birthday present from my husband.

I do find it complex, but each stage is cheerfully resonant, with the notes singing major harmonies. "Sunny, mercurial, gold, warm" - yes, it's all of those things.

I also love Bal, but I'm afraid I'm not really getting the comparison since I find the two different in both smell and mood. Bal is dense and intense and determined to get laid - it's the closest thing to the expression "French cathouse" I've ever smelled! In contrast, I'd call Alahine "clear," like the sound of a boy alto, or a low-toned handbell. It's shimmery and round and golden, but *clear.*

My parfum sample is awaiting a day when I have time to pay attention to it (I've been out of town, and am still catching up to normal speed). Can't wait to try that.

Mals, that's a far better review of Alahine than I can offer. I actually love that lavender in the opening, though I wouldn't know the first thing about describing it. It hovers in the periphery somewhere, making it difficult to pin down. As for Bal a Versailles, I can't explain that comparison any better either. Alahine just instantly recalled Bal a Versailles to me. I think we totally agree on their differences. I love your description of BAV. Wants to get laid is a fearless way of putting it. I agree that BAV means business, but in its way Alahine does too (for me). It has intentions. It isn't entirely an innocent itself. What is it about the two that I find similar? I wish I could say. But the comparison still holds for me.

Not a fan, Nathan? I admit there are (very brief) moments where I ask myself why this one appeals to me as much as it does, but I quickly sink back into it. I think that might be a pretty standard question for someone who owns so many fragrances when he finds one which pops out from the rest he loves.

All right, between you and Abigail, I was mercilessly hooked into giving Alahine another go.

I'm sitting in a coffee shop, wearing it as I type this. It's a lot more sublte than I'd originally given it credit for being, and it has a depth of field I'd missed previously.

I'm not sure if I'm yet a fan, but I'm at least appreciating it better for being its own accomplished piece of work; however, if I do turn out to be a fan, then I'll have you and Abigail to thank (or blame).