Christmas Smells: A Purely Biased List of Favorites, PART ONE 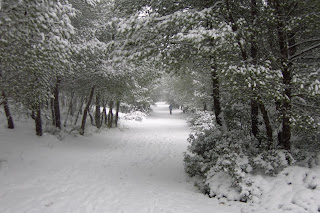 I'm not one for seasonal strictures--I'm dressed in white as I type this--and when it comes to fragrances, I find that I wear the ones I love all across the calendar. Still, scent is associative, and no time evokes specific memories around smell more than Christmas.

The fragrances I love to rediscover during this holiday aren't always the usual suspects; certainly not often the flankers intended to conjure a fantasy feast of gingerbread and fruitcake. My favorites scatter the elements of Christmas like a cubist painting, approaching the subject from a variety of angles simultaneously. They parcel Christmas out into bits and pieces of sensory memory, rendering them with photographic detail. Theoretically, I'd have to wear these fragrances all at once to get the bigger picture. In reality, they only work separately, one at a time, demonstrating how complex and textured the memories surrounding holidays are. Forty Christmas seasons have accrued a dense system of overlapping triggers. The following are the tip of the icicle.

There are several good coffee-centered scents in my cabinet (Ava Luxe Cafe Noir and A*Men Pure Coffee, to name a few). New Haarlem is something of a curiosity among them. While the coffee note is unmistakable, it tends to be much more impressionistic, depicting not just the steaming cup but the mood of the breakfast table conversation. As it wears, New Haarlem becomes slightly spicy, with interesting undertones of amber.

Ambre Fetiche is a deeply resonant mixture of resins and leather (birch tar, maybe?). It lasts and lasts, and lasts some more. This is a slowly collapsing, intermittently crackling pile of resinous logs left burning in the fireplace, viewed through the frosted glow of nighttime windowpanes.

Christmas is the smell of things stewing, simmering, and roasting. So what's with all the marzipan? Nuit de Noel is that rare seasonal fragrance, which bypasses sweet tooth for smoked savory and mixed nuts. That would be wood smoke and hazelnuts, and mingling somewhere within is the combined effect of all the settled-in perfumes worn by the women of the house.

The pomander hanging over the dinner table, distributing the aroma of clove, fir branch, orange oil, cinnamon, and dried rose in all directions. Approaching religious experience, it manages to insert the mood of Christmas Eve cathedral (those vast, vaulted ceilings and a Christmas tree the size of Rockefeller Center) into the dining room.

While not technically a seasonal release, Wrappings is sold only at Christmas. You get a 30 ml bottle with perhaps an equally modest tube of lotion. Forget the lotion, and buy the gift for yourself. This stuff is Ormonde Jayne Woman writ in neon the colors of pine tree and holly berry. Where Woman is warm, sleepy-eyed, and twilit, Wrappings is blinding bright and bracing cold. Woman is a solitary walk along a forest trail. Wrappings is a party in the snow. Mace, artemisia, cedar, and moss go the expected places. What veers Wrappings down an unknown path is the steep cocktail of cyclamen, jasmine, rose, carnation, and orris, electrified by aldehydes. The overall effect is as exhilarating as a snowball fight deep in the woods.

I get confused when people go on about this one's gothic prowess, as if it were all dungeon stone and incense smoke. It must be my chemistry, or my nose. Messe has always been user-friendly for me, a mellow, resinous incense. There's a wonderful zest of citrus up top, which takes its time leaving. Upon its departure, frankincense and amber move to the center of the picture. Truly a midnight mass, materializing a dim cathedral full of well-dressed men, women and children, all buzzing with barely contained, drowsy excitement under a veneer of respectably somber supplication.

There's too much dissonance in there to dismiss this as a sweet-shop essay on all things cake and cookie. "Woodsy notes" are listed in the pyramid, along with amber, musk, and an admittedly ubiquitous vanilla. This doesn't begin to get at the weird play of contrasts in Gaultier2. It's a dividing fragrance. Some find it saccharine. I find it has just the right touch of Barbasol. There's enough five o'clock shadow and tobacco in there to complicate the picture. One of the few fragrances to remind me of the men hanging out on the periphery of the Christmas festivities. Simultaneously robust and laid-back.

Somewhere between Shalimar's citrus petrol and Obsession's electric spice, Anne Pliska's signature scent strikes the perfect balance between edible and inedible on the oriental continuum. Abundantly tranquil, like a half-recalled moment of a forgotten Christmas day, where the chatter of family and the steady rustle of gift wrap evolved into a quiet, subtle hum, clearing your mind to unnoticed pleasures, scents from the kitchen you hadn't been able to smell through all the noise.

Roses are really the last thing the holidays bring to mind, yet despite all its comparisons to rose chypres past, Agent Provocateur manages to evoke the season in a way none of its predecessors did. It's probably the saffron up top, the cedar down below, and the vetiver somewhere in between, which situate the florals in the sweet but boozy territory of spiced rum cake, an aroma ascertained through elaborate plumes of cigarette smoke.

Truly a classic. Woozier then upright Opium, this oriental has dipped into the punch bowl with a little more abandon. You can smell the fermented fruit on its breath, and its fuzzy state of mind is palpable from the other side of the room.

I get pretty weary of the slams directed at Etat Libre D'Orange. The more time I spend with this line, the more I appreciate its artistry and quality. Even it's most ostensibly mainstream (i.e. throwaway) fragrances, like Don't Get Me Wrong, Baby (I Don't Swallow), offer riches worth revisiting. The sense of humor is refreshing and conversational. Why is it that we can laugh at the unintentionally silly and overblown ad copy of estimable houses like Guerlain, while faulting Etat for its open sense of the ridiculous? Why is it we don't bat an eye at horsey Hilary Swank writhing in the cosmos for Insolence, but decry the squirting penis of Secretions Magnifiques, as though the latter weren't the subliminal thrust of the former laid bare? In an industry which serves no higher goal than the bottom line, releasing only what has been test-marketed to death, what exactly is the beef with a house whose nerve is prodigious enough to push boundaries in the form of a fragrance like Secretions Magnifiques? I find it hard to take Etat's detractors seriously.

Noel au Balcon is a subtle inversion in some ways of the seasonal release. Key word release here, as indicated by the stuffed corset of the perfume's accompanying illustration. Noel au Balcon takes the dense cakey comfort food of Five O'Clock au Gingembre and turns it on its nose with perfectly judged touches of cistus and red pepper. It truly evolves on the skin, from sweet to salty, maintaining an interesting floral backbone throughout. Apply it before you meet the family. It will linger until you leave with mandatory leftovers. It has far more gravity than its brethren.

The only other Christmas rose for me. This one is straightforwardly rose, but its wine dregs hint at that half dark, half jolly place the right kind of holiday party can take you. This is rose as high drama--moody, like the emotional baggage you bring to the Christmas table, a state of mind where a butter knife can look like more of a weapon than you ever had cause to notice before. A scent like Une Rose makes all the trivial resentments and longings teased out by the holidays seem as majestic and impertinent as classic opera performed in combat boots.

Thank you for this wonderful list! Many fragrances I didn't know about, and can't wait to try!

Very interesting to see the ways smell makes emotional connections - my list would be quite different, of course.

Many of these I haven't tried; Wrappings is now intriguing me, and I'm thinking I need to go hunt up a Clinique counter, stat.

I confess to being one of those people annoyed by the "hipper than thou" ad copy from ELdO. The whole website may as well have a large disclaimer up announcing, "Republicans, churchgoers, suburbanites and soccer moms not welcome." If they're sooooo cool, they don't need my limited perfume bucks. I don't fault anyone for enjoying their well-made stuff, but *I* get to choose where I spend my money. Honestly, I'd rather support Laurie Erickson.

I always enjoy your reviews - this one was like a terrific little buffet, letting me snack on this 'n that. Kaleidoscopic. Thanks!

Well, republics tend to be wildly irrelevant to a French-based house, anyway. :)

Love the inclusion of Or des Indes. Much overlooked and gorgeously weird and strident.

Sorry, Arachne, I should have said "Political conservatives" rather than Republicans.