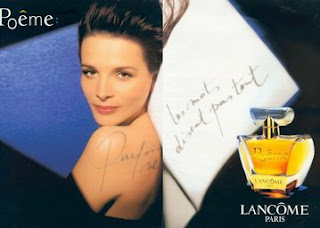 I don't know what it is lately but during the last several months I've been determined to give every fragrance I'm cautioned to avoid a bit more than a fighting chance. Maybe it's a rebellion thing. At school you were told to stay away from bad influences--not just things but people. Didn't it just make you want to follow them like a stray dog?

When I was a kid, I was told that my babysitter's boyfriend was no good, so of course I was all about the guy. I studied the sound of his voice, his expressions, his gestures, watched how the world composed itself around him, went wherever he went, looked forward to his visits while my parents were away. Ultimately, my mom forbid me from even talking to him (though, in retrospect, this might have had more to do with my unhealthy "attachment" than his alleged influence), and oh you should have seen the crying fit I pitched.

I've only recently started to realize how many perfumes I haven't even ventured to sniff simply because someone whose opinion I value (or am at least entertained by) discouraged me from bothering. Chalk this up to being a relative newbie. I had a lot of catching up to do. Naturally, happening onto this little sub-cultural pocket of bliss, one checks out all the consensus "classics" and the cult faves first. That takes a while, and I'm still at it--but, on the hunt for all these sometimes difficult to track down greats, I pass fragrances like Poeme again and again right there at the mall make-up counter. It's only a matter of time before I pick up the bottle.

Actually, judging by the perfume boards, Poeme has its fans. On the other hand, I admit it isn't the most groundbreaking scent I've ever laid nostrils on. However, the truth of its appeal and quality lies somewhere in the middle; meaning it's hardly the monstrosity I've heard it called, and doesn't deserve the kind of derision it sometimes gets. What interests me, more than Poeme's particular merits or demerits, is the phenomenon to which it falls prey, a death by obscurity that many perfectly decent fragrances suffer.

Poeme was made by Jacques Cavallier in 1995, five years after Lancome's bestselling Tresor. That was steep competition, and really, a rich floriental following a radiant rose is always going to have something of an uphill battle, lumbering under the weight of an already stuffed category. Even the company itself can't be counted on to help the thing out. The other day, smelling Poeme for the first time, I was actually directed away from it by the Lancome SA, who suggested Tresor instead. It's better, she exlained, without saying how. I sprayed some of the Poeme on a card before she got to me and walked around with it, surprised at how subtle it was compared to the way I'd heard it described. I liked it better and better, incensed at her hasty dismissal.

Luca Turin lists Poeme alongside Amarige and Spellbound as one of those fragrances that can clear a bus terminal at peak hours, so I expected something magnificently offensive. I'm wearing it today and while it's true that Poeme wafts up from your skin throughout the day, exceeding the lifespan of many a modern perfume, I would say it's tenacious but not offensively strong, unless you're just easily offended and need something to vent your frustration toward. I should also point out that Spellbound is one of my favorites. Silly me. You might expect to me to wear roach spray if it came in a fancy perfume bottle.

I immediately recognized Cavallier's hand in Poeme once I learned he'd created it. I can see suggestions of Shiseido Vocalize in it, as well as Rive Gauche Homme and YSL Cinema, and it is very clearly related to Jean Paul Gaultier Classique for women. Like JPG it smells of cosmetics--eye shadow and pancake foundation--and creates the impression of a woman preparing her face at a vanity, moving hands and hair in a cloud of fragrant powder. What it subtracts is the chemical hiss of fingernail polish. I can't say I miss it, though for me it has its charms in JPG. Interestingly, Perfume: The Guide also dislikes JPG Classique and puts it in the same camp as the above mentioned olfactory "atrocities." I imagine the pressure perfumers are under with a company like Lancome and wonder at how they're able to come up with anything at all, let alone something as nice as Poeme.

Jacques Cavallier doesn't seem to produce many fragrances about which people keep on the fence. M7: discontinued but legendary. Issey Miyake le Feu D'Issey: also discontinued, also legendarily love or hate. YSL Nu is one of the most fantastic peppery floral incense fragrances ever, if you're not one of the people who find it unutterably vile. Then there's Kingdom, which either smells like genital sweat or curried rose and jasmine with a deliciously salty edge. Recently, I tried Armani's Onde Vertige, one of a trio just released by the company. I'd read that Cavallier was responsible for one of them but when I got to the store I couldn't remember which. Guess which one I picked--and to think Maurice Roucel was among the competition. It reminded me how much I love Cavallier without always or even usually knowing why. Poeme has that curious appeal too, and as the day wears on and Poeme sticks with me, why and how matters less and less.
Posted by Brian at 5/10/2009 12:22:00 PM

Hooray! I love find someone else who dares to not dis Poeme. I would be one of those fans skulking about the edges, daring speak my love...but not exactly shouting from the rooftops about it, either.

I guess that's about the level it deserves. I agree; while not a masterpiece, it's a nice piece of work. If you enjoy it, it's worth finding the scented lotion...a nice way to deliver the experience without being quite as...dense?...about it.

Your observations about Cavallier are interesting. I need to start paying attention to noses behind my favorites. As it turns out, with the Cavallier ouevre you mention, I come down pretty firmly on both "yea" and "nay" when it comes to JC scents. Happy places: Poeme, Cinema (some days a bit "meh," others very nice), and Nu (always a love). Kingdom, as anybody who's ever had the displeasure of sharing a room or blog with me eventually knows, is a resounding "nay." (You can guess which of your two either/or experiences I get out of it...and I feel really duped when realizing I actually PAID for that scent.)

Oh good. Someone else out of the closet on it. It's STILL going, 7 hours after application. This is highly unusual for me. I usually can't smell anything after an hour or two tops. While some have impressive longevity, Poeme's is off the hook.

I have Kingdom, Le Feu, Cinema, M7, have smelled and like Trouble, LOVE Nu, and I have to tell you, I'm really liking Onde Vertige.

The babysitter is long since out of the picture but the memory has always stuck with me. Would you believe I can't even remember his face or what he looked like? I just remember the feeling sitting next to him on the front steps, and how I grieved when my mother separated us "for my own good".

Hi Brian! I wore Poeme when it first came out. I bought it along with Bulgari Femme when I was on a cruise in the Caribbean years ago. Loved it at the time. I could never stomach JPG Classique, though - too cloying IMO - but Poeme was nice. I remember going through my bottle of Bulgari, then purchasing another bottle. Got bored with it, though, and didn't make a dent in that new bottle. There aren't many scents that I repurchase - I get too excited about trying new stuff. I also had a bottle of Nu, but don't think I finished it before giving it away. I liked it a lot, though! It was nothing like anything I'd ever worn before.

I can take Poeme or leave it--though it's been years since I smelled it, so maybe I like it better now--but I'm delighted to find someone else who loves Spellbound, an honest-to-god masterpiece. Turin and Sanchez's brusque dismissal of it is one of the things that led to my disenchantment with them. They don't have to like Spellbound, but they're wrong about it: it's complex, mysterious, and rivetingly beautiful. Maybe they just haven't smelled it on the right person, i.e. me.

I was introduced to Pôeme around '99 by a colleague, she wore the most intoxicating perfume to work one day and she let me try it when i once visited her at home. I was fascinated by its longevity, its mood-enhancing qualities and its slightly sinister echo. Many years later when i entered a gothic/ebm-club in Berlin i suddenly smelled this very scent again! I supposed someone wearing Pôeme, of course, but no! They had lit champaca incense in the hallway and the smell mingled with warm summer-night air from the open patio and the atmosphere of the club created... Pôeme. The next day i got my first bottle. Still wearing it today. A compliment gearer and soother, instant-sexy-maker and dreamshifter, a great one!! I too was vexed by the comments on Amarige, Spellbound and Pôeme in The Guide.

I love Poeme. I've been using it for about 11 years. I get more compliments (from men especially) when I wear this perfume! Seems to have some sort of aphrodisiac qualities to it.

I became introduced to Poeme in 1996 when a friend had received a bottle as a gift but did not care for the scent. I tried and enjoyed the scent so she kindly gave me the bottle. I have not worn any other scent since! I receive many compliments and inquiries asking the name of my perfume. A major issue for me is that I have many allergies and suffer from asthma and Poeme is one of the only fragrances that I can wear. I am very sadden to hear that Lancome will discontinue Poeme.

I simply cannot understand how people could find my beloved Poeme offensive. To my nose it's the most gentle and subtle scent. And I get so many compliments while wearing it.
How could the sweet and barely-there Poeme could "clear a bus terminal at peak hours"? Honestly, it just boggles my mind...

I just sniffed Poem at macy's counter and I loved it, came home to read Luca Turin's opinion as I usually do and what a surprise that I differed this time with him. It got me thinking, is he and Tania Sanchez in any way discrediting Lancome perfumes because they are a big competition for Estee Lauder?
Are they in some form related to Estee Lauder products? they do love them and I do too, but today I had a very good surprise, when I smelled three perfumes from Lancome that I liked: Poeme, O L'Orangerine, Hypnoses senses, Miracle and one more: Tresor.
When I smelled Poeme I finally found the perfume I want to wear now, but will I be able to wear something which Luca Turin gives just one star?