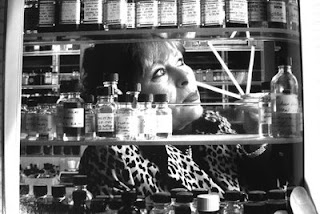 One of the most interesting things about Sophia Grojsman is how weirdly adaptable her style is. Her dimestore and discount outlet work often smells as wonderful as her more expensive compositions. Many people would disagree with me, but in some ways I feel Exclamation, her cheapo study in rose for Coty, is as impressive as Paris, which Yves Saint Laurent sells for at least four times as much--and it might even be more wearable. Do the differences in quality exist mainly in the marketing campaigns? I'm guessing there's an argument to be made.

Granted, some of the things she did which now litter the shelves of TJ Max were once aimed at a higher economic bracket, the best and most ubiquitous example of which might be Perry Ellis 360 Degrees. Like 360, I suspect that most of these fragrances, once they stopped selling like hotcakes, if they ever did sell like hotcakes, were drastically reformulated. Regulations, at the very least, would have tamed them in the last few years alone. I never smelled 360 back in 1993, when it was first released. I have nothing to compare it to. But more than one customer review I found online accused its makers of tampering so severely with it that it might as well be called 180.

It smells pretty damn good to me. The notes includ melon, tangerine, osmanthus, amazon lily, cool blue rose, muguet, lavender, sage, water lily, amber vetiver, sandalwood, vanilla, and musk. As we all know by now, the sandalwood will be purely synthetic, which doesn't always imply poor quality but in this case, at 12.99 per ounce, certainly must. It doesn't matter much to me. 360 is an odd little thing: a delicate balance of herbal, floral, fruity, and woody, if you can call anything this robust little. It makes a great masculine, never quite floral, never quite citrus. Like everything Grojsman does, it feels lush and slightly over the top, and outlasts the competition. Like Tentations, which Grojsman did for Paloma Picasso, it's an interesting deviation for her, though I can't pinpoint exactly how. I recognized her hand in it instantly, but unlike many of her compositions, which often feel like only slight variations of each other, it feels as if maybe, just maybe, it could have been made by someone else, or with someone else. Weirdest of all, it gets more instead of less intense as it wears down.
Posted by Brian at 5/06/2009 09:30:00 PM