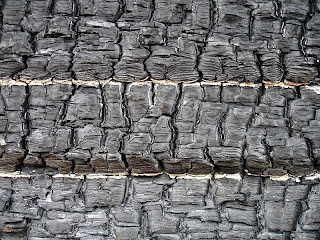 I stared at the description of Patchouli 24 on the Le Labo website for almost a year before purchasing a bottle. I love patchouli, though I understood from various reviews and customer comments that it was hardly the most pronounced note in the composition. I love birch tar even more, and 24 was said to be an overload of the note, so stinky strong that its inclusion forbid anything but a love or hate reaction. People talked of scaring their co-workers out of the room, then out of the building. Relationships ended. Dinner plans were canceled. Mother-in-laws got off the fence. By all accounts, it seemed like something for which I would definitely fall on the side of love.

The problem for me was complicated. The perfumer behind 24 is Annick Menardo, and, as anyone who reads this blog knows, I'm a fan. Her fragrances tend to have good lasting power, and some of them approach greatness on a level that many modern perfumers don't even seem to know exists. Here's the thing. The lady loves vanilla. Bulgari Black is worshiped in certain circles for its tea note and a pronounced rubbery splendor, but on me it smells, after an initial impression of complexity, like one of those skimpy deserts they put on your plate in aggressively expensive restaurants, daring you to complain (thereby declaring, when you do, for all the world to hear, "I am determined to be gluttonously obese and must balk at the tiny little piece of whatnot you're trying to pass off as a proper sugar fix. Hit me!).

I'd also read on many of the blogs that after its outlandish birch tar opening, 24 simmered down into a smoky vanilla, lasting the duration. I had problems reconciling all these descriptions, but I wasn't about to slap down 135 bucks for another jar of refined vanillic goodness. That I was ultimately willing to take a chance is a testament not to my resignation but to my irrational, logic defying love of birch tar.

I was hoping for something along the lines of J'ai Ose, a relatively cheapo, probably majorly reformulated bastardization of a possibly once great perfume. I can't help it. I love J'ai Ose. I'd bathe in it if I could. It's a wonderfully attractive composition that I couldn't at all figure out for the first several months I owned it. What was it--a chypre? A leather? A wood? Doubt kept me from wearing it, worried what kind of impression I would give off with something I couldn't even figure out myself.

24 was a massive disappointment, and I say this with all due respect to Menardo, because I recognize that it is essentially a wonderful fragrance. It's just not what I wanted, nor anything for which I particularly feel a need. It does in fact dry down to an abundance of vanilla--smoky, to be sure, but vanillic. The birch tar is still there, but so sublimated to the vanilla that it simply feels like a new slant on the note. "Burned vanilla!" And wonder of wonders, it at first didn't seem to last all that impressively. Maybe, I thought, le Labo actually just sucks. (Please don't write me nasty letters. I've since tried Iris 39 and put that unfair suspicion to rest).

One conclusion I drew from the experience is that, bad reformulation or no, J'ai Ose is hands down the best smoke leather I've come across. After spending a week with Patchouli 24, I went online to buy a quarter ounce of J'ai Ose pure parfum, which, in J'ai Ose world, goes for as little as 35, and feels like a million bucks. J'ai Ose ("I dared") was created in 1977 for the house of Guy Laroche, whose first perfume was Fidji. The fragrance feels much older than it is. It has a lot in common with floral leathers like Chanel's Cuir de Russie and Jolie Madame, though it smells smokier than either (and by smokier I mean blackened, i.e. charred) and less floral by far. Supposedly, the notes for J'ai Ose are jasmine, bergamot, vanilla, vetiver, musk, and sandalwood. I don't smell any of that, and find it very hard to believe there isn't birch tar in the mix playing a pronounced, even presiding, part. One never knows where these pyramids are coming from, or how figurative they are. Out of whose ass do these things get pulled?

I now realize that I had Le Labo Patchouli 24 all along. I had what I hoped it would be, anyway. Had I known that J'ai Ose was my holy grail birch tar fragrance, that much sought after burnt wood, I would have stocked up on it and saved myself much money. I should also add that, trying Patchouli 24 again last night, I was surprised by how long it stuck around on my skin. It's perfectly lovely, but not my cup of smoke.
Posted by Brian at 5/03/2009 11:39:00 AM

Funny. I bought a tester of Patchouli 24, declared myself in love with it, then never bothered to order a bottle once my 5ml ran out.

I guess my "love" doesn't run all that deep.

I agree with you re: Bulgari Black. It's the Ice Ice Baby of the Noire world. I can't understand for the life of me what the fuss is about.

Thanks for the tip on J'ai Ose.

How unfortunate. I for one adore Patchouli 24 and I believe after I run out of my sample, I'll be buying a bottle. Although, J'ai Ose sounds very interesting as well.

I tried P 24 at the Le Labo counter in Liberty, so I knew it wasn't my style. You're right, not enough tar. The new Poivre was nice, but not £160 for 15 ml nice. So I ended up with the Vetiver. Which, it turns out, lasts approximately bugger-all time on me. Ah well....

I'm afraid this is a very late comment to your post about J'ai Ose. I wore this back in the early '80's and loved it...when it became impossible to purchase in the states I used to get it via friends in Europe! Funny thing is that I've never known much about it, who created it, or anything. I don't even remember where or how I discovered it. No one had even heard of it other than, oddly, a woman who came to work at my place...we were not acquainted and it turned out we both wore it...I recently purchased a bottle online, wondering what it smelled like since I'd not smelled it in years. It seems different from what I remember but I love it now too! It seems rather more complex and more sophisticated than I remember it, oddly. I'm not surprised that I love it and you categorized it as a leather-I love leathers and especially Cuir de Russie..thanks for the fun post.

So, what with modern J'ai Ose? I'm getting coumarine and vetiver... but there's something else very familiar...

I purchased a bottle of Le Labo's Patchouli 24 with the money I had been given for Christmas this year, after having their Labdanum scent which I adored, I was smelling four different scents at their corner in Liberty, I am unaware as to how I came to be lumbered with such an expensive 100ml bottle of filth that smells like (to quote friends and coworkers) "it smells like clove oil, like my really bad toothache last year" as well as "is something burning? Please can you check the kitchen" along with "did the cleaner not take out the rubbish this morning?".

It is my belief I was given the wrong scent because on christmas day I was somewhat disappointed, dare I say I was absolutely gutted, my new luxury niche perfume smelled like burned bacon and clove oil, if I had wanted to smell of either of those things, or the two combined, I would not have had to spend £138 to do so.

Patchouli? You won't find it in this bottle.

I can safely say I have never regretted a purchase more in my entire life.

Le Labo announced something like a year ago I think that they had changed the formula for 24, so I can't speak to the version you probably purchased. I've grown to like the older version I have more and more. It isn't as foul or even as robust as it was said to be by so many, but I do like it a lot. It has a lot of birch and styrax in it, which is always a plus for me. I will say I don't get a bit of clove, and if that's what it smells like now, I can only wonder what they did to it.