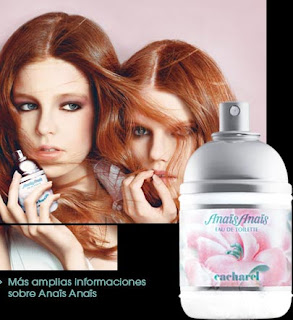 I'm generally astounded at the viciousness directed toward Cacharel fragrances, Anais Anais in particular. My ability to appreciate the latter might have something to do with gender. Anais Anais wasn't pimped on boys with the same virulence used to market it to girls. Giorgio, Poison, Paris, et al were made so aggressively ubiquitous to the female adolescent consciousness. Being a boy, I was spared that, but don't envy me too much before considering my teenage crosses to bear: Polo, Chaps, and Oscar Pour Lui were my own adolescent wallpaper, visible everywhere I went.

Anais Anais has no pre-conditioned associations for me. I smell it with fresh nostrils, and find all the vitriol against it curiously over-compensatory. Admittedly, some of my favorite perfumes are made by Cacharel. I can't say a bad word about Lulu, Eden is gorgeously strange, and Noa is at least interesting, if fleetingly so. Anais Anais has galbanum in the top notes, which is often about all I need to hear before robotically pulling my wallet out. Galbanum works wonderfully here against the counterpoint of Muguet and rose, and in some ways the effect reminds me of Ivoire, creating a certain spectral disposition, a hot, near-rubbery glow. If aldehydes make accompanying notes pop with 3-d precision, galbanum makes them burn bright by surrounding them in a white hot aurora borealis outline. Another way to describe galbanum's effect, at least on Anais Anais, is to liken it to condensation on a bathroom mirror and the humidity that comes with it. 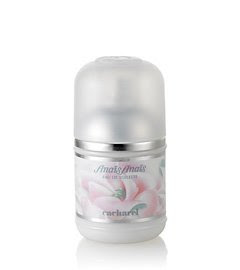 I love the Anais Anais ad campaigns, past and present. I love how the image on the bottle is vague, a little hazy, like something you'd see across the room through a blanket of steam. The milk-white bottle, designed by Annegret Beier, has a vintage boudoir feel to it. Best of all, the frosted plastic cap, which reveals the nozzle the way you ascertain a naked body through a foggy glass shower door.

Amber, oakmoss and a particularly nice cedar note in the base burnish the composition further, working in concert with the galbanum to create the sensation of hot, moist skin after a protracted shower. Anais Anais is more than anything a muguet fragrance, but to say that is like saying a Bentley is primarily a machine sitting on four wheels. The galbanum and amber and cedar, judiciously used, tease out the best qualities of lily-of-the-valley, enhancing its intrinsic oiliness in the best possible way. It helps that they and rose all share with galbanum an intrinsic tension between aridity and moisture.
Posted by Brian at 8/16/2008 05:09:00 PM

I've never (knowingly) smelled Anais Anais. OK, I expect I've smelled it ON people, but I've never sniffed it myself, and wouldn't recognise it. God only knows how I managed that, since it was ubiquitous back in the day!

But you have piqued my interest, Brian. Next time I pass a tester, I'll have a go!

I'm sort of promiscuous when it comes to perfumes, and Abigail and I share that underdog streak. Maybe I'm deluded. Maybe I would have hated Anais Anais way back when, had it been piped into the school cafeteria to mingle with the aroma of boiled hot dog.

Maybe I should hate it now. But it smells gorgeous to me. One thing I noticed about Beyond Paradise is that the bottle is half the struggle. Spray Gucci Envy on one arm and Beyond Paradise on the other, and try to remember, as the day goes on, which is which. And yet people who revile Beyond Paradise adore Envy. I think that has a lot to do with the Estee Lauder stigma (one I don't understand) and Beyond Paradise's unfortunate packaging, which resembles a jolly rancher on steroids or something sold out of an ice cream truck.

The packaging truly does deter in some cases, and you have to remove the perfume from that context. I happen to like Anais' container. The sound the lid makes when it snaps back on is addictive to me, and the milk glass is great. However, if it were sold in a Bond No. 9 bottle I bet 9 out of 10 perfumistas who don't like it might suddenly sing its praises.

In fact, it reminds me of some of those Maurice Roucel compositions: bold and distinctive and practically edible in its three dimensional diffusion, which smells as powerful and commanding as a cake cooking in the next room.

Oh, I'm a bit of a roundheels when it comes to perfumes, too! I like so many things others probably wouldn't touch because they aren't classy enough. (I draw the line at Charlie though - that's the one I used to have to smell alongside my school dinners. Mind you, the dinners smelled so bad, at the time I was probably grateful! Convent school=nuns denying the flesh=really crappy food...)

My not trying Anais Anais is more to do with the fact that it's been part of the perfume counter furniture for so long, I don't even notice it any more. (You're right though, the bottle is pretty).

There's definitely a snob factor about packaging and some manufacturers, especially the 'drug store cheapies'. People who'll hunt down vintage Coty on eBay probably wouldn't think of trying Vanilla Fields. I've never heard of a stigma against Lauder though - is it the packaging, or the perfume?

I like Beyond Paradise, even though the lurid bottle tempted my year-old niece to try and chew it! I've never tried it next to Envy - now I will. Yes, I know, more pressure..... ;-)

i was offered Anais Anais when in convalescence from a skull fracture; suffice to say the moment tried it, i felt as if I my hair were back again, i was desirable and felt joy;i was blooming 16 years old at the time, Anais was a panacea. Since then, this perfume has a special place in my heart. - truly Violaine