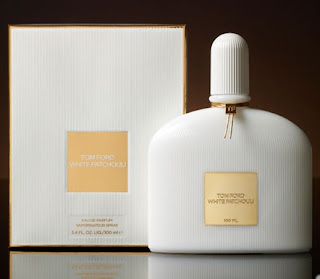 Today I went to Neiman Marcus to try the newest The Different Company fragrance called Sublime Balkiss by Celine Ellena. To my dismay, Neiman’s had the rest of the TDC line but didn’t have Sublime Balkiss in stock yet. I was so disappointed. I’d been planning this trip to Neiman’s for days and I should have called first.

While I was there I asked the sales associate if she had samples of Tom Ford White Patchouli. She said she only had one tester bottle and there weren’t any samples yet. She allowed me to spritz from the tester; I did so with her watching me, I felt greedy as I spritzed my left arm three, maybe four times. I walked around the store, checked out the new Feerie bottle, and went back to the sales associate with the Tom Ford White Patchouli tester. I always carry some empty vials in my purse just in case so I figured I had nothing to lose and asked her if I could take a sample from the one single tester bottle in the entire store. She looked at me as if I’d asked for her first born child. I gave her a pathetic begging look, told her about Sublime Balkiss and how Neiman’s was an hour from my house, and she finally agreed. She took the vial from me and decanted the sample behind the counter in a guarded fashion as if she were performing a criminal act. I actually felt like I ought to be a look out for her or give her a warning if someone else were walking over. She gave me the vial back (2.5 ml, yay!) and I thanked her profusely and walked around the store a bit more. Since I was there, I decided I was getting low on one of my favorite TDC fragrances, Sel de Vetiver, so I picked up a box and brought it to my partner-in-crime sales associate. That seemed to make her happy; that I was actually buying something now. Then I wandered over to the fresh counter and sniffed Cannabis Rose and Violette. Both are innocuous and pretty, like most fresh scents. I also realized that I’m running low on Jo Malone Pomegranate Noir, so I picked up a bottle of that, too, and brought it over to my now very happy sales associate. This was enough damage for one day so paid and exited the store before I thought of anything more I might need….

First, I’ll confess, I’m not a fan of Tom Ford’s last few fragrances. Black Orchid, while definitely interesting, smelled like crotch to me, so I never purchased it. Then I boycotted him after seeing the Tom Ford for Men ads, which to my mind were like someone just took a Marketing 101 class called “how to gain attention for your product by using nudity and sex to cause a stir.” That said, I’m actually a fan of patchouli, the note itself, I love L’Artisan’s Voleur de Rose and Keiko Mecheri’s Patchoulissimo and I decided that I was really quite curious about TF White Patchouli. I couldn’t imagine what a white citrusy floral with patchouli would smell like and I decided to let the juice speak for itself and give it a go. I admit I was really looking forward to trying it.

Well, I’ve had a disappointing day. First, no TDC Sublime Balkiss and now the smell of TF White Patchouli made me nauseous. I’m not exaggerating. For me, for the first hour it smells like astringent, something like Seabreeze facial toner mixed with bug spray. I can’t identify anything even close to patchouli in the first hour or so nor do I smell anything close to a white floral or citrus. I thought about how I adore Serge Lutens Tubereuse Criminelle and how I’ve come to like the menthol/rubber beginning, so I decided to give TF White Patchouli it’s due and wait a full 5 hours before making any sort of decision.

After forcing myself not to scrub it off as much as I really wanted to, it finally dries down to something much less nauseating. I eventually smell a whiff of patchouli, but a very astringent and light patchouli at that. Yes, I can see why it’s called White Patchouli because this patchouli isn’t dirty or dusky or deep at all. After a few hours a faint woody note emerges and an even fainter incense-y note, too. I can’t detect any of the floral notes that are supposed to be here; no white peony, no jasmine, no rose, for me. To my nose everything blends into an astringent aroma laid over a very soft uninteresting patchouli.

In the end, after the full five hours, it’s not horrible, but it just isn’t good, it isn’t what I hoped it would be and I won’t be among those placing their pre-orders. Again, I think of Tubereuse Criminelle, and while I have come to enjoy those initial menthol/rubber moments, I think I do so because I know what’s coming, I know that it develops into a masterpiece. At least Serge Lutens rewards me for wading through those initial awkward moments, where Tom Ford’s White Patchouli, just doesn’t come anywhere close to a masterpiece.

The bottle itself is rather boring and ugly, too. I can’t help thinking that if someone were to stick a cheap drugstore label on it and ask a group of unknowing people to try it they’d all exclaim how dreadfully horrid and cheap it is.

I stumbled across your blog while trying to find where I could go to smell this elusive perfume. So far the only store close to me that is supposed to carry it is Sephora but of course they didn't have it when I went or know when it would be coming in. I live in NJ, I should have known better. Anyway, I must say after reading your review, the challenge has now worn off. And I am happy to know I am not the only perfume snob out there. I would never spray more than one squirt of anything I was testing so I have to give you credit for extreme commitment to your craft.

I'm in Jersey, too. I sampled TF White Patch at Neiman Marcus in the Short Hills mall.

Others have liked White Patchouli so maybe it's just me. Even my beloved co-writer, Brian, at I Smell Therefore I Am, likes it. So perhaps you should continue your quest to try the newest Tom Ford juice...

Thank you for your wonderful work and knowledge of fragrances.

Where oh where can I find Sel de Vertiver in the city, NYC?

I know TDC is available at Barney's and Neiman Marcus. I'm not aware of a TDC boutique in NYC yet, though.

I ordered this online, unsniffed, based on great reviews. All of Fords frags seems to be liked, and i thought "how wrong can it go". Well, i tell you, very very wrong. First i thought i must have received an off bottle or something, but i ordered it from a reliable online frag store, so that's not likely.
Thank god i found your review, i was thinking my frag taste must be horrible, and that my nose maybe just isn't used to "finer" stuff. Well, i gave this one many tries. And ended up thinking exactly like you described it: astrigent, with a clean, weird patch undernote. No flowers, nothing else. Monotone, it didn't change or develope, it just stayed the same for hours, untill next morning, it had faded away.
I'm trying to learn about perfumes, my main goal is to find something perfect for me. Something pretty, that makes me smell good. Not something weird, just so i can say it's niche, or expensive. White patchouli was just plain awful.