Seeing the Light in the Breath of God 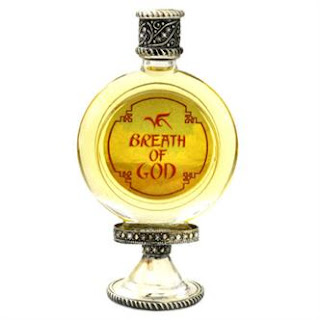 Breath of God is a gospel CD by C. Millhuff which can be purchased on the Musichristian website for the miraculously low price of 5 dollars and 77 cents. This double length CD offers 700 biblical promises with orchestrated background of well known hymns--and it's only the first volume, which might mean God is a heavy breather. The compilation is "very spiritually reassuring and relaxing," says the manufacturer. Many use it at bed time for children. Bill & Gloria Gaither, whoever they are, describe it as 'overwhelming'. The opening track is called "All of You Who Endure", surely as much of a warning as an overture. "I Am Always Thinking of the Lord" follows, along with, among others, "No Mere Man", "Since We Believe in Jesus", and "Take My Yoke Upon You." What better at bedtime than a sedative?

It's easy and sometimes good for a laugh to poke fun at organized religion, not least when it ventures out into the marketplace with a lowest common denominator smile on its face. In fact, God is many things to many people. To a select few, He's no one at all, which of course is another kind of someone, as negative space is space all the same. Most people, even the most devoutly Christian, have some sense of spirituality. Where did it all come from? Where is it all heading? Who in His right mind would come up with those funny looking, hairless cats? The mind is constantly questioning. The world is full of wonder. Something, or someone, somewhere has to encapsulate all the wondrous conundrums that make up a life. You get so used to things, so buried in the mindless grooves of the day to day, that you can easily forget how amazingly complex and unlikely the universe and creation are. Something or someone has to remind you.

Every once in a while, along comes an entity which snaps you out of this, with such force, such clarity of purpose, that you see it all very clearly suddenly. In that moment of lucidity, you see it's both a joke and a dead serious, awe-inspiring proposition: your life, everyone else's, the fact that skyscrapers and barns co-exist in the same implausible scheme of things, along with Mozart and Mama's Family. The shaky brevity of relationships and our constant, heroic struggle to understand one another, how big it all is, how far reaching, how large and impossible to see all at once, how simultaneously tiny and interconnected: suddenly it all registers in stark, microscopic detail.

For some, that surreality check is a gospel record. For others, it's a sunset. A child's face, a mother's, a birth or death or a fugitive smell out on the street which instantly brings a loved one back to life. For perfume lovers, it might be finding that holy grail perfume. There among the dross of the mass market miasma might be--Eureka!--a vintage, unopened bottle of Magie Noire, Nombre, or Mitsouko. Such shocks to the system, rare enough on e-bay, are even harder to come by in contemporary perfume. So many fragrances flood the market annually that we lovers can become very blase about it all. More pink pepper, you say? Damn. Now that's a dilemma. I really wish I could buy it--but I just don't want to. There are still amazing perfumes being made, and by amazing I don't mean really beautiful or truly great. I'm talking about a perfume that recalibrates the cosmos for you.

Breath of God, in addition to being a gospel CD, is also just such a perfume. The supposed seven days of creation play out on your skin when you splash some of this preposterous stuff on. You can smell the barnyard (thank you, cade oil) and the orchard, the sky and the ground and everything in between. This perfume takes chances, reminding you of the high humor involved in a world which mixes nylon fanny packs and Bentleys into the same big pot. You might not like the results, but you're sure to be caught off guard.

Breath of God is made by B Never Too Busy to be Beautiful, a vegan cosmetics manufacturer related to Lush. The packaging and the overall aesthetic are similar enough that you might understandably confuse them as the same company, but there's nothing remotely close to Breath of God, as one would secretly hope. It comes in a silly, playful bottle perched on a pedestal. Its composition is equal parts Inhale and Exhale, both of which are fragrances themselves, also sold by BNTBTBB. There's a definite tension within Breath of God, creating the sense of yin and yang, its black and white halves roiling around like a winking Jesus. It doesn't do a lot of staying still, though it maintains its remarkable balance in movement. Breath of God contains cedarwood, rose, ylang ylang, vetiver, lemon, grapefruit, neroli, black pepper, sandalwood, and that wallop of cade, or so says the ad copy. What it smells like is much harder to break down, as it probably should be, with a name like that. In a flash, it goes from fruity to woodsy, from petrol to herbal, and back again.

I'm a fan of Lush's Karma, which I've tried in solid and own in liquid form. I wear it often. My good friend enjoys smelling it, though he says he wouldn't wear it. Breath of God would probably elicit the same verdict. I'm not sure that's such a problem. I know many people who admire Bandit's audacity but would no more put it on than they would a piece of ready-made art by Marcel Duchamp. Breath of God has that fearsome impressiveness to it. There's a lot of wit in there. It goes further than many perfumes dare, displaying a fascinating combination of finesse and crudity, a dual personality that feels, in practice, perfectly harmonious. It feels full, a double CD worth of inspiration. Breath of God is a breath of fresh air.
Posted by Brian at 12/30/2008 12:31:00 PM

Lovely review, Brian! I keep hearing about Breath of God, but I can't seem to find a sample to save my life. None of the usual suspects carry it-- the perfumed court, posh peasant etcetera. Do you have any recommendations? Thanks so much!

Hey Katie, thanks. Actually, when the BOG came in the mail, it was accompanied by a catalog. Apparently, you can get samples of all of the B Never fragrances for something like 35 American dollars. It's 24 pounds, whatever that converts to, for all 10 scents. They have a cheaper sampler pack with six scents but BOG is not one of them. Shock: It isn't their bestseller. I don't know what the shipping would be either but I intend to order the samplers soon, after smelling Breath. Most of the scents also come in smaller atomizers. The full bottle I bought is 33 grams, which is a little over an ounce. I believe a gram equals a ml, more or less. The samples are 1.75 grams. The atomizers are 9. The website:

The full sampler pack is item 9701 in the Autumn/Winter 2008 catalog. Let me know what you think if you decide to order.

Thanks so much for the info! I promised myself no more samples until I smell through my Christmas presents... but I may just have to make an exception ;)

Whoa! Anything that promises to "recalibrate the cosmos" for me deserves at least an interested sniff.
Thanks for an inspired review!

Nice review Brian!
I'm in the 'admire it but can't wear it' camp with BOG. It keeps distracting me, so I can't wear it for work, and it's a bit too strange for a night out. I do wear Exhale and Inhale sometimes, though.

I'll be interested to read your thoughts on their other scents, once you get the samples. I have either tried, or own, most of them - apart from their latest, Superworldunknown.
To my nose, they range from lovely (B Scent, 1000 Kisses Deep) to WTF? (Ladyboy - banana and violet. Seriously?)

Perhaps you should also try the Retro Lush range - Icon, Flower Market, and Ginger. I love Ginger, but to me, Icon seems harsh. On the other hand, it's the same 'harsh' I find in Karma - which I don't like, but you do. So perhaps Icon would please you!

Thanks for turning me on to Icon, Tania! I forget you're "over there". It sounds exactly like my cup of tea. Is it patchouli-based? Balsamic? The write-ups make it seem so. Funny you should mentioned BOG in the workplace. On my way out today I reached for it, then reconsidered, wondering if my co-workers would want that kind of epiphany first thing in the morning.

Brian,
is there patch in Icon? Wait a sec, let me go sniff...
yes. Also myrrh, bergamot, and orange blossom. Dunno about balsamic - it may be, I'm just not sure what that is supposed to smell like.

The top notes are a tad 'biting' for me at first, as with Karma. But having just tried it again and given it some time, there's something about Icon I enjoy. It's like Karma's Goth sister.

Exactly! ;-) So I tend to reach for their Inhale body spray instead - some of the same elements as BOG, but lighter and non-colleague-scaring.....

After reading some "wow" and some "yuck" comments about BOG, I decided to try a sample (got mine from theperfumedcourt.com). Initial scent to me was of crushed walnuts, then a whiff of lilac and cinnamon. Buried deep is some fresh compost, smoky incense and a green herb (thyme?). I must say the spray perfume diffuses around the body better, and after wearing it for perhaps an hour, I've had people come up to sniff me, wondering what perfume I was wearing, then come back and back for another sniff. This perfume is very complex, intriguing and fun, but I'd call it a "strong woman" smell, a rather old-fashioned-real-French-type perfume instead of a foofy floral.