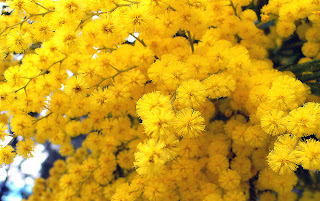 There are three floral notes that, when done well, make me swoon like crazy – orange blossom, linden and mimosa. I’ve smelled orange blossom and linden in nature and they’re two of the most mesmerizing fragrances on the planet. I haven’t yet come across mimosa in nature so I can only imagine what it must smell like. When I think about these three scents, I realize there’s a similarity – they’re all are rather light, airy, sweet yet green.

I did a bit of research about mimosa since I’m unfamiliar with the plant. I found that the mimosa used in perfumery (usually listed as acacia or acacia farnesiana) grows in southern France and Italy with bright yellow blooms. There is a related plant that’s oftentimes called mimosa which grows in the southern U.S. and Hawaii. The blooms of this plant are purplish pink and the scent is similar but this is actually the silk tree, not true European mimosa, and not the same species used in perfumery for centuries.

Givenchy’s Harvest edition is similar to the original Amarige but it is so much better. It’s as if Givenchy highlighted only the best parts and minimized all negative bits of Amarige creating the most gorgeous, mimosa-orange blossom-oriental scent in this galaxy. Mimosa takes the spotlight in this scent and the overall effect is much more delicate and airy and gentle. The original Amarige is known to be a loud scent and while the 2007 Harvest edition does have nice longevity it is a good deal softer and does not pack a wallop like the original. This is a softly spicy and well-blended mimosa scent which is vivacious and flirty instead of girly and innocent like most mimosa scents.

L’Artisan’s Mimosa Pour Moi was a pleasant surprise for me. The surprise being the longevity, which is decent for L’Artisan, and on top of that I would never have expected a mimosa scent to be one of their more tenacious fragrances. Mimosa is generally a light, soft and fleeting aroma but somehow L’Artisan managed to create a scent that is heavenly and even sticks around long enough for me to enjoy it for about 3+ hours.

Parfums de Nicolaï Mimosaique is actually my favorite mimosa scent. Mimosaique is nothing short of nose nirvana. I wish I could bathe in this stuff, wash my sheets in it, use Mimosaique soap, shampoo, hand cream and burn candles made from it. Maybe it’s just me, but I’m nuts about Mimosaique. Here’s the problem – it’s the most fleeting of these three scents. Yesterday I sprayed Mimosaique on one arm and Mimosa Pour Moi on the other and I could smell the L’Artisan for at least 2 more hours. Patricia de Nicolaï, if you happen to read this, would you please do something about the longevity? I beg thee! Mimosaique is a stunning masterpiece of fresh, sweet, green, airy, delight and happiness. For me, it’s an anti-depressant in a bottle. Utterly beautiful.
Posted by Abigail at 12/04/2008 11:46:00 PM

Givenchy Harvest Edition sounds heavenly. I've been trying to score a sample since the last time you wrote about it.
I like Mimosa pour Moi a lot and find it a relaistic, if softer version of the real flower. Real flowers have a delightful bitter-powdery-green edge and are pretty intense.
Love your blog, thanks for writing it!
Nika

Great Blog....mimosa looks like an Australian native, wattle. The scent is similar too although the pollen-y powder holds me back from diving straight into it.

Ha mimosa. Here in my neighborhood in Sa Paulo - Brazil there is a place called Rua das Acácias (acacias st.) so guess how it smells?? A- mai-zing.
In nature I love magnolias and frangipanis. I also love the scent of a type of orchid that I have in my living room.
I recently discovered Calicantus - a flower from venice - Italy.
You have to smell it, it is simply divine!
Loved the posting, Simone.

Nika,
contact me - I'd be happy to send you some Amarige Harvest edition.:-)

Emma,
Yes, I read that Wattle was another plant similar to European mimosa Similar to Silk Tree in the U.S. isn't exactly the same species used in perfumery. But surely it smells divine. Too bad the pollen keeps you from diving in!

Simone,
I want to live on Rua das Acacias!!

Hi Abigail,
i just now noticed your generous offer of a Amarige harvest sample, thanks so much.
I tired to email you but the email button doesn't seem to work.
here's my email:
nypogodi at yahoo dot com/
Thanks!

Andrea Karim said...
This comment has been removed by the author.
January 04, 2009

I talked myself out of buying the 2007 Harvest edition of Amarige and have been regretting it ever since. I know that I can still get my hands on a bottle and will try to do so - I managed to order the 2006 version, and it was NOTHING like the 2007. Isn't that weird? I never believed the wines would be different from year to year, either, until I started seriously tasting them.

A few years ago, I lived in a crappy apartment in north Seattle that happened to border on a rather nice, unpaved alleyway. I would walk my dogs up the alley three times a day, and for a couple of months every year, I would pass a neighbor's yard that was rendolent with the most wonderful fresh, floral scent that was utterly unplacable, but clearly coming from a large tree the dominated the property. The tree was covered with strange, bristle-y looking flowers that were pink at the ends and green in the middle (they looked very similar to the mimosa flowers that I see when looking at the Wikipedia page on mimosa). Upon spying the neighbor doing some gardening one day, I asked her what kind of tree it was, and she had no idea. I'm started to think that it must be related, however distantly, to the mimosa plant, because I get the same olfactory high from spraying Mimosa Pour Moi or Givenchy Harvest 2007 Amarige Mimosa as I did when walking down that alley.

And now, reading your response, Abigail (btw, that's my favorite name ever), I see that it is, in fact, the silk tree (albizia). In fact, some of these grow near the school just blocks from my house in Seattle. The smell in April is intoxicating!

The 2007 Harvest Edition is still available from Nordstrom online... not to enable you... I've had to talk myself out of buying another bottle several times now. ;-) And it's worse with a limited edition - once it's gone it's truly gone!

Thanks for this comparison of mimosa frags! I am a mimosa maniac, having lived near the blooming trees for some time. Mimosa-lovers--be sure to smell the real thing. Mimosa absolute (on which all of these frags are based) does not really smell like mimosa. It smells good--but there is nothing like the real flower--unfortunately.

ahhh smelling a mimosa flower as I type! they are in bloom down the block from were i live. thanks for the list of perfumes! this is the most divine smell ever. you should check out tokyo milk perfumes, you won't be disappointed :) http://www.beautyhabit.com/tokyomilk_parfums.html.

I, too, had never seen or smelled a mimosa flower. I am in Australia and I knew they looked like our wattle. Last month I was in Egypt visiting a temple on an island in Lake Nassar and I got this smell - it stopped me in my tracks. I couldn't help but smile - itmade me feel so wonderful and happy. I looked up and there it was - I knew it was mimosa and now I'm hooked. Today I bought a Mimosa perfume by L'Occtaine - not too bad. A single note (I think) and very evocative. It took me straight back to that temple in Egypt.