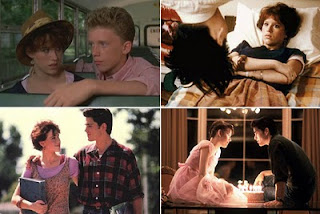 Say the name John Hughes to many people of my generation, and you see instantly how deeply the man and his movies permeated our young adult lives. I saw Sixteen Candles my first year of high school, right around the time it hit the mall. I remember thinking, before I went into the theater, that I would hate it, that I would have to. The ads made it sound like a typical teen exploitation flick, a la Porky's. The movie hadn't gotten too much buzz by then and I didn't know a lot about it. I was embarrassed to be seen at it and hoped none of my classmates would be in the audience. I was still busy convincing them I was cool enough to be their friend. In my mind, I was much too grown up for such a film.

Very few movies have affected me the way Sixteen Candles did. There's something so naive in it. There's a real emotional alchemy there, perfectly sent up with humor, some of it slapstick, most of it painfully adroit about the angst involved in being that age. In my now woefully long movie-going experience, only a small handful of films generated this kind of exhilaration in me, that feeling, when you leave the theater, of having seen something truly great, maybe even profoundly good. I wasn't embarrassed to say it after seeing Sixteen Candles because of course the movie, though officially about teens, isn't the slightest bit juvenile. It wasn't just that John Hughes understood what it was like to be in high school. He seemed to understand something essential about being human.

There is a lot more diversity in the Hughes films than people give them credit for, though it's true the films got darker and a little more distilled after Sixteen Candles. Sixteen was full of the sight gags and an irreverent bawdiness typical of National Lampoon Magazine, where Hughes had worked for some time. It still had the residue of the Chevy Chase vehicle, Vacation, one of the first films Hughes had written. Vacation had just come out the year before--and was a huge success. Hughes revisited that particular sensibility, that outright zaniness, in his teen films only once, with Ferris Bueller's Day Off, where Matthew Broderick speaks to the camera and channels in and out of musical interjections with an almost aggressive, jacked up perversity. Otherwise, things got much more serious, like a kid who loses the last of the baby fat and is suddenly, as if overnight, "all grown up".

Breakfast Club recombined and refined the elements of Sixteen Candles, stripping them down to their basic attributes. It locked the quintessential types of the high school experience into a room together, playing them off each other, with less laughs and more tears. Bueller, like Sixteen Candles, was high school as a Marx Brothers film. Breakfast Club was high school as high melodrama. It's the melodramas most of us remember, because in some way they came closest to the tortured core of adolescence. Pretty in Pink and Some Kind of Wonderful, more melodramatic still, were written and produced by Hughes but directed by someone else. Yet all the elements of that imaginative kingdom are there: the popular kid you can't have, the disregarded geek who turns out to be the most interesting person on the planet called High School, the heart to heart talks with dad on the couch, the annoying kid sibling who ultimately becomes the protagonist's fiercest defender, the missing or abandoning parent, the wrong and right sides of the tracks.

Watching these movies today, I cycle through the weirdest feelings and memories. Movies are a lot like perfumes in several ways. They rush things back at you. Certain recollections, mostly ephemeral (the smell of your classmate's hair, the feel of the plastic seat in Algebra), have been inert, you realize while watching these films. The movies reactivate those memories with an almost painful intensity. And on those little details many deeper, forgotten scenes piggy-back, stampeding back into your adult consciousness. I hadn't seen these films for several years. Some I hadn't seen for at least a decade. It isn't just that, watching them, I remember what it was to be young. It's also the fact that I'm remembering from a vantage point I couldn't have imagined back then. Back then, youth felt like a trap. Now I couldn't get back there with all the money in the world. I wanted out like you wouldn't believe. Now I'm out, and for good. Like smelling a perfume my grandmother wore, the Hughes movies transport me back to a time which is totally lost to me, and I go back with the regret and bittersweetness of adult experience, a special kind of understanding I wish I could share with my younger self, and a stodgy stupidity I know my younger self would have laughed out of the room.

Over the course of the week, Abigail and I and several other bloggers will be stepping into the shoes of some of our favorite John Hughes characters, figuring out what they meant to us. Stodgy stupidity be damned. People remember Molly Ringwald, who became the poster child for the era, but there were so many memorable characters, big and small, in the Hughes cosmos: Duckie, Amanda Jones, Jake Ryan, Blane, Iona, Cameron, Jeanie Bueller. The films and their characters are time capsules of the eighties, and we're using them as a kind of time machine. From inside that perspective, we'll look not just at those films and their depiction of the high school experience but our own experiences, too, in all their screwed-up, heightened, angst-saturated detail. Starting tomorrow, we'll be raiding the perfume counters of the period, spraying up the high school hallways and libraries with the memorable, big shouldered scents of that decade. Look for us in the hallways, the library, and the gym, surrounded by the potent, armored mist of tuberose.

While you're at it, check out the fantastic series on eighties fragrances over at One Thousand Scents. I've been enjoying these reminiscences immensely, and I'd be lying if I told you they didn't have something to do with our own. Another inspiration, if you're at all interested, is this book on Hughes and those films I've been reading, which is wonderfully chatty and informative.
Posted by Brian at 12/12/2010 11:08:00 AM

Brian, I look forward to reading what you guys come up with me, I can already imagine the characters and matching fragrances. What fun! I share these JH movies with my own daughters now and it's lovely to know that they enjoy it too even if they think I'm hella cheesy. ;)
"Pretty in Pink" was my movie.
Molly was my heart! And I even wanted to dye my hair red.....

Funnily enough I sat up late last night to watch a favourite 1980's movie and blog a tiny bit about it . I have never seen the one you mention but as Holly and I are collecting D.V.D's for Christmas I'll list it . I don't think any fragrance would match my favourite . I loved Chevy Chase ,there is a Steve Martin film in which actors who are supposed to be Mexican heroes are hired to save a Mexican village from bandits. It is full of cliches but the scene with the invisable man will always come to mind on odd occasions and make me laugh out loud . I admit to wearing Laura Ashley perfumes in the 1980's .

Great idea for a blog project, I'm looking forward to reading it! Those movies were the background of my teenage years.

Oh dear. Revisiting my youth... it's good to do it from time to time, I suppose. I didn't have a particularly angsty teen-hood, I had a dull one, but even so, thinking about those years is bittersweet.

I've been enjoying Pyramus' posts on 80s scents, too. I'm just a little disappointed that he never seems to reply to comments, though... he always seems to have something insightful to say at NST. Too, when someone opens up in a personal manner in a blog post, and commenters share in the same spirit, it's disheartening to think he's not reading the comments. I dunno, maybe he's too busy. I'd send him an email and ask directly, but there's no link on his blog.

The potent, armored mist of tuberose is a welcome companion in this hideous cold we've been getting here!

The background indeed, kjanicki. Angela, you must watch them all: Sixteen Candles, Some Kind of Wonderful, Pretty in Pink, Breakfast Club, Ferris Bueller's Day Off.

Muse, yeah, I'm with you. It's confusing. I too have commented on his blog and you always hope to get a response, right? Every once in a while he seems to.

This is so good. Thank you.