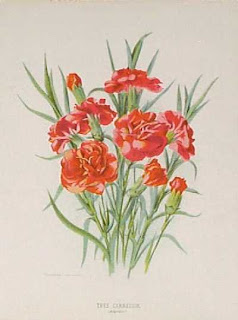 Something happened this year. This Fall. Is it because the Summer was so extreme? I could barely smell anything the last four or five months. Spring shot past without registering, plunging us into one of the hottest Summers on record. In that heat, it wasn't just that my skin ate up perfume. My nose didn't seem to be functioning properly, either. I was like the squirrel who thinks the sky is falling in. I forgot, I guess, that seasons pass. I'd started to think it would always be that way. I'd just never be able to smell much again.

So Fall has been a real bargain for me. I always rediscover scents I'd forgotten about when October rolls back around. But I rarely reassess them so drastically. I'm looking at and smelling things in an entirely different way. Logic would dictate that only lighter fragrances reinvent themselves in cooler weather: the cold prolongs their effects, for one. But I'm finding that even heavier scents seem like different beasts to me.

The other day, I sprayed on some Shocking! by Schiaparelli, and I was astonished at how deeply I'd previously misapprehended it. I've always loved it, but many of its subtleties were lost on me. I could smell clove, honey, and rose, the polar points of the fragrance. I didn't think of Shocking! as anything remotely close to subtle. The name wasn't at all ironic to me, despite the exclamation point. All I got was the bombast.

This time, I could smell the imaginary places in between, the intricate tensions created by such bold juxtapositions. The tarragon up top was more discernible. I could discern between the tarragon and everything else going on in the opening. And I appreciated the slow, inexorable descent into patchouli, civet, and labdanum, as well as the influence of , I think, vanilla. I'd always thought of Shocking! as a heavy tank of a scent (a good thing, in my opinion) but smelling all these things at play I've seen more clearly how the scent fits into the Schiaparelli sensibility; like a giant lobster on an elegant evening gown, yes, it's somewhat jolting. But the gown is definitely there to give the kitsch emphasis and contrast, taking it into irony.

My bottle is probably from the seventies, possibly the eighties. The ingredients list only parfum, alcohol, and aqua. Shocking was created in 1937 by Jean Carles, the nose behind tweedy green fantasia Ma Griffe and--more tellingly, in this context--Tabu. I have no idea what Tabu once smelled like. I imagine it possessed a lot more of Shocking!'s subtleties.

I've owned it for well over a year. So I had it last winter, as well. You would think I'd be more than a little familiar with its range. To me, it was merely an Obsession clone. It came out in 91, five or six years after the cultural landmark which was Obsession. That fragrance has changed significantly over the past five to ten years. Obsession is still Obsession, but more piquant up top, more shrill overall, and much thinned out toward the bottom.

I assumed, smelling Krazy, that Krazy gave a more accurate indication of what Obsession once was. What I see this winter is that Krazy, though it speaks the same language, has a slightly different inflection and is much softer at the punctuation points. Krazy is hard to find now, but I've been fortunate enough to find two bottles: one in edp, the other edt.

Several things strike me as being significant differences between Obsession and Krazy. Krazy's pyramid includes Lily-of-the-valley and aldehydes. I believe the Lily-of-the-valley must give it that dulcet quality which sets it notably apart from Obsession when you really get down to it, providing a note of weird, unexpected dissonance, a muted counterpoint. The aldehydes give Krazy a quality of amplification as well. It was interesting to rediscover Krazy lately, because the perfumer behind it, Dominique Ropion, is much discussed these days for what I suspect is a far less interesting or compelling fragrance, Portrait of a Lady.

This one disappointed me when I smelled it a few years ago. I bought it, then returned it, having smelled it all day on my hand. Too subtle, I decided, or something to that effect. It's hard to remember what I was thinking at this point because I like it very much now, and smell it wafting up from my skin for quite some time after application. On the reviews sites, Carnation is criticized for the candied red hots quality people say it has. Too much clove. Not enough persistence. Where's the rose?

I do smell the rose now, where I didn't before. Yes, it is submerged under a rather formidable clove and cinnamon one-two punch. You still feel their impact, but rose softens the blow. Jasmine is listed in the pyramid but I'm still not getting that, however enlightened of late I am. What I'm getting now and missed before is an update of a classic carnation soliflore: rather than the dainty budoir carnation of old, this one radiates with a modern kind of warmth and assertiveness. It feels both friendly and fearsome; there's the slightest bit of edge there.
Posted by Brian at 12/09/2010 10:14:00 AM

I quite like Carnation...seems a tad "simple", but still good stuff. Also, I love the plastic-y stuff they coat the bottle in. Points for tactility.

I was possessed by a carnation-bug, but I opted for Caron's Bellodgia since it was a bit cheaper, and I didn't want to risk disappointment.
Unfortunately, it had a weird plastic after-smell. I realized where my carnation-fixation came from as I walked by a scented pine-cone display in my A&P- they smelled of cloves!
I think the CDG series are very holiday, fall happy clove-y

"imaginary places in between"- so well put!

By an amazing coincidence, I put on CDG Carnation this morning not half an hour before reading this. Unlike you, I didn't ever have to reconsider: I loved it from the moment I smelled it. (I can't get enough carnation, possibly the most masculine of the florals, second maybe to lavender.) I don't know what I'm going to do with that huge (100-mL) bottle, because I wear it like six times a year, but I'm glad I have it around for cold mornings like this that need a jolt of carnation-y heat.

I think it is simple, Dane, but pretty rich. I love the bottle too.

C&B Fan, out of curiosity, what other carnations did you consider? I saw one once and didn't get the name of the brand and have wished I got it while I was standing there ever since.

Thanks, Marina! I know my Shocking! isn't nearly as good as vintage vintage, but these days, with so many restrictions and butcher-jobs, 80s and 90s is practically ancient. Old or older, Shocking! is such a great fragrance.

Pyramus, I had someone pick me up a bottle from Perfume House in Portland when they were coming for a visit here, and when it and they arrived I thought, Oh, why did I buy this? I forgot about it for a month and pulled it out the other day and thought, Why did I ask myself why I bought this?!