Dandy of the Day: Jane Bowles 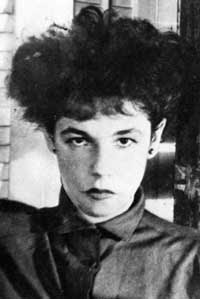 Wife of Paul, and famously lesbian, Jane Bowles was a fascinating anomaly. How to explain the relationship between these two authors; both equally queer? Jane's writing was often (and even now) overshadowed by Paul's (The Sheltering Sky, et al), yet in some ways her work was perfectly comfortable in the dark. Her wryly comic characters smuggle ferocious idiosyncrasies. In "Camp Cataract", a woman comes to remove her deranged sister from the clutches of a rural retreat which has taken her imagination over the edge, with disastrous results. In Bowles' single novel, Two Serious Ladies, Christina Goering is a wealthy spinster in pursuit of sainthood who ends up as a high-class call-girl, while Frieda Copperfield leaves her boring husband and heads for Panama where she falls in love with a prostitute. Jane Bowles was as complicated and unlikely as her characters and the situations they found themselves in. Writing was an arduous ordeal for her, and in her lifetime she published very little; along with Two Serious Ladies, a play and a body of short stories. She eventually followed Paul to Morroco, where he chased boys and she fell in with a local woman named Cherifa who some believed poisoned her, hastening her early death. She was under-appreciated by the public at large, and chronically insecure, yet critically revered. Poet John Ashberry called Bowles "one of the finest modern writers of fiction in any language." Truman Capote considered her "one of the really original pure stylists".

An obvious choice for Bowles would have been Bandit. The contradictions embodied in Cellier's constructions are perfectly in keeping with Bowles' askew outlook, apparent in almost any line from her writing: “She was torn between an almost overwhelming desire to bolt out of the room and a sickening compulsion to remain where she was.” A more unexpected choice might be Heeley's Fine Leather. Fine Leather, too, is a contradiction: it smells more like hay than hide, evoking the sickly sweet aroma of an evacuated horse stall. Underneath this, a honeyed sweetness. Some people think of Chanel's Cuir de Russie when the word leather comes to mind: of sweetness and the supple, well maintained car seat of a Bentley. Others, like Bowles, go into the barnyard, lifting the saddle to find the smell it left on the horse's perspiring back.
Posted by Brian at 7/31/2008 10:26:00 AM