Alien: Back to the Future

Some scents are so comprehensively maligned, so universally derided, it's a wonder they don't burn through your skin, drip onto the floor, burn through the floor, and drip onward into the basement to form a permanent, toxic cesspool. What is it about Thierry Mugler's Alien that people love to hate? Bloggers discredit the fragrance without reservation. Those who like it at first ultimately confess to have been mistaken. It has the kind of sillage and persistence most of us wish other favorites had, yet we consider it inexcusably pushy. Is it really any more insidious or pernicious than Comme des Garcon Zagorsk or its brethren incense fragrances? Is it any more likely than Mitsouko to give those unlucky enough to wander into our ten-mile radius a side-splitting headache? Mitsouko EDP is gorgeous, to be sure, but arguments in favor of its magnificent subtlety fall flat with me. 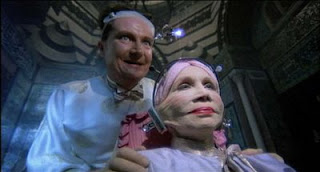 There, it's out, and I feel better. So I'm not the perfect perfumista. I appreciate the vintage Guerlains, I adore L'Artisan, I'm conversant in Etat Libre D'Orange and Lutens. I can smell and identify unlabelled bottles of Chypre Rouge, Chanel Coromandel, Caron Parfum Sacre and Vol de Nuit. I know who Chandler Burr is. The names Luca Turin, Tania Sanchez, Christopher Sheldrake, Annick Menardo, Jacques Cavallier, Guy Robert, Roudnitska, and Polge roll off my tongue with a fluency reserved for seasoned snobs. And I have dozens of scents which will end up on no one's top ten list but are in heavy rotation in my perfume cabinet. Alien is one of them.

You dare me to wear it every day? Then I'll see, you snicker. It will seep into my brain and etch its crazy-making patterns into my cerebellum. My frontal lobe will disintegrate in retaliation. Wear it every day, you advise, and I'll see very quickly what a novelty my fondness for Alien is.

You're so silly. I don't wear anything every day. Not even underwear. There isn't a scent in my cabinet, that I can think of, which I've worn more than one day in a row, and very few I've stayed with throughout the morning and into the afternoon. Another confession: typically, I wear more than one fragrance at once. Sometimes, okay, often, as many as four or seven. The curious thing is, when I wear Alien, I tend to wear nothing else.

Alien was created by Dominique Ropion and Laurent Bruyere. I've enjoyed many Ropion fragrances: Vetiver Extraordinaire, the much-maligned Amarige, Carnal Flower, Safari. I own all of those but here's another heresy: I like Alien the most. Surely I'm sick in the head. Certainly my license to blog must be revoked.

I'm not saying Alien is the best perfume ever. I'm saying I like it very much. I also like a cheap perfume called Benandre which used to cost about as much as a pack of chewing gum. Alien is a strong gust of jasmine, but an odd jasmine. Many people have commented on the disparity between Alien's smell and its name. Shouldn't something called Alien smell a little weirder? Shouldn't it smell like something out of H.R. Giger looks? To me, it's plenty strange. I smell the Cashmeran, a plush woodiness which registers right from the top and straight on into the dry down (from your skin to the floor to the basement etc.) I smell a soapy jasmine with no indolic undertones.

That makes sense to me. In space, I imagine, no one smells the indole when you wear jasmine. I do get some amber, and I even understand the conceptual idea behind "solar notes". I don't get "old lady" from Alien. I get "old lady" Alien, a playful interpretation of your mother's Sunday perfume. She's glowing from a recent meteor shower. The C-33-RID has combed and styled her hair in the latest fashion: Rogue Warrior Princess. Mechanical corsets have fashioned her figure into the hourglass she saw in a recent episode of Little House on the Late Great Planet Earth. She smells divine. After punching codes into her automated decant, after scanning photos from vintage issues of Vogue and Harper's Bazaar under its laser sensors, she was given a purplish elixir, its gelatinous contents producing a scrolling vapor above the bottle. It smells like she imagines her ancestors did, interpreted for the future.
Posted by Brian at 11/14/2008 10:54:00 AM

I love alien, too. I just purchased Alien Luminescente for the bargain basement price of $35 at a Douglas in D.C. I still have trouble classifying it. It's a creamy, citrus, floral blend. And I love the bottle. Note to self: must buy original juice soon.

I liked the luminescente. Is that the one in the orange bottle? It was lighter but just as powerful somehow, and all Ropion's doing, apparently. I wonder if it was meant to be an improvement on or a refinement of the original.