Juliette Has a Gun, Citizen Queen: A Review 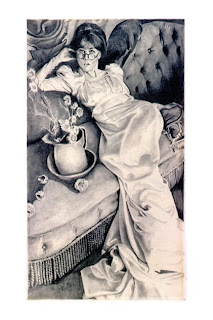 I feel daft. I just don’t understand what the name Citizen Queen is all about. Was there a Shakespearian heroine or a historical figure that I’ve missed? Citizen Kane? Nevertheless, the ad copy and imagery surrounding Citizen Queen seem to bring the point home for me: Citizen Queen, as a woman, is one rebellious, sexy, adventurous, pistol-packing, independent, goth femme fatal.

With all this imagery in my head, it’s difficult to smell Citizen Queen without envisioning this fiercely independent, ass kicking female. Oddly, if it weren’t for the marketing imagery causing me to see this woman I might see Auntie Emma, the well-read librarian, with strands of pearls and glasses instead.

So I have this confused image when I smell Citizen Queen. I imagine Auntie Emma with thigh high boots and a pistol in her purse. Hmm.

Well, I guess this is sort of what Citizen Queen is meant to smell like. It’s supposed to be a modern chypre – a classic animalic chypre which has been updated, softened and delivered to us, dressed in black velvet and pink bows, for 2008. True, Citizen Queen is not as bitter or heavy as the older classic chypres but it does pay homage.

Citizen Queen is one of those perfumes where it’s very difficult for me to pick out the individual notes. A general description of the fragrance is a musky, leathery scent with a soft powdered ambery quality that’s barely dusted with florals. I cannot identify the florals but I can smell the musk, leather and powdery amber quite prominently.

I don’t often receive comments on the perfume I wear, but in the past 8 weeks or so since I bought Citizen Queen I’ve received several compliments. The comments I’ve received are that I “smell good,” and “fresh” and “spicy.” Oddly I don’t think I would have said Citizen Queen smells particularly “fresh or spicy” but I suppose I can’t expect those who don’t have a perfume (ahem) habit such as me to say that I smell like “musky leather” or a “modern chypre!” The thing about Citizen Queen is that it smells really good. It is an attention getting scent so those who like introverted, quiet and soft fragrances probably won’t like this. I find myself liking Citizen Queen more and more each time I wear it. It’s definitely a leathery fragrance, but soft and powdery leather laced with sweet florals. I’ve mentioned “powdery” twice now and feel compelled to say that I don’t like powdery scents (Habanita chokes me) but Citizen Queen only has a smidgen of powder, not enough to bother me, so even if you don’t like powder you may still love this.

Citizen Queen smells really good, I love it. It is by far my favorite from Juliette Has a Gun. I imagine this will be among the fragrances I wear often – not one of those bottles I have and wear only once per year.

*This is my new rating system. 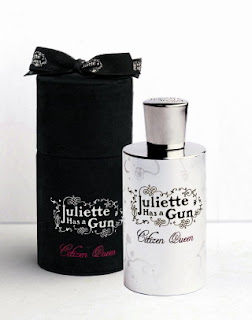