Gift Ideas from Bond No. 9

We received an email from Bond No. 9 announcing some of their new gifts ideas for the holiday season. Normally I ignore promotional emails but I liked this one because they’ve created some rather cute & glam gifts which are also relatively inexpensive. After reading about a new exorbitantly priced perfume from L’Artisan on Now Smell This I found these offerings from Bond No. 9 much more tasteful and indicative of our economic times. 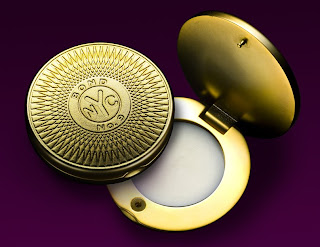 The Perfume “Token”
Bond No. 9’s solid perfume compact shaped like a NYC subway “token” containing your choice of six of Bond’s parfums. Stashed in its own perfect little white leather zipper case. The compact is refillable; the zipper case can lead a double life as a carry-case for rings, earrings, and lapel pins (with or without the American flag). Andy Warhol Union Square, Chelsea Flowers, Chinatown, Nuits de Noho, The Scent of Peace or Wall Street: $85. 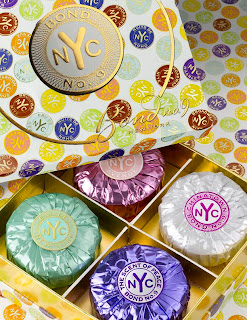 The Soapbox
Dressed in Bond’s colorful signature foils Bond’s guest soaps are clever “token” imposters that will have you wondering if they should be unwrapped at all? Nah, better to let the dinner guests go with unwashed hands. The soap boxes—displaying a field of Bond No. 9 “tokens” on an ivory background—are beguiling in their own right. A set of four (Chelsea Flowers, Chinatown, Eau de New York and The Scent of Peace): $95. A lone soap bar, available in six of Bond’s best-selling scents (the boxed foursome, Nuits de Noho and Wall Street): $35. 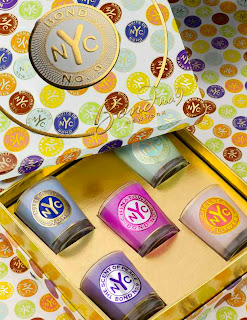 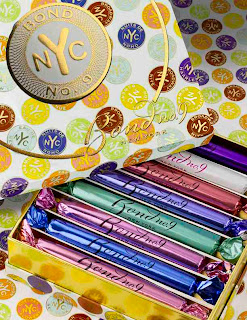 All-Around-Town Pocket Sprays
And, last but not least, my personal favorite, for those who crave a mini-miscellany of Bond No. 9 scents, Bond has introduced a box of eight pocket spray flacons, each containing a different New York neighborhood eau, and each delectably twist-wrapped in Bond’s award-winning signature foils. These are small enough to slip into an evening clutch bag, with plenty of room to spare. Plus, they’re refillable. $130.
Posted by Abigail at 11/22/2008 09:53:00 PM