Cavemen in Pinafores: Perfume Does Drag 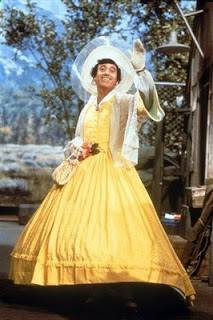 The other day, applying a perfume ostensibly intended for women, I thought, "I really better butch it up today if I expect to pull this one off."

Funny thing, though, how all that works: half way through the morning, I realized the perfume itself provided more than enough swagger. Maybe you know what I'm talking about. I'm talking about the kind of fragrance which can come across like Corporal Klinger on M.A.S.H. All the markers are there: the satin, the tulle, the rouge, some lipstick. The hair is curled softly; it just so happens it's growing on the chest.

Like many male perfume bloggers I'm decidedly androgynous in my tastes, and feel strongly that a scent, though it tells a story in the bottle, only reaches conclusion on the wearer. Fragrance colludes with personality, and often works wonders when played against type. A guy in Lolita Lempicka, as Tania Sanchez suggests, can be a startling thing, akin to seeing the same tired movie with an entirely different cast. I'm not averse to wearing the allegedly chronic girly, such as Paris, Joy, or Herrera. What I'm getting at here is slightly different: the scent which mixes messages before one even applies it, and presents an even more complicated story on the skin.

The most obvious choice would be Black Orchid, a scent I, like many others, go back and forth on. Just when I decide it's silly and overrated, it changes my mind. Regardless, it bursts into the room, rattling the glassware. I think back to the first time I experienced it, at Sephora. I sprayed it on the back of my hand and instantly felt as though I'd opened a porn mag inside the Hallmark store. It felt shocking, like Angel once had, so wrong it was right. I admired it the way I admired a drag queen I walked the east village with one Saturday night in the nineties, before the area went antiseptic. You never knew what might happen to you out on the street, unless you were with someone so flagrantly confrontational, in which case you could expect to be egged. This particular drag queen gave it as much as she got it, and seemed fifty feet tall. This was a personality with the power to affect whatever environment it entered, not just interacting with it but altering it. Whatever you think of the dress and the make-up, you have to admire the balls.

Poison is so deeply associated with mile high bangs and Mildred Pierce shoulder pads, so tangled up in a cluster of mental recollections of the eighties (often heightened to the point of distortion) that one easily forgets or is prohibited from seeing at all how essentially masculine it is. Forget the tuberose; to smell Poison is to inhale a strange medley of spices most florals avoid at all costs. Coriander and carnation give Poison a peppery, woody aspect, embellishing the perfume's feminine properties with such a wallop of gusto that the category short circuits. I wear Poison occasionally. Everyone recognizes it, until they realize I'm the source. Then they're not so sure. How could it be Poison? What guy would have the guts to put it on? That slight element of surprise can allow a mental adjustment, enabling one to experience Poison outside its enforced context of era-specific excess and unfortunate-to-tragic fashion misfires.

Like many of the vintage orientals, Bal a Versailles is a bit of a winking Jesus, first uber-fem, then a resounding baritone. Some might say that winking is decidedly coquettish, settling the matter. But Bal a Versailles winks at such a rapid clip that the movement ceases to register. What's left is a kinetic, subterranean interplay between gendered codes and preconceptions. Some say the opening is inarguably feminine. I say nothing is inarguably feminine. Tie as many strings of pearls as you like around the neck of Barbara Bush. Dress her up in dowdy. Tell me she's simply a very straightforward, no nonsense woman, a la Barbara Stanwyck or, less generously, Janet Reno (which opens up another can of worms). I'm still not convinced George Sr. isn't in fact a tranny chaser. Which isn't to say Barbara isn't a woman. Just to say that a man attracted to her has wonky ideas about gender and tastes which, if dissected, might reveal unexpected, category-busting rather than -defining answers. It isn't that Bal a Versailles is beyond gender, but how many distortion filters can you put jasmine and rose through before they start going the other way? Bal a Versailles is the answer in action, working itself out right under your nose.

Spend some time with the oeuvre of Bernard Chant, and you'll start to notice certain similarities, not just between the feminines but between the feminines and their male counterparts. Many of Chant's male and female fragrances are so close in composition that it becomes increasingly difficult to regard the line supposedly separating them as anything but a mental construct. I sometimes wonder if Chant was a conceptual artist working in the field of perfume. It's as though he was engaged in a lifelong experiment. Create scents which resemble each other so closely that to discern gender differences between them would prove a bit like seeing the Emperor's new clothes. The only truly emphatic separation between the galbanum-driven Alliage and Devin are a few yards of marble flooring at Macy's and Saks. Likewise the woody-herbaceous rose of Aramis 900 and Aromatics Elixir, while Azuree and Cabochard lock eyes with Aramis. Was it Chant's project to demonstrate how little tweaking is required to edge a masculine into the feminine and vice versa? The distinctions between his masculines and feminines are so subtle as to imply mere formality. It's interesting to see the male consumer's largely negative reaction to Devin, such that it is (the fragrance remains, like Aramis 900, little known). Alliage, on the other hand, seems better understood. But it operates on a decibel one would consider more robust than a proper feminine. And if you're a guy who likes your fragrances to last, hop on over to the women's department. The only difference that counts between Alliage and Devin, it turns out, is a matter of hours.

I wear Yatagan, Dirty English, Zizanie, Aramis, Giorgio Red for men, Tsar... and I wear Diorella, Caleche, Arpege and Jolie Madame. If it smells good and I feel good while wearing it I don't care if men are mentioned on the label. Sometimes what's good for the gander is also very good for the goose as well.