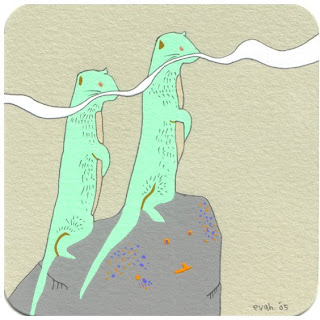 So often I read comments by fellow perfume fanatics on various blogs and forums that they don’t want the scent of their perfume to offend others. Most seem extremely sensitive and wary of anyone being able to smell their perfume, their sillage (aka scent trail) AT ALL. It seems that it’s now considered rude for anyone to smell your perfume except you. Perhaps that’s why L’Artisan is doing so well. Because surely, unless you have your nose stuck to your wrist, even you won’t smell a thing while wearing L’Artisan.

Oh, I sort of get it. I had a former colleague, who wore Giorgio, and she over applied it, to the point that her office perpetually wreaked of Giorgio as if she had sprayed the walls with it. I’ve also experience Calvin Klein Eternity on the subway, when the train had broken down, and the AC stopped, in the middle of July, and all of us passengers were cramped in that subway car like sardines with someone who must have mistakenly spilled an entire bottle of Eternity on herself (I had to think it was a mistake). So, yeah, I get it, it can be awful to be overcome by someone else’s perfume.

I’m *not* talking about over application. I’m addressing simple ordinary sillage. I absolutely want sillage from my perfume. I want individuals who enter my office to get a light whiff of my perfume. I want those who ride in the car with me, those seated right next to me, to smell my perfume. I wanted the person standing next to me in the elevator get a whiff. Call me crazy, call me rude, call me whatever you want, but I will not wear perfume that doesn’t have sillage. Without a doubt I wear perfume for myself. I wear perfume that I like, but I also unabashedly wear perfume so that others think I smell good (you can insert sexy, nice, unusual, smokin’, mysterious, in place of “good” depending on the day).

If a perfume is strong with mega-sillage, then I apply it lightly. I’d much rather have the issue of too much sillage, and adjust to a lighter application, than too little sillage, leaving me to douse myself to smell a damn thing. Take Lou Lou by Cacharel for instance. The past week I’ve had a Lou Lou reunion. Lou Lou has amazing sillage and longevity. The fact that I adore the scent of Lou Lou coupled with its tenacity and sillage means I think Lou Lou rocks the free world. Other good examples are Frederic Malle Musc Ravageur and Carnal Flower – props to Malle for these creations. Keiko Mecheri’s Loukhoum, while ethereal and delicate, is a beautifully tenacious juice – props to Ms. Mecheri for creating a sillage sensation. I could go on and on but you get the point.

I absolutely agree with you on the issue of sillage. Yay, I'm not alone!! I don't want to kill anyone with my perfume, but I wear it because I love the way it smells, and by golly, I want to get whiffs of it regularly :) And I don't think it's rude or insensitive for someone I'm standing right next to, to be able to smell it as well. I figure as long as I'm not pervading the space, it should be all good.

I think this is more about the way things are (especially in the US) today than the simple matter of sillage -- which I, too, love -- otherwise why even bother?

However...co-workers, especially in offices, especially in the cubicle farms that pass for them, tend to be bellicose. ONE person wearing too much perfume, who might "offend" the cubicle-neighbor who will then suddenly discover an "allergy" to scent, will then report the matter to HR and boom, next thing you know,an edict comes down banning all scented products from the office.

When I smell my vintage scents, even in EDT strength, I can tell that the world of the 20's through 70's must have smelled pretty good. Even the EDT's have huge sillage. But maybe people were just more tolerant then.

Hey gail & olfacta,
glad to know I'm not the only one!
and glad you understood I mean a very light sillage, NOT overwhelming and annoying other people.
yeah, the 20's-70's must have smelled amazing! ;-)
but I'm doing my part in keeping the 00's smelling good.

I definitely think people are less tolerant nowadays. Though I've never worked in (or heard of) a UK office which bans scented products, I've heard of US offices doing so. In fact, didn't a whole Canadian city ban scent? It's just plain daft.

So is the sudden 'one person has an ALLERGY so we all have to kowtow' thing. Making a whole office stop wearing scent because one person can't be arsed to buy some Piriton... hell no! I know what I'd say to that. Actually, I guess I just said it... ;-)

I want to share my perfumes, and I like to think I can do so without leaving a trail of unconscious folk in my wake. Plus, sometimes it comes in useful! On Saturday I sprayed myself with some Knowing from the store tester, then later I tried on some clothes. And if you've ever smelled a busy, over-hot ladies store changing room... well, I was just happy all I could smell was Knowing! And perhaps some of my fellow customers appreciated it, too!

I know I'm posting a comment here about 15 months after the fact, but I figure better late than never. I started working on a blog post about sillage yesterday, prompted by a request on fragrantica for a list of scents with big sillage, and came across this post while researching what people thought about the matter.

Incidentally, where ARE all these people who don't like sillage? I never see that... maybe I'm looking at the wrong times, or on the wrong fora. (I don't like MUA, and basenotes is strongly guy-centric, which is great for them and weird for me.) I always see perfume fans glorying in the radiant scents that trail.

Maybe it IS me. Maybe I was at a delicate stage of the development of my nose at a time when it was considered normal to bathe in one's perfume, which was typically a splashy thing like Opium, or those big '70's chypres. Maybe I just had one too many entertainment experiences, not to mention elevator rides, ruined by somebody's unrelenting perfume. I'd save my babysitting bucks for a few movies each summer, only to be asphyxiated by some selfish idiot swimming in Youth Dew. That can give a girl some prejudices...

And I do like to stand *next* to someone and smell their perfume - in a car, behind them in line at the bank, that sort of thing - but I also like the option to move a little further away and not smell it, if they've chosen something I don't care for. Two weeks ago, at my daughter's band concert, someone came in wearing Angel. She was sitting FIVE ROWS behind me, and yet I could smell her as if she were embracing me.

My personal scented zone is about a three-foot radius; inside it you might smell me, outside it you definitely won't.

it's mostly on MUA where many, many, many (did I say Many?) posters are terrified of sillage. if they receive a compliment they fear they're wearing too much perfume. I get the impression that sillage is a 'no-no' to the younger generation. i actually fear that sillage will go the way of smoking - that people will consider it offensive. Did you read the post somewhat recently (past few months) on POL about a 'No Perfume' sign at a doctor's office? Mon Dieux! I'm skeeerd.

Angel. Well, Angel is in a class by itself with nuclear sillage. I like it but I wouldn't wear it to the theatre or office anymore. But I do have the parfum now so maybe I could wear a drop or two outside of the house since the parfum stays closer to the skin... (see, MUA has instilled the sillage fear in me)

Ah. MUA... the forum filled with fragrance reviews that go, "My boyfrnd luvvvvs this cuz its so sxxxy!"

I have the impression that MUA skews fairly young, and you might be right about people who came of age in the era of non-perfume perfume like cKOne finding perfume offensive. Which is, indeed, scary. I mean, secondhand smoke can cause actual *harm*, not just the annoyance of sitting near some oblivious person marinated in, oh, Liz Taylor's White Diamonds. Where did we get the idea, collectively, that the world owes each person inoffensive surroundings?

re: your mini rant about owing others inoffensive surroundings ~
AMEN, SISTAH!
I don't know where this ridiculous idea came from nor do I know why it's sticking around. Honestly I think we've become far too politically correct (if this is the appropriate term). I think we just need to say it, wear it, dish it and own it much more often.

I love big-huge-monster-nuclear sillage. I would never spend a dime for something I am the only one who smells it! Everytime I go to sign a new business contract I put on Angel, or Samsara or Very Irresistible, or Ange ou Demon or Tresor :))) . They have to remember me 'cause I am NOT one of the crowd but a unique person. If they don't like it I couldn't care less. And of course, since I live in Europe we don't talk about artificial things like being politically correct. And in Eastern Europe we like to be beautiful sexy women ( at the office, at the market and at home). We have a saying here which says that a true woman should be a lady in society, a chef in the kitchen and a whore in bed ... Perfume and sillage are parts of our feminine personality. We would be ashamed not to asume it.