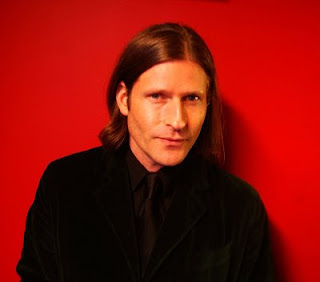 Some find it easy to dismiss him. He certainly gives them a headstart. To many his name has become synonymous with a litany of those adjectives reserved for the terminally idiosyncratic. Years ago, he took aim at David Letterman's head with his platform shoes and kicked his way out of the mainstream and into the margins. America knew him as the mesmeric goof-for-brains in Back to the Future, and the idea that he might not have been acting, might in fact be a genuine loose canon, made his mainstream audience more than a little uncomfortable.

Crispin Glover is one of the more fascinating actors to come out of the past few decades, mainly because he seems so out of step with the times. After various character roles throughout the eighties and nineties, he came to his own in parts which seemed to have been tailor made for his gifts. Willard, Bartleby, small but atmospheric bits for David Lynch, the Thin Man in Charlie's Angels. Ultimately, he came full circle, reuniting with Robert Zemeckis, the director of Back to the Future, in Beowulf.

He played Grendel, a role which in many ways presented a fascinating inversion of his painfully dweebish turn as Michael J. Fox's young father. Both were outcasts; each made a monster by his inability to fit in or gain control of his impulses or navigate the trecherous signposts of his destiny. Whatever you think of the movie as a whole, you can't say Glover isn't absolutely electrifying in it. During the course of his career he has written books, directed films (first What is It? More recently, It is Fine. Everything is Fine!) and traveled for speaking engagements which play more like vaudeville than book signings and question and answer sessions. Glover has smuggledthe avant garde into mainstream cinema and through mainstream cinema into the American living room.

Like his image, his cologne should be vintage, something from the fragrant yellowed pages of an out-of-print book. At night he might wear Etro's Messe De Minuit, a slightly oily incense recalling the damp stone walls of forgotten cellars and the ghostly suggestion of flowers once worn by the missing. He wouldn't pass up an opportunity to wear Black Phoenix Alchemy Lab's Zombi. Cinnabar, with its dusty cinammon (a crimson velvet pillow for the nose), would be a more arresting choice. Something about its spicy rich hypnotic quality, its fragrant whiff of port wine, slightly turned, seems in perfect keeping with his image.
Posted by Brian at 9/17/2008 10:21:00 PM

I admire Crispin Glover too... Although I never saw that film he starred in with all the rats- I heard that was very bizarre indeed! I liked your cologne choices for him- wouldn't it be fun to find out what he actually wears in real life?