A Tale of Two Lilies 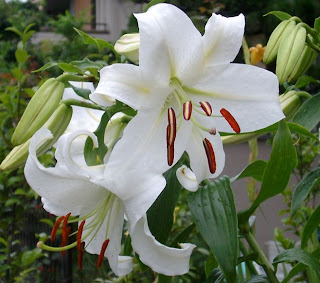 I’m not sure what possessed me but after looking forward to autumn for the past two months and anxiously awaiting the ceremonious rotation from summer to fall scents, I decided to wear two lily fragrances today. Once in awhile I wear two different perfumes into the office, but only if they are similar in nature. Today I wore Lys Méditerranée on my left arm and Un Lys on my right. All day I kept sniffing each arm and comparing the two perfumes. These are two big beautiful lily scents, but they have their own unique personalities to be sure.

FM Lys Méditerranée is a linear lily soliflore. It’s interesting to me that a true lily flower is not among the list of notes. There are flowers with lily in their name, but these are not actual lilies. Lys Méditerranée, however, smells like an enormous bouquet of white lilies with a few lilacs tucked in. I have Casablanca white lilies in my garden, as well as a lilac bush so the image I have when smelling Lys Méditerranée is a big vase of Casablanca lilies with a few bunches of purple lilacs artfully placed in the bouquet. There is almost very little else to say about Lys Méditerranée. If you adore the scent of lilies and lily perfumes then Lys M is a must. It manages to be sweet and floral but not overly so – it’s a soft and nicely balanced fragrance. In the background, there are hints of green, aquatic and spice notes, which I think are the elements that save Lys M from being too sweet. The green note, most likely from angelica root, allows the fragrance to be utterly wearable and keeps it from heading in the direction of air freshener. The aquatic note seems to make the fragrance realistic, as if you are actually smelling a vase of lilies, along with the leaves, stems and the water the flowers are standing in.


SL Un Lys is another linear soliflore fragrance entirely focused on lilies. And these are big, massive lilies. The only list of notes I can find are: lily, musk & vanilla. Comparing these two fragrances side-by-side allows me to smell that FM Lys M is rather soft and “fuzzy” in comparison to SL Un Lys’ very clear and realistic lily. Where FM Lys M smells a bit like lilies with green, aquatic and spice notes, SL’s Un Lys smells singularly of lilies to me. Un Lys, perhaps by the addition of vanilla, is creamier, dreamy and dare I say erotic? Well, yes, the aroma of SL’s Un Lys is of a grand, almost too-heavy-for-it’s-stem lily with so much pollen on it’s stamens that its drooping over a bit. Un Lys is a perfect, gorgeous lily who beckons flirts and romances bees and humingbirds to come pollinate it. Un Lys is a photograph of a lily where Lys Méditerranée is an impressionist painting of lilies.

In the end I can’t decide if I have a preference between the two fragrances. Perhaps I slightly lean towards Frederic Malle Lys Méditerranée because there’s a bit more complexity. But, for a person who hardly even likes lily perfumes (me), these are two insanely gorgeous lily fragrances that I wouldn’t hesitate to wear.
Posted by Abigail at 9/25/2008 08:54:00 PM