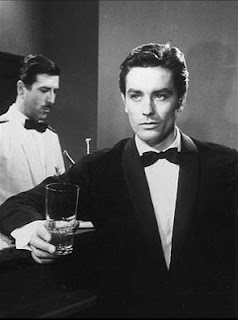 There's a certain logic, if not sense, to the complicated but efficient machinery behind most celebrity fragrances. After the marketing department finishes, Curious or Midnight Fantasy become, somewhere in the imaginations of their consumers, bottled essence of Britney Spears. Deseo and J-lo Glo are thought to embody the allegedly tempestuous spirit of their iconic Latina-American reason for being, as if containing something like civet oil, scraped from the mystery regions of the legendarily ample derriere la Lopez. Mariah Carey is a butterfly, slightly cheap, like the one adorning the bottle of "M". Lovely, at least, is true to its name, trading on Sarah Jessica Parker's racy Sex and the City character, Carrie Bradshaw, without sacrificing the well-intentioned, old fashioned earnestness which is believed to characterize Parker's offscreen persona.

As far as purity of intent, Alain Delon has more in common with Parker than, say, Celine Dion. His star, especially in France, shines brightly, and in fact he still releases fragrances for men and women, but his earliest efforts, much admired and in a few cases obsessively collected ("guilty"), have been discontinued. Unlike most every celebrity fragrance you can think of, Iquitos (1985), one of Delon's best, would appear to be completely antithetical in almost every conceivable way with the star's popular image.

Early on, he specialized in arrogant hubris. In Purple Noon, he became the first, mostly shirtless cinematic iteration of Patricia Highsmith's Tom Ripley. For Visconti, he played one of Rocco and His Brothers. A self-absorbed twenty-something opposite blank-faced Monica Vitti in Antonioni's The Eclipse, he was visibly contemptuous of her extravagantly placid angst, though without bothering to raise an eyebrow himself. Vitti was a static presence, idling through the movie as if slumped on a conveyor belt before rear screen projection. Delon, though expressively minimalist, was gymnastically cagey, impatient for action, opportunity, sexual intercourse, or whatever else came lumbering into his orbit. Tanned to a color home product catalogues might christen Smoldered Coco, surly in a way only the French have mastered, he exuded a chilling, cryptic moral ambivalence you felt uncomfortable finding yourself attracted to. Later, he played cops and gangsters, expressionless, callous killers in French neo-noirs like Flic Story, Le Cercle Rouge, and Le Samourai.

Where Delon was known for brooding tough guys, sleek like a cat but tortured, perverse and emotionally precarious, Iquitos, go figure, is forcefully lush and unequivocally androgynous, so uncomplicated about itself and its intentions that you assume it must be what it initially seems to be, a routine, straightforward variation of rose. It isn't--anymore than Delon was a typical matinee idol. In his prime, he was once called the male Brigitte Bardot--and not for any lisping hints of femininity. His charisma, conflating the gendered codes of sexual appeal, bridged the male/female divide, as does Iquitos. More aptly, he made the male in you feel like having sex with your female side, leaving you to watch like a panting voyeur. Surely many men wanted to be Alain Delon, if only to experience what it would be like to be that beautiful. IN a way, Iquitos provides this opportunity.

Iquitos opens big with cardamom and ginger. Not many fragrances can pull off the latter, and stumble through the attempt like a girl in her mother's high heels. Not so Iquitos, which walks a straight line in them (and in a suit!). There are green and citrus notes as well, and a breathtakingly pretty jasmine. The greens (most noticeably, vetiver) are packed down in damp soil. Aldehydes lend a projectile dimensionality to the rose. Patchouli darkens it, giving it a slightly grungy, woody aspect, a moodiness. This rose has a fair amount of stealth to it, growing earthier and denser as it dries down into its sandalwood, civet and leather foundation.

Rumors has it that Marc Buxton, the perfumer responsible for many of the Comme des Garçons fragrances which established that line's reputation, created Iquitos. It's a compelling theory, especially in light of Jil Sander's Scent 79 Man, another Buxton creation, released in 2008. 79 shares with Iquitos a certain quiet but robust formal elegance, balancing woody with floral in a way Buxton has made his own. Many imitate the effect. Few improve upon it. Add to this the fact that Buxton is known to have composed at least one other Delon fragrance, Delon Pour Homme.

Iquitos is a fantastic masculine which gives new meaning to the term, tossing the letters around. From masculine to..."lean music"? Or "lace in sum", perhaps. It was discontinued and is increasingly harder to find, so I'm relieved to own two bottles. It's an uncommonly brooding, intensely unique fragrance which would make perfect sense on either gender. And it lasts.
Posted by Brian at 1/25/2009 06:01:00 PM