About Names: The Basenotes Reviewers

Yesterday I posted the first in a continuing series surveying arbitrarily selected Basenotes.net reviews of individual fragrances, starting with Insense, by Givenchy.

As I read over the reviews, I started thinking about how people name themselves online. What do the Basenotes member names mean? I wondered. Why do people pick the screen names they do? By what logic?

I always assume the selection of these names to be highly coded and, to the casual reader, nonsensical, so imagine my surprise when I discovered that some of these terms come up on a simple Google search.

Here, for your future reference, is a brief glossary of the Basenotes screen names mentioned thus far.


Foetidus seems to mean bad-smelling, and is used in horticultural nomenclature to indicate slightly stinky. As in, fetid. 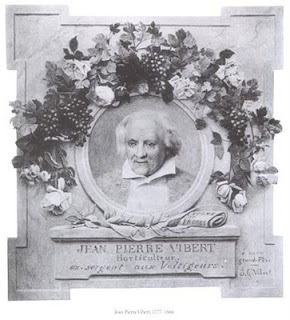 Vibert might possibly refer to Jean-Pierre Vibert, 1777-1866. According to an appreciation by Brent C. Dickerson, Vibert was the master rose-hybridizer of the first half of the 19th Century, introducing hundreds of roses from 1816 to 1851, man of strong opinions, courage, and discernment; enlightened, skillful author; soldier under Napolean! No one can study rose history or old roses without being surrounded by the name Vibert; no one can grow roses old or new without feeling his often silent influence. And yet, so modest was he about himself personally that most details of his personal life--even including what his first name was!--were largely unknown until, assisted overseas by a French colleague, I had the good fortune to be able to discover this personal data buried in French civic records and scattered as stray remarks in periodicals contemporary with Vibert. 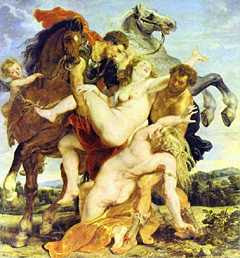 Dioscuri; Castor was the son of Leda and Tyndareus, Pollux the son of Leda and Zeus. They were brothers to Helen and Clytemnestra. Castor excelled as a horseman and Pollux as a boxer. They were great warriors and were noted for their devotion to each other. In one version of the legend, after Castor was killed by Lynceus, Pollux, in accordance with the classical tradition that one of every set of twins is the son of a god and thus immortal, begged Zeus to allow his brother to share his immortality with him. Zeus arranged for the twins to divide their time evenly between Hades and Heaven, and in their honor he created the constellation Gemini. The image at right is by Peter Rubens and is called The Abduction of the Daughters of Leucippus by Castor and Pollux.