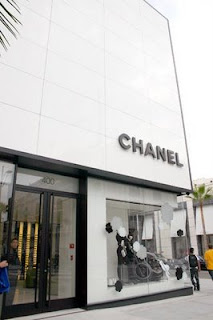 When I called and told you the bottle of Cuir de Russie you sent me was busted up, I was sure you wouldn't respond. I'd felt so out of sorts in your shop. I mean, it was Rodeo Drive. People were being shown little belts and things at the glass counter like a belt is a rare delicacy or a highly treacherous surgical procedure.

It was such a weird, alternate reality to me; so much money was going around. Everywhere I looked people were talking but all I saw was cash streaming out of their mouths. I saw dollar signs in their eyes. The boutique was its own eco-system, its own complicated trading floor.

I pictured all these people hopping back into their Bentleys at valet parking, fists of Chanel shopping bags swinging pendulously in their hands, zooming off to Beverly Hills, home again home again, where the biggest, most pressing problem was the apparent stupidity of the Mexicans who were supposed to be cleaning the pool, who seemed never to have seen a pool before, and were going at it with hedge clippers. I hated everyone in the store, Chanel, and I couldn't imagine all shoppers being equal there.

Oh I was mad when I received my broken bottle of Cuir de Russie. It seemed to confirm my worst suspicions about you, proving your contempt for anyone who dared spend less than millions of dollars at your store. I cursed you. I spat bullets in your general direction. I called up my pagan friend to ask about hexes and stuff. What an offense to the name of Jacques Polge, I thought to myself. If he only knew how his perfumes and the people who love them were being treated. Being alive, he might not roll over in his grave, but he certainly would when he got there, if this state of affairs continued.

I didn't expect you to return my call, Chanel, because you'd gotten what you needed from me and moved on. Knowing that I'm a perfume addict you felt confident in the certainty that you needn't do anything to make it up to me. I would keep coming back regardless. When you get some of the bad stuff, you keep going to the shifty-eyed guy on the corner, because the shifty-eyed guy on the corner has what you need. He might sell you baby laxative once or twice, but he laces it with enough of the real stuff that you can't split hairs. I'm not saying you're a drug-dealer, Chanel. I'm just saying you couldn't be counted on not to take advantage of my need, if the way my Cuir de Russie arrived in the mail was anything to judge by.

Imagine my shock when your friend Francisco called from Rodeo Drive. Francisco was sorry and wanted to make it better, and instantly I was embarrassed for the harsh words in my last letter. Perhaps you didn't want me to go fuck myself, or Jacques Polge, or whatever. Perhaps you really truly cared, Chanel. Francisco seemed to think so. His efficiency was impressive. He got right on it. UPS showed up the next day to pick up the Cuir de Russie. The day after that, Francisco called again to say he'd received the damaged goods and would send a replacement bottle right out. And he did.

I'm not going to waste a lot of time grumbling about the fact that when I opened the package there were no samples or testers or, like, a thousand dollar gift certificate to be redeemed at the Chanel counter of my choice. I was so happy to get my pristine bottle of Cuir de Russie that none of that mattered. Don't get me wrong. It annoyed me, but I was remorseful and contrite, and knew I should be kind after my hasty overreaction to your original mistake. I sat the big fat bottle of Cuir de Russie on my shelf, right at eye level, and gazed upon it lovingly for several days. I took the cap off, standing before the shelf, and held the bottle up to my nose, sniffing myself into ecstatic trances of narcotic oblivion.

My faith in you has been restored, Chanel, and I now believe (I now wish to believe, again) that though I drive away in my jalopy and have only one little bag clenched in my fist when I leave your premises, though I drive off sputtering toxins into the environment from a vehicle which barely passes emissions when that time of year rolls around, and end up far from Beverly Hills when I get home, and the closest I come to a swimming pool is the puddle of muddy water left on my back patio by a recent rain shower, I am just as important to you as anybody else you sell your love to.
Posted by Brian at 8/16/2008 12:12:00 PM