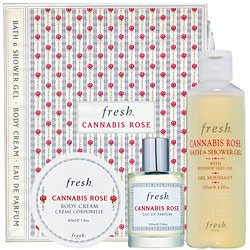 Cannabis Rose is the latest in a line of fragrances by the Fresh Company, most of which seem to come and go (see Patchouli Pure, Galbanum Patchouli, Tobacco Flower, Tobacco Caramel, Violet Moss, etc.). As with the Guerlain Acqua Allegoria series, the brand’s philosophy seems to be survival of the fittest. However, if its allegedly masculine counterpart is any indication, Cannabis Rose should be available for a while.


Cannabis Rose shares with its “brother” Cannabis Santal a certain sandiness or grittiness, a quality as difficult to articulate as it is to get your nose around. The clarity of the rose remains throughout, though it roots around in dirtier terrain at various stages, showing itself off in different ways.
Neither sibling has the bright synthetic cheer of Sake and the other Fresh old reliables, that curious sense of arid pungency now synonymous with the packaging, a Barbie doll’s dream of just-washed, lotion-slathered skin. The notes are listed by Fresh as Bulgarian Rose, pomegranate flower, Italian bergamot, jasmine, chocolate, white musk, patchouli, and oolong tea leaves. The chocolate in Cannabis Rose is negligible, something the marketers came up with to get you in the right frame of mind. Probably what they mean is that something here is vaguely gourmand, and chocolate is an easy, evocative reference point, like vanilla but costlier, or naughtier.
The overriding accents are musk and patchouli, which cancel each other out just enough to support the rose rather than upstage it. They probably make the difference between, say, Fresh Cannabis Rose and Fresh Fig-Apricot. Whatever the difference, Cannabis Rose and Cannabis Santal remain consistent with the overall Fresh project, possessing the requisite foundational properties which each Fresh scent is scrupulously edited toward, whatever those might be. Cannabis Rose is nice on its own: a complex but uncluttered soliflor rose. It also layers well, if you’re so inclined. The same qualities which make it behave so well on the skin endow it with the capacity to play nicely with others, lending just the right amount of rose to perk up the same old oriental or chypre.
Fresh Cannabis Rose was developed by perfumer Jerome Epinette and released several months ago. As with Cannabis Santal, for which this is a sort of flanker, the name is meant to suggest the waft of the dreaded ganja leaf. While evoking marijuana is bound to make this rose respectably provocative to the right bunch, lending the whole proposition a frisson of civil disobedience, you don’t have to be a smoker to know this smells nothing like weed, in or out of the pipe. Calling it cannabis is crying wolf in a way, building expectations which ultimately remain frustrated, and such misguided marketing might just distract from the fragrance’s real strengths.
The fragrance comes in EDP and lasts well. You can buy it at Sephora in a 1 oz. gift set along with lotion and shower gel, both nice, or in 100 ml. The gift set is $45.00. The bottle sold separately is 75.
Posted by Brian at 8/10/2008 07:20:00 PM

Thank you for this article. I have a friend that will be very interest in buying these type of fragrances so I will forward your blog to her.
Besides, I love your blog, interesting insights, critics, pix.
keep the good work, I enjoy it very much!
Simone from Brazil.

This article is riddled with lifted passages from others, in particular, http://perfumecritic.com/2009/12/23/fragrance-review-fresh-cannabis-rose-2008/
Perhaps you should cite your sources?
Bad blogger form to plagiarize others....

Apologies! I just realized you are one of the writers behind the Perfume Critic site and take back my above comment.
sorry - nice job!