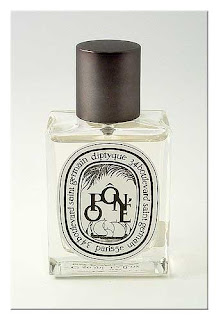 Disclaimer: I’m a lover of many Diptyque perfumes; Tam Dao, Oyedo, L’Ombre dans L’eau, and Philosykos are among my favorites. Diptyque launched Opôné in 2001. I never investigated it until recently and think it might be because there are several Diptyque fragrances that begin with the letter “O” and I just sort of missed it. Had I known Opôné was a rose & saffron scent I would have sampled it many years ago!

Opôné is what I wish Juliette Has A Gun, Lady Vengeance had been. Opôné is rose, saffron and soft woody spices. I’ve noticed Opôné is often called a vampy rose fragrance but I don’t think it’s vampy, it’s really quite tame to my nose. It reminds me of a woody rose potpourri and I mean this in a good way. Some say Opôné is dark and earthy, but it’s definitely not earthy like L’Artisan Voleur de Rose, and nowhere near as edgy as Strange Invisible Perfumes Black Rosette. Opôné is an easily wearable rose/spice fragrance. The overall effect of Opôné is an equal blending of rose and saffron/spices ~ the rose doesn’t stick out more than the spices and vice versa (so don’t expect this to smell mostly like a rose fragrance sprinkled with a little saffron). Like most Diptyque fragrances Opôné doesn’t evolve much from the initial application. This is good, I suppose, because you’ll know right away whether you like it. I really like Opôné, it’s dry, rosy and spicy and while not edgy, it’s unusual and interesting enough to keep me smelling my wrists all day. I have my very own bottle of Opôné now and will definitely wear it often.

Its' a nice review..... the perfume must also be great.