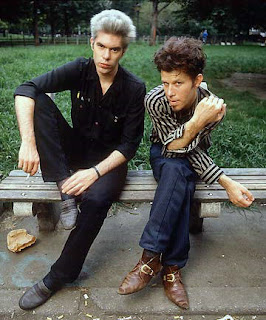 Seeing this picture when I was in high school made me want to dye my hair gray. It also made me want to smoke. It definitely validated my penchant for Goodwill clothing, and Tom Waits' posture even made me a little less defensive: obviously, you could be a little feminine and still perfectly masculine, too.

Neither would immediately strike you as a dandy, yet with their offbeat, even Maverick sensibilities, their highly individual styles and points of view, Jim and Tom represented an alternative version of the dandy ethos particular to the late eighties and nineties, something you might call Grunge Dandy, turning the rarefied concept of dandyism on its head the way goth culture had.

I like to think both would wear something retro and egalitarian. Before putting his shirt on in the morning (or let's face it, the early afternoon), Tom might take the large white bottle of Tabac and splash it into his hands, patting his arms and chest, paying special attention to his throat. All day, the sickly sweet aroma might waft up from his open collar, flavoring his cigarette smoke, which would float about him in great lazy circles. The leather of his shoes would waft up to meet this half way. Jim would apply Old Spice in much the same manner, emitting a worn-in fragrance of smoky cedar, cinnamon and cloves, electrified by aldehydes and the cologne's signature everything but the kitchen sink approach to construction. Both would smell like a million bucks by way of a parallel universe.
Posted by Brian at 8/10/2008 12:11:00 AM