My reaction to this cologne is unreasonable and indescribable, and for a long time I’ve avoided writing about it because its effect on me isn’t something a simple recital of its notes or an intellectual dissection of its dry down could convey. Since buying it, I’ve acquired many more fragrances. I won’t bore you or embarrass myself by saying just how many. Declaration Essence has been pushed to the back of the cabinet. The bottle is unwieldy and though I could easily replace it I resist using it for fear of running out. I don’t ever want to be without Declaration Essence, so I never use it. This is the logic of an obsessive, and explains why many old women have closets full of dresses and hats and coats which have never been removed from the manufacturer’s packaging, and china which is saved for a dinner which is never served.

This weekend, I traveled to rural Arkansas to visit some family. I packed efficiently (one and a half pair of underwear for each day, two t-shirts, soap, shampoo, laptop, books) until it came time to perfume. Obviously, I’ve travelled before, but almost never to a place where I can’t shop for perfume. When I don’t bring anything, it’s usually because I know I’ll need the room for purchases I’ve made while away. I rarely have to think about how much sniffing I’ll need or want to do. Would one bottle for each day be enough? Or two? I had no idea. On any given day I sit down after work with at least ten bottles and alternate holding one or the other under my nose like Frank Booth inhaling from his oxygen tank in Blue Velvet. M-M-M-M-Mommy! How could I possibly bring thirty bottles of perfume to Arkansas? 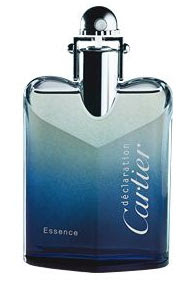 I decided this was a singular opportunity to appreciate the merits of a small handful. Smelling ten at a time, you very seldom get the true aromatic properties of any individual scent. Like cable TV, there’s so much to choose from. Declaration Essence seemed an ideal candidate for this special occasion, so along with Chanel Antaeus, Santa Maria Novella Iris, Washington Tremlett Royals Heroes 1805, and a busted-up bottle of Cuir de Russie, I packed it for the trip.

The country proved an ideal setting for appraising this cologne. I knew I loved it but had forgotten with what kind of passion. When I first smelled Declaration, at Sephora, I was impressed but underwhelmed. From the notes, it seemed like something I would be into. Anything with cardamom seemed a sure fire winner to me. But the choice was between that and Terre D’Hermes, and the latter won out. Months later, when I was in Portland, I wandered into Nordstroms while my friend had her nails done. A saleslady at the mens fragrance counter, after trying to push some feminine on me as a gift for the woman in my life (I AM the woman in my life, I want to scream at these people) she pointed out Declaration Essence to me. I didn’t realize it was a flanker at first and wasn’t interested. It was only because I decided to give the Declaration I remembered from Sephora a second smell that I allowed her to spritz my wrist with Essence. She sprayed amply, drenching my skin, and when I smelled it, I had the kind of intense reaction most of us hope for when we pick up the next bottle. The fact such a response happens so infrequently is one of the things which keeps me looking.

Arkansas was so quiet, and my access to other perfumes so circumscribed this weekend, that I focused intently on Declaration Essence, its smoky nuttiness, an artful blend of woods and spice. The projection is respectable. The longevity is decent enough for an EDT. Many people say that in order for them to tolerate anything less than exemplary persistence, the price must be reasonable and the fragrance exceptional. Essence is both. For what it’s worth, the notes are generally agreed to be bergamot, orange, cedar, birch, oakmoss, cardamom, vetiver, rosewood, and moss. Some insist on the presence of cistus and amber. Chocolate, even. It’s difficult for me to smell any of these things individually, though seeing them delineated on paper I imagine I can, if only fleetingly. Declaration Essence is so well blended, and so wonderfully fragrant, that it hardly matters. Anything that distracts me from the smell itself is banished from my thoughts. Try as I might I can’t break down DE. It isn’t a cerebral scent, even into the extended dry down, a point where your critical faculties start to again intercede with many fragrances. Looking out my mother’s windows, every one of which opens onto a view of Arkansas’ dry green summer landscapes, was a perfect visual counterpart to the smell of DE wafting up from my wrists. There’s something equally inexplicable about those views, equally difficult to describe. Being in my mother’s house always means talking a lot or hearing a lot about my grandmother. It occurred to me that she probably would have liked DE for its Maverick character, having possessed more than a little of that herself.
Posted by Brian at 8/04/2008 06:50:00 PM

Brian! I stumbled upon this review after Googling "Cartier Essence" and, once again, I'm amazed at just how perfectly you're able to nail that emotional reaction a particular scent can sometimes trigger.

I like the original Declaration quite a bit and so was curious about the Declaration flankers, but now I'm in flat-out investigative mode.

Thanks for another terrific piece of writing. I spent 3 1/2 years in Arkansas while I was in college -- your description of the dry summer landscape brought that all slamming right back into my brain.