Bond No 9 Lexington Avenue: A Review 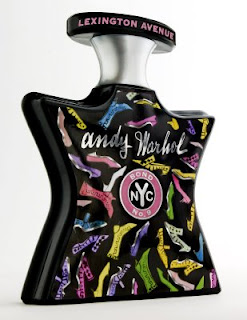 is the third fragrance created by Bond No 9 in collaboration with the Andy Warhol Foundation.

Judging by the first two and now the third in this series I’m not so sure Andy Warhol himself would like any of the fragrances that Bond No 9 has created in his namesake. I’m just guessing this because he was buried with a bottle of Estee Lauder Beautiful. If Andy Warhol loved Beautiful so much perhaps his tastes would lean towards Broadway Nite or Chelsea Flowers but I digress. The second fragrance in this series, Silver Factory, is one of my favorite Bond’s, so I was eager to try .
is so named because Andy Warhol lived in several apartments on , specifically in Murray Hill, in the early 1950’s. At this time Mr. Warhol was working as an illustrator at a shoe company called I. Miller. Hence the design on the bottle of seductive heels and boots. For lovers of perfume and shoes, the bottle alone might be something worth owning, it’s rather whimsical and charming.
Bond describes this scent as a floral woody chypre. Claude Dir is the perfumer and the list of notes are as follows: blue cypress, fennel, cardamom, pink peony, iris, crème brûlée, pimento berry, patchouli and sandalwood.
Yes, I too, was a bit perplexed by the list of notes. I couldn’t imagine what it would smell like. Especially with the crème brûlée note, I worried it would be a sickly sweet confection.
opens rather softly. I ended up applying quite a lot because I really wanted to be able to smell it ‘clearly.’ Turns out, it starts off quietly but in a matter of 10 minutes it began to warm up on my skin and become much more obvious. After about 30 minutes, I wasn’t completely able to describe the fragrance yet, and knew I needed to wait at least 3-4 hours to form an opinion but I already knew I LOVED it.
Overall it *is* a floral woody chypre with a twist. The cypress, fennel and cardamom are most noticeable in the beginning, with a slight “anise / licorice” scent and while it is a lovely start, this all morphs into the final gorgeously blended perfume which I can only describe as slightly reminiscent of Chinatown but much much better. Once dried down the sandalwood is apparent and it’s just altogether smooooooth. I think the crème brûlée note serves to add a creamy deliciousness, not overly sweet and not in the gourmand category in the least. This is a floral woody chypre just peeking through a keyhole into the gourmand category. I also get an overall impression of the spicy notes, the cypress, fennel, cardamom and pepper being draped over an evergreen forest. It’s a very calm, comforting and peaceful aroma. I imagine it being an absolute joy to wear in the crisp fall weather and most definitely in the winter. There is a ‘sweetness’ to , it is not a very dry spicy scent, but I would think that anyone who likes and Nuits de Noho, really ought to try . I’m going out on a limb here, but in a way, reminds me of a very subdued, sophisticated, always decadent Aunt to Angel by Thierry Mugler. I am most definitely ordering myself a bottle and am so looking forward to the fall when I can start wearing this gorgeous fragrance.
Lasting power is average, on me, about 4-5 hours.
Sillage (aka scent trail) is small to medium, which means a person standing right next to you can probably smell it, but it doesn’t project more than it ought to.
Posted by Abigail at 8/04/2008 06:33:00 PM