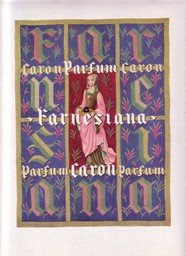 Mimosa is among my top five favorite notes. Mimosa is in my beloved Amarige by Givenchy (and FYI the mimosa is much more apparent and breathtaking in the 2007 Harvest Edition of Amarige). One of my favorite L’Artisan perfumes is Mimosa Pour Moi. Unbelievably Mimosa Pour Moi lasts for a few hours on my skin (yay, for L’Artisan!) and it’s a wonderfully rendered greenish mimosa soliflore. Jean-Paul Guerlain's Champs-Elysees is also meant to be based on a mimosa accord. Caron’s Farnesiana is nothing like Amarige, Mimosa Pour Moi or Champs-Elysees but I mention them so you can make comparisons amongst mimosa-focused fragrances.

Farnesiana was recreated by Michel Morsetti from Ernest Daltroff’s notes after his death in 1941 and released in 1947. The name is taken from the Latin name for cassie, Acacia Farnesiana, as well as the garden in the Roman palace of Farnese which is the inspiration for Farnesiana.

Farnesiana’s initial burst is mimosa, cassie and heliotrope. Heliotrope usually smells like play-doh to me and it also does in Farnesiana but it’s a lighter, fluffier and gorgeously gourmand heliotrope which causes me to envision marzipan and almond milk. I’m in awe of how groundbreaking Farnesiana must have been in 1947. To me, it’s a floral gourmand, wayyyy ahead of it’s time, and simply heavenly. If you sniff really hard, with the intent of detecting the other notes, you can smell a powdery violet and perhaps other florals. Overall Farnesiana is a sweet (but not overly sweet in the least), floral, powdery gourmand masterpiece. When I use the term gourmand please don’t think of sickly sweet dessert fragrances from Comptoir Sud. In my mind, the gourmand category has sadly been “dumbed down” to the point of only being associated with sweet cupcakes, chocolate, frosting, and bakery confections. The gourmand category has unfortunately received a bad rap lately but if there were more gourmands created like Farnesiana, well, I think this reputation could easily reverse.

Farnesiana is drop-dead gorgeous. It’s so soothing and comforting I wish I could spray my bed linens with it. Almond is not listed in Farnesiana’s notes but it seems like everyone (myself included) find it to be an almondy-floral-mimosa-powdery nirvana.

I LOVE Amarige from Givenchy! You know that LE harvest from 2007, do you think it differs much from the original?

Hmm, don't think I've tried the Mimosa pour Moi. Might get that L'artisan sample set! And guess what, I already got Montale White Aoud as a wedding gift! What's the odds for that? Anyways hope it sells well in the shop!

Exciting review! Want to check it out!