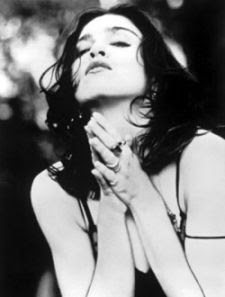 Brian sent me a huge number of decants from his collection that arrived today. I have never smelled any of these fragrances. I opened the package, unwrapped all the vials, then I proceeded to take a nap without smelling a thing. I was utterly overwhelmed.

Once I started sniffing, I began sending him emails with my reactions to each. One interesting point Brian mentioned is that he feels protective towards certain colognes/perfumes and notes. That got me thinking. I, too, feel protective towards a number of fragrances. As I ran down the list I realized that most of them are powerhouse 80’s fragrances from high school. There are only two from the 90’s, zero from the 2000’s and zero from the niche category.
Here’s the list of fragrances that I feel protective towards, and, I suppose you might understand why:
Perhaps I’m more embarrassed than protective. All five of these perfumes are seriously powerful and shriekingly loud. There are only two that I wear occasionally now, Amarige and Lou Lou, and when I wear these I’m careful to apply lightly. But back in the mid-late 80’s when I was in high school, I cared not for others. I applied Poison and Lou Lou as if they were fleeting body sprays. I sprayed Diva in my locker, in my car, all over my bedroom with wild abandon. My friend Megan wore Estee Lauder’s White Linen in much the same fashion. Nicole bathed in Lou Lou. Becky was scented with Lauren by Ralph Lauren, Melissa was also a Poison girl like me and Lesley liked to wear Laura Ashley No. 1 (which was by far the tamest scent in our group). I shudder to think of what the car smelled like when we drove off together on a Saturday night headed for a destination entirely different from what our parents were told.
Fast forward to the early-mid nineties when I wore Amarige exclusively during college. I’ve never received as many compliments on any other fragrance by a mile. Amarige is sexaaaay and that’s the way it made me feel.
I wore Angel for about 6 months when it first hit the shelves in 1997. I felt like I was the first to wear it. I loved it. It was during this time that I also loved my job. I was traveling the world (Europe, Asia, , you name it) and I was professionally quite happy. Once an Angel-laden-smog developed around all major cities due to the number of people wearing it I had to stop. It was just too trendy. Now it seems like everyone hates it. I don’t hate Angel at all, I rather like it, but I think fifty years of olfactory distance need to pass before anyone can truly appreciate it now.
So it seems that these fragrances make me nostalgic. I’m protective of them because they hold the memories of good times in my life. I don’t think I’ll ever objectively smell the horrific things that others smell in these fragrances because I wore them, I loved them, and they’re tightly intertwined with happy memories.
PS: Happy Birthday, Madonna! Madge is 50. I can’t believe it.
Posted by Abigail at 8/16/2008 09:53:00 PM

I think it's a memory thing, too.
I never wore Amirage myself, but one of my sisters did (therefore twas hers, and I never dared trespass!), so I quite like to smell it. Still don't own any, though.
Poison - can't be doing with it. Sorry! Why? Well, go back in time to a packed Tube carriage (and it can get over 100 degrees down there, with no a/c), full of office girls who've drenched themselves in Poison, or Opium, or Dune... you get the picture. Then do that twice every working day for years. Those Japanese guys who put Sarin in the subway? Amateurs.

Angel, same problem. I did love it at first, though.

I still like Diva, though sadly my old bottle has turned. I used to enjoy LouLou, too. But I sprayed it in a shop the other day and I think they've changed it. It was not at all the same scent I remember. A pity, as it was on sale!

Tania, I know, I know, I think I'm rather embarrassed about these big loud 80's scents! Your description of being stuck on the tube with no AC nearly gave me a migraine at the thought :-D
I promise you, I'm not one of those offenders now.
However, after writing this piece I've been wearing Amarige (the 2007 Harvest Edition which is lighter) for 2 days...

it's not that bad on the tube nowadays, as there aren't so many sillage monsters around! But I did used to get migraines from them back in the day. The only time that has happened in the last few years was from JLo Glow. I think that girl must have swum in a vat of it before her commute...

The scents are fine, in moderation. I think Poison is a masterpiece, for instance. It's not one I wear, but I can admire it from afar - in small doses. ;-)
And I used to have a friend who wore Paloma Picasso for night, and Montana for day, both 'monsters'. I loved them both on her. Like most of the big 'uns, they're just not right for me.

I used to wear Giorgio, though, and I still like it, in a nostalgic way. It's funny, that was the scent which got restaurants banning perfumed customers - but I never had a problem with it at all.

I was on vacay, and missed this. But I appreciate it.

Amarige = similar for me. I actually discovered it recently, when I began the perfume journey a year and a half ago. But in the beginning, I was sniffing wantonly, without tracking down things I had read about, and that one stopped me and made me smell again. So did Poeme. Amarige said "uff da!" and Poeme said "smile (you have no choice)," both in positive but present ways.

I am still hunting for my scent from the '80's, KL by Karl Lagerfeld. I have a feeling if I could ever nab a parfum, I might be happy, even it is just in a "thanks for the memories" kind of way.

I have to say that i too wore Poison AND Lou Lou with wild abandon! Altho I thought LuLu was spelled differently back then and was made by Betsey Johnson after her daughter Lulu. Now I find it by Cacherel-did they buy it or am i Crazy?

Tanya,
It's always been Lou Lou by Cacharel. Maybe you are thinking of a different fragrance? Because I think Betsey Johnson came much later. Lou Lou launched in 1987 I believe. I still wear it. Not so much Poison or Amarige but Lou Lou I wear fairly frequently :)