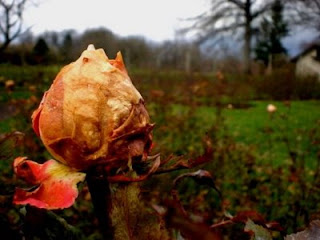 Ungaro III and Czech and Speake No. 88 get all the love when it comes to arguably goth rose fragrances, yet Zombi openly references associations those two only politely hint at--the sleepless, the undead, New Orleans plantation homes with floor to ceiling windows and moonlight coming through. That isn’t to say Zombi isn’t a perfectly presentable soliflor. But it can easily be admired on parallel, even mutually exclusive, planes: as a nice, quiet rose in a porcelain dish, and something the undead would bring you, clenched between what’s left of his teeth.

Black Phoenix Alchemy Lab is owned by Elizabeth Moriarty Barrial and Brian Constantine. The company is based in Los Angeles. The perfume sold by BPAL is blended by hand, using natural ingredients such as essential oils and absolutes. Some of the oils contain honey and/or beeswax. Otherwise, the products are vegan friendly. Though you’ll probably see it classified as a dirty rose, Zombi is much more than that. Fresh Cannabis Rose is “dirty” in the sense this term usually means—-dirty as a sort of condition, the opposite of fresh or dewy, maybe. Zombi is more conceptual, aspiring to a very specific if inarticulate realm of associations.

The name is a giveaway. The scent immediately recalls moist, upturned soil, the faint whiff of wet grass and trodden Johnny jump-ups. It's one of the more fascinating, evocative BPAL fragrances I've tried. “Our scents run the aesthetic gamut of magickal, pagan and mythological blends, Renaissance, Medieval and Victorian formulas, and horror/Gothic-themed scents,” say the owners, who, talking like this, might as well call themselves Dr. Frankenstein. BPAL has many oils. Possibly, too many. The site lists upwards of 100. Dragon’s Blood, Dragon’s Tears, Danube, The Hanging Garden. Zombi can be found under the section titled Ars Moriendim, wich translates into “The Art of Dying” and refers to a pair of so-named texts from about 1415 and 1450, products of the Black Death, which describe how to end well.

Other series of oils are Sin and Salvation, Mad Tea Party, Wanderlust, and Rappaccini’s Garden. The Stardust Collection is based on the characters, locations, ideas, and dreams found within the pages of Neil Gaiman's novel of the same name. You see where this is going. It’s hard to take Black Phoenix too seriously, which makes their obvious sense of humor about themselves a fortuitous thing.

Zombi is a fragrance oil and comes in a standard apothecary screw top bottle. All BPAL oils are sold in 5 ml decants. Zombi is $15.00. The notes are listed as dried roses, rose leaf, Spanish moss, oakmoss and deep brown earth.

For gothy roses you forgot L'Artisan Parfumeur's Voleur de roses, which I think is a superior mix of roses and earth than Zombi, less potpourri-like (but then I'm not a rose fan and find a lot of expensive and niche rose scents potpourri-like too...)

Yeah I consciously disregard Voleur. It's a gorgeous fragrance, the part that lasts 15 minutes. The rest, the part that lasts about forty, is pretty much patchouli to my nose. No. 88 and Ungaro III seem to have more of a goth reputation than Voleur but I could be reading the wrong places. I'm surprised you found Zombi potpourri-like. It literally smells like moist soil--again, to me. There's nothing particularly spicy about it. But I wore Diptyque's L'Autre the other night, which smelled of Pledge to me, and someone insisted I scrub it. He was the third person to say it smelled like B.O.

Erm...how do you place SIP Black Rosette? Not zombie--no dark earth--but that is some funky opening. Potential goth?

You know, I've never smelled it, and when I visited Barney's I don't believe I saw it; I never heard of it until a few days ago. But it sounds great. You like it? So what's the opening?

I agree about the moist soil part of Zombi, it's very lifelike. I should have specified that it's the rose note I find potpourri-like, like dried rose petals scattered on moist soil rather than as living roses growing in it. But then I'm very picky with rose scents and I've realised that some live roses actually do smell "dried" and "potpourri-like" to my nose...

by the way, I believe you've smelled both new and old Shocking, correct? I own what imagine to be a newer version and wonder how it rates compared to the original. Are they vastly different? How and where do they diverge? I know you said the difference is largely the rose note in the more recent formulation. Can you go into any more specific comparison testing? I'm just curious.