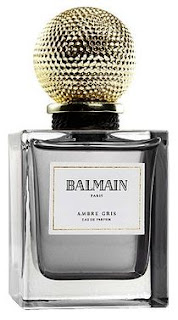 Balmain Ambre Gris recently launched in March 2008. The nose behind the fragrance is Guillaume Flavigny. The notes are described as: myrrh, cinnamon, pink pepper, immortal flower, benzoin, tuberose and ambergris.

I know, I know…Balmain must have been required by law to include pink pepper since it’s the trendy note of 2007-08. I was amused by “immortal flower” since I’ve never heard of it before and it sounds imaginary to me. A quick google search didn’t shed any light on immortal flower so I’m guessing it’s a fantasy note.
The perfume itself is very sweet. It’s described by Balmain as a “woodsy-animalic-oriental” and with the mention of ambergris I was not expecting something so über-sweet. When I read the list of notes I anticipated something along the lines of Hermes Eau des Merveilles. Ambre Gris doesn’t bear any resemblance to Eau des Merveilles to me. I definitely smell a rubbery tuberose in Ambre Gris along with soft spices like cinnamon & myrrh. I would categorize Ambre Gris as closer to a gourmand rather than a woodsy-oriental. There might be some woody notes in there but you really have to go sniffing for them. Overall, what I smell is a “sweet, rubbery, chocolately tuberose with soft spices.” This is not so say Ambre Gris isn’t a nice fragrance. Even though it’s sweet, it has its merits. I think I was merely put off by Balmain’s description of the fragrance, which just isn’t accurate to me. If I had been prepared for what I smelled I might have liked it more.
It strikes me as the sort of fragrance that someone who likes Lolita Lempicka (though not fruity like LL), Trouble by Boucheron or Dior’s Hypnotic Poison might like. I think Balmain Ambre Gris is nice, especially if you are expecting a sweet floral-gourmand and not a “woodsy-animalic-oriental.”
The bottle is charming in person – I’d call it handsome. I worried the top might look like a golf ball or perhaps Epcot center but sitting atop the classy cube-shaped bottle it simply works.
I just bought Balmain Ambre Gris for $24.95 from www.parfum1.com. At this price, I’m perfectly happy with the fragrance and I’ll surely give it a go during the cooler months.
Lasting power: Excellent ~ 5-6 hours.
Sillage: Medium ~ if you’re a heavy spritzer others will smell it.
PS: I sprayed this on my friend and it smells much more woodsy on him. It still smells entirely sweet on me but I can smell the woodsy quality along with salt on him. Huh....
Posted by Abigail at 8/12/2008 08:53:00 PM

'Immortal flower' is Immortelle, a plant growing in the dunes near the beach, known for its survival strenght and the way it never seems to die. It is an important component in fragrances, notably in 'Sables' by Annick Goutal, which Goutal made as a declaration of love for her husband. 'Sables' is the french word for 'sands' and it refers to the beaches were immortelle grows. It's scent reminds me of maple syrup.

I joined the charge to buy this unsniffed from parfum1, and I feel really similarly about it. I dislike sweet and gourmand fragrances, but it's also so lovely, like one of my favorite things--salted caramel--that I'm willing to reserve judgment until I can try it in cooler weather. So that'll be January, the way things are going in Austin....
Thannks for the review!