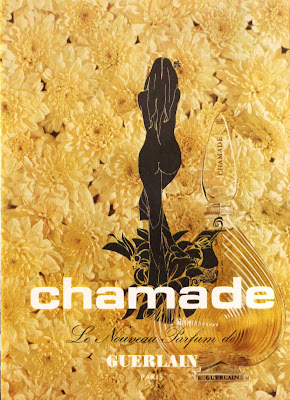 Chamade was virtually the first thing I ever smelled at the Guerlain counter, though not the first thing I saw. It's possible to find Guerlain's greatest hits here at the mall, but don't expect anyone to pull them out and show you without being asked. When you do ask, the saleswomen do a double take, either because they've never noticed them before or have but can't believe someone's looking for them. Pink and purple, L'Instant and (My) Insolence sit right up front, bracketing Hilary Swank's toothsome smile. Samsara and Shalimar are stored below, behind glass, very old fashioned in their staid red and blue rows. Chamade is behind the counter. Its gold box nearly disappears into the wall, alongside Mitsouko, Jardins de Bagatelle, and sometimes, if you're lucky, Jicky, all similarly packaged. You can forget Nahema, and the masculines don't even rate an appearance. Where Champs-Elysees is placed depends on the whim of whoever happens to be bored on the clock that day, and how old she is. Its pink and gold markings straddle the fence of old and new. Of all the Guerlain names, Chamade was the most intriguing to me.

I've since purchased L'Heure Bleue, Mitsouko, Nahema, Coriolan, Vetiver, Shalimar, Habit Rouge, and Samsara, in no particular order, but only finally picked up Chamade this afternoon. Why I saved the best for last is something of a mystery to me. Something about Chamade convinced me I wouldn't be able to pull it off; whether the heady impression of narcissus or the overall potency of the fragrance, I don't know. At the time I first smelled Chamade it did seem overwhelmingly, inarguably feminine to me, of no particular age but of very definitively gendered. What gave? Mitsouko is arguably masculine by conventional standards, but L'Heure Bleue? Samsara isn't exactly butch either. I think my tastes keep expanding, and my nerve keeps building. I might not have worn Chanel No. 19 a year, or even a month, ago. I might have said, like my friend when he smelled Cannabis Rose on me, "Hmm, too girly."

Something's changed; probably, mostly my mind. Outlook is everything. The Perfume Guide helped. The idea of a Best Feminines for Men list, like everything else Turin does, isn't simply about itself, about the idea of better and best. It's about expanding your view. Once you've allowed that Mitsouko might be worn by a man, you inevitably question why you ever thought it shouldn't have been. What exactly about Mitsouko, and, by extension, any other fragrance, makes it masculine or feminine? Very little, it gradually seemed to me. That the Perfume Guide was written by a male/female duo who happened to be romantically partnered makes that process of re-evaluation even more interesting.

What I noticed right off the bat this time, picking up Chamade, is that, yes, there are florals. But once you process that, and move on, you smell everything else. Chamade is slightly oily, as Turin praised and others have complained. Inside that, or beyond it, you smell all kinds of things. Exactly what I'll leave to your own discovery. It's a favorite of mine and I enjoy the hard won right not to defend the position with detailed analysis. I love it more than anything because it waited patiently for me and, once I came around, held nothing back. It's as complicated as it ever was, and I'm a little less simple-minded.
Posted by Brian at 7/09/2008 06:52:00 PM

Hi, Brian and Abigail. I have been reading your blog regularly since I came across it via Perfume Bloggers. I think the writing quality and content is excellent (and much less pretentious than many!) and I can't understand why you aren't geting lots of comments - not enough exposure yet? I don't comment much anywhere, about anything, but it doesn't mean I'm not enjoying it a lot, so don't be discouraged (if, indeed, you are!) I particularly loved the doggy baghead.
I used to wear Chamade when I was much younger, because of its connections with the romantic Sagan novel as much as anything, and haven't yet re-explored it since I came to perfumania a few months ago. I will, though, all in good time....

Hey, Liz, Thanks so much! Brian and I are having a lot of fun with the blog, as you might be able to tell! We're receiving a lot of visits on our hit counter but it's true that we haven't received many comments. Hopefully in time that will happen. It is more fun when readers comment and become engaged.
We will keep on writing and hope you'll find more enjoyment in the future!
PS: The doggy baghead is a riot. Brian's got a great sense of humor :-)

I love the crisp true hyacinth topnote in Chamade but I'm less fond of what smells to me like a warm, powdery carnation-based vintage floral after that. I'm thinking of using it as a roomspray or something to try to preserve the topnotes longer than on skin...

Hi Solander. You know, it's weird. Both L'Heure Bleu and Chamade are intensely mercurial to my nose. Just when I think L'Heure smells like violets, I smell it again, say a month later, and I'm convinced I was all wrong. They're both shape-shifters. I suppose I do smell carnation in Chamade, if I think back, but it sometimes smells like various other things I can't put my finger on. That bottom area is decidedly peppery in some way, and try as I might I can't find the galbanum. After I spend time with smells and their conditioned associations wear off, I start to smell them on very different terms. It's impossible for me to smell either of these anymore and think "old lady". It's interesting what both of these fragrances do gender-wise, and figuring out how to screw around with those signifiers is a lot of fun. What really makes a perfume womanly as opposed to manly, or is this all purely perception? What's the middle ground there between what we bring to a perfume and what it brings to us? Regardless, that's one expensive room spray--at least in the states. Caltha on basenotes feels almost exactly about Chamade as you do--or is that you?

L'Heure BLEUE. I always forget the extra 'e'. I'm a lazy American. It's the kind of name I wish was over before I've finished typing it.