Dandy of the Day: Tilda Swinton 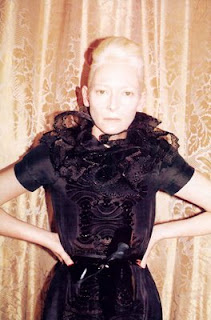 Actors are vain, needy creatures. Do they look okay? Are you sure? Should they do it again? They could do it louder. They could do it with more enthusiasm. They could do it as if they were a woman who's just lost her dog. Do you like them? Do you really like them? Most actors need to know. They need to be at the white hot burning center of your attention. If they can't be, they might die. We all might die. What actors do is of world importance: more important than war, famine, sickness, crime. Actors cure all those things just by speaking out--about their views, their experiences, their favorite colors. They want you to know: they're special. They want you to know you're special, so you can thank them for pointing it out to you. It goes without saying: without them, you wouldn't be special at all. It goes without saying but they're saying it anyway. If a tree falls in the woods and no one is there, who hears it, unless the actor is present and can then report it through various actor-y techniques. It's impossible to watch most actors on screen without wondering how many people they've thrown hairbrushes at, but there are exceptions among these exceptional beings, and one of those exceptional exceptions would seem to be Tilda Swinton. She doesn't play lesbian serial killers, true, but packing on pounds is a little excessive, if you ask her, just to show you aren't afraid of looking homely, especially when it's vital to you that everyone knows you're truly not. She shows up on the red carpet in Issey Miyake, looking like origami. She has no shame. She'll play man, woman, whatever. She leaves you to figure it out. She works with small directors, odd little films, and big budget headliners, even blockbusters. She speaks out without patting herself on the back. She doesn't pretend to be self-deprecating. In her personal life, which is mostly, blessedly, personal, she's her own person. Still devoted to the father of her ten year-old twins, she is also with actor/artist Sandro Kopp. Don't ask if you don't want to know; otherwise, she'll tell you. It's not like they're robbing banks or something. They're all together, though not in that Bruce Willis, Demi Moore, Ashton Kucher way. Swinton is our dandy of the day for this unfussy candor and many other reasons, and judging by her fashion forwardness, which is practically futuristic, we suspect she would wear something niche. We suggest Iris Silver Mist or Tubereuse Criminelle, if she doesn't know about them already (if she does, she likely heard of them long before we did). Both are nearly avant-garde in their strange interplay of pretty and potent, angular and full-bodied, dirty and petite. Some would encourage you to wait an hour or two after application before entering out into the world. Use caution with these two, they'd say. Tilda would say those first two hours are the very best.
Posted by Brian at 7/06/2008 11:59:00 AM

Tilda! She's amazing. I loved her in Orlando. I remember she exhibited herself in a glass box at one time, sleeping for days, in some artist's conceptual art piece. She is so unreal-ly white! Like a marble statue, like a fairy tale heroine...

Lovely writing. I hope you send her a link to the post somehow, I think she would appreciate it.