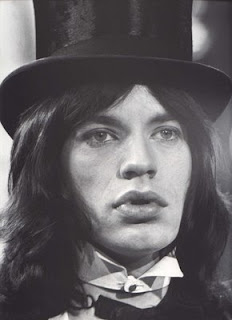 Well, no, certainly not now--but for a time, some time ago, briefly, during the sixties. When you look at Jagger these days, even in older pictures, it's difficult to see what he was; just as, when you smell L'Heure Bleue, it's hard to ascertain what exactly its impact would have been around the time it was released. You're told it must have been a phenomenal aberration in 1912, truly unusual, yet the overriding association, now, is a fussy elderly woman with a pink suit and a hair rinse to match, such that you don't really smell what the fragrance is, only what it recalls. In the sixties, Jagger specialized in a subversive renovation of the dandy aesthetic. Yes to ruffled shirts and Edwardian jackets. Yes to stovepipe pants and pointed shoes. Yes to long hair, yes to make-up on men, yes to painting vintage interiors with psychedelic colors, cultivated androgyny, easy virtue, yes all around. For many people, tearing down the boundaries of an established conservatism wasn't just a kick but a serious form of civil disobedience. A man can look like many things today but wearing make-up, as Jagger did in Performance, is still asking for it. Dancing as if a woman has possessed you and desperately wants out, as Jagger did on stage (see Gimme Shelter), is flaunting your perversion in a way that even gay men and maybe even women would find offensive today, because it frightens the horses, and gives the wrong idea, and no one will get anything, certainly not equal rights, if they don't work overtime to act like everyone else. Just say no to yes, in other words. Jagger hasn't helped things. On a good day, he looks like the establishment he once set about to overturn. On a bad day, he looks...rode hard and put up wet. Our dandy of the day is a snapshot from the near past. Try to see it clearly, without the goggles of conditioned disdain. In this photo, Jagger might be wearing Loulou, by Cacharel, the bottle of which, like the juice, recalls a practically ancient deco excess of style and luxury, beauty for beauty's sake. All yes, all the time.
Posted by Brian at 7/02/2008 11:19:00 PM

Great post. I think of Brian Jones, too. All those early sixties Barnaby Street dandies -- really makes me smile.

Hi Lucy. Thanks for responding. I LOVE Brian Jones. Everybody says he was the true dandy; that if he hadn't gone Mick never could have been where he has. A novel which fictionalizes Jones came out recently; it's called Sway. I have it but haven't read it yet. Jagger was really great in Performance, but everyone says he was just playing himself, and I got the feeling he was playing Jones. There are some great Brian Jones slide-shows on youtube.