Dandy of the Day: Sarah Silverman 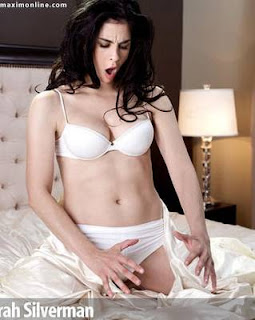 Sarah Silverman is to satire what Julia Child is to cooking.

Sarah Kate Silverman is an American Emmy-Award nominated comedian, writer, singer, guitarist and actress.
Sarah is a gifted satirist who relishes exposing controversial societal issues such as racism, sexism, religion and homophobia. She’s so good at satire that I think there’s a whole segment of people that just don’t get her; they think she’s a jerk. Sarah is especially good at potty humor and nearly anything that one might consider uncouth. While Sarah is quite pretty, even beautiful, she doesn’t seem to emphasize this, or capitalize on it at all; she prefers to wear jeans, sneakers, tee shirts and her hair in a ponytail most of the time. This casual, carefree appearance didn’t stop Maxim from putting her at #29 in their 100 Hottest Women of 2007 issue. Sarah was even on the cover of Maxim (and, of course, she didn’t allow the photos in Maxim to straight-jacket her into any sort of sultry sex pot imagery, her satirical comedic charm was captured instead).
Sarah Silverman has openly admitted to battling depression and thanking Zoloft for her current emotional health. She’s such a funny seemingly outgoing and gregarious person that it’s hard to imagine her depressed, but there are so many people; actors, comediennes & writers in particular who are dealt the depression card.
In my mind, Sarah wears 3 different perfumes for 3 different moods. When she’s working, acting, socializing and “on” I think she wears Comme des Garcons Red Carnation. Red Carnation is hot, spicy, unusual and yet floral and pretty. This is Sarah’s public personae.
When Sarah is at home in her pajamas, writing, meditating and being alone, I think she wears Aqua di Parma Iris Nobile. Iris Nobile allows her to be introspective, to write, to relax and concentrate. 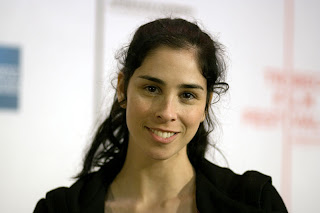 When Sarah is out with family, friends, running errands, going out to dinner or the theatre, she likes to wear Dawn Spencer Hurwitz’ American Beauty. American Beauty is the most beautiful pure red rose. Sarah is, at heart, a person who cares about other people and the world enough to write comedy aimed at breaking cultural stereotypes and helping people see the ugliness of sexism, racism, etc. She is an idealist and she loves the aroma of a pure and innocent red rose.
Posted by Abigail at 7/21/2008 08:17:00 PM