Sharing the Wealth: From My Collection to Yours

Recently, I became an ambassador of good will for some of the perfumes I love. An exclusive boutique here in town, I just discovered, sells Bond No. 9, Fracas, Sisley, and Delrae, the line of fragrances created by Michel Roudnitska, son of Edmund, creator of Diorella, which makes him royalty in certain circles. The store sells Manolo Blahniks and Laboutin, Prada bags, high end jewelry and trinkets catering to a certain kind of fashionably aspirational clientele, the kind of women who shop while their husbands bank or barter. The Roudnitska line hasn’t done too well, and the manager, who’s heard of L’Artisan but not Serge Lutens, is discontinuing it. Bois de Paradis had clearly been the best seller, as there was none left. She had no intention of re-ordering.

Had she ever heard of Annick Goutal—or Montale? No, she cautiously admitted, but she’s interested in branching out with additional niche lines. You could tell this woman is at a crossroads. What to do, as a purveyor of luxury goods, when Sephora becomes your competition? No sense in stocking Paris and Elle if they can be had by a girl in a halter top and flip flops at the mall. You might as well sell Wind Song. Lutens is exactly the kind of thing these ladies would go ape-shit for; those sleek, anorexic bottles, their liquids various shades of wine, honey and grenadine. I’d never heard of the brand when I first saw the Lutens display at the Perfume House in Portland, and the bottles intrigued me with a gravitational pull I still don’t entirely understand.

It’s not that they look exclusive, or even particularly exceptional. Set alongside each other like a monochromatic bank of delicate glass brick, they look 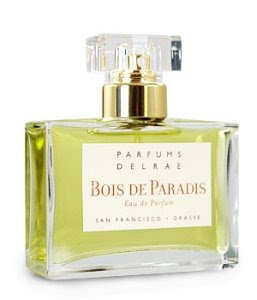 homogeneous, if anything. I suspect the fact that they don’t bother standing out makes them more appealing. They look like something no one has told you about because they haven’t yet noticed them sitting there. In a world of common knowledge, where everyone’s birth date, Social Security number, and bank pin can be found online, where you can track down the girl who spit on you during recess forty years ago simply by punching in a few otherwise random words, a secret is the equivalent of a Mercedes with seat warmers. Then again, Beanie Babies looked utterly unremarkable, and everyone wanted those.

I painted a picture for the manager, careful not to get carried away by my own enthusiasm. I need to think of her, I thought. I should think practically and base my suggestions on what will work. I’ll be helping no one, including myself, if I pimp Montale Aouds on her. They simply won’t sell. And then where will I be? Back to buying blind off the internet, with a scrubber to every keeper. While Fracas might move, would Bandit? I could see Baghari and Visa on the glass shelves with the bright light illuminating them from behind, those marvelous black bottles sitting there like discreet weapons, popping against the white background like flowers set off by aldehydes. I could see L’Artisan lids catching light, shooting it in criss-crossing beams over the ceiling. At the moment, Bond No. 9 arrays itself front and center in the store’s new perfume corner screaming fun, fun, for all a good time. So, yeah, that’s an easy lay. Beside them the Lutens would look uptight, if not totally frigid. Who wants to buy impotence? Considerable strategy would have to be applied. I decided the best bets were L’Artisan and Lutens, ultimately, supplemented by limited selections from Annick Goutal and some of the other niche lines, which meant Heure Exquise and Songes but probably not Sables.

This woman looked at me distrustfully, like most people do when you start making obvious your overwhelmingly unreasonable all-consuming obsession with fragrance. She can see my cabinet at home, I thought irrationally. She can see how it’s overflowing, threatening to take over another compartment, the contents of which will have to be moved to the attic. My family’s heirloom china or whatever it is will be stomped on and broken when I carry the tree up next year but I won’t care because my perfume has a safe place. She sees how I’m humoring myself for the time being by stacking boxes on top of the cabinet, as if there’s still room and I simply haven’t gotten around to putting them away yet. She sees the money I spend on cologne, the strange familiarity I’ve developed with salespeople at the mall’s discount kiosk and Perfumania. She sees me at Marshalls combing through Azzaro and Paul Sebastian boxes looking for a rare find, the second time this week. She sees my sickness writ large all over my face. What the hell does a person who isn’t making or selling cologne need with all that information? I believe she assumed I was in door-to-door sales, the guy who comes to your porch with a briefcase and a needy, familiar smile, refusing to leave until you’ve committed to a white leather bible with your grandmother’s name embossed in gold down the spine.

What I would be happy to do, I explained, is bring you a selection from my own private reserve. It was no newsflash to me that what I really wanted was to sit down with someone who’d never smelled Dzing! and watch her eyes pop, her cheeks blush, and that shock of recognition pass across her features, that feeling you get when you seize the unfamiliar, some little miracle of scent someone’s fit into a bottle. I wanted ever salesgirl on the floor to rush over, not to sell me the fruity banal nothingness of YSL Elle but to find out what the excitement was about over there where something like a meteor seemed to have landed, creating commotion. My mind was already hopping through the carefully stacked boxes in my Butler’s Pantry, which fit together like a puzzle and shift precariously according to my current field of interest. I told her I'd be back next week with a bag of bottles.