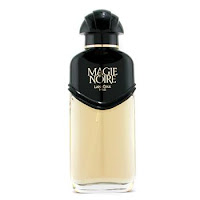 I can spend hours in the Korean-owned fragrance store here in town, going without food, water, sleep, or even contact with the outside world. The place has been a total education for me. Within a short three months I've been able to smell dozens of perfumes I might otherwise only have read about. The owner took over the store from his relatives, who operated the place for years, so a healthy percentage of the inventory dates back to pre-reformulation, meaning that even those I think I'm familiar with have the capacity to surprise me.


The first time I walked in, I spotted the old Montana for men. It has a great, bracing smell, cedar astringency, very nice. Adjacent to it was the newer formulation. The old is boxed in red, the new in blue. There's really no comparison. As often happens with old and new formulations, the two are completely different fragrances. The recently re-released Magie Noire, on sale at Perfumania, is a pale iteration of the original, which the Korean shop has. The original is strange and indolent--barely this side of foul, and wonderful for it. The re-release smells good, but really only indirectly references the original, the way a matchbox car does its source. Imitation of this kind requires crude generalization. Corners get rounded off. Suggestion substitutes for detail. Several of the perfumes the owner has carried haven't been reformulated, they're just hard to find: Issey Miyake's Le Feu D'Issey, Etienne Aigner No. 1, Yohji, K de Krizia. Every time I go in I see something new. One day I looked up and saw two quarter ounce bottles of Bandit pure parfum. The place is a museum, a history lesson, and a candy shop. 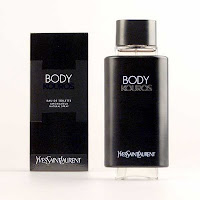 I ask a lot of questions. Who buys what, or does it actually sell at all? I won't bore you with how popular Paris Hilton's perfumes are. Because I'm there often and for significant blocks of time, I witness various shoppers come and go, and what they ask for fascinates me. I've yet to see anyone play. They come in looking for Mariah and that's what they want to see: not something different or even something like it. Recently a girl came in shopping for her boyfriend. He wears that, she said, pointing to Jean Paul Gaultier. This looked promising, until she said he has about ten bottles, all lined up in a row. She wanted to buy him something, but she wasn't sure what. He drives a nice car and he runs three businesses, she said. He dresses nice. I suggested Body Kouros, because no one else would be wearing it and it smells phenomenal. She liked it but she didn't know if he would.

Do you mean class? I asked. Do you mean Is Body Kouros in the same class as Gaultier?
"Yeah," she said. "The same, like, level."

So I told her that YSL, who'd just died, is to Jean Paul Gaultier as Leadbelly is to Rap. She'd never heard of Yves Saint Laurent and she didn't really care. She didn't want something nobody else was wearing. For her and her boyfriend, and for a lot of people, cologne is a label, to be recognized and to impress. She didn't end up buying anything.

Leaving a perfume shop without making a purchase is so unthinkable to me that I literally can't imagine it. So you're low on funds. Don't you want a sample? Aren't you curious about wild cards? What if the best perfume you've never smelled is sitting on one of those shelves somewhere? What if something up there smells a lot like the stuff you wear now, only better? Every time I'm standing there and someone walks in smelling of nothing, it hits me again, how few people actually wear cologne, and how few of those wear anything any good or which at least expresses something unique about them. When my co-worker started wearing CK1 I was so enthusiastic. It was so nice to have someone else's cologne to play off of. When I got Lolita Lempicka au Masculin I gave it to her. It reminded me of Lempicka for women, which I already had. By giving it to her, I could still smell it. She's the kind who goes through one bottle at a time--and only applies once a day, so it wouldn't be going anywhere soon.

I have a fantasy, and it goes like this: I walk into a perfume shop, and all the usual suspects are there, sniffing all the same old same olds. Then somebody off in the corner (I like to think a guy) lights up like someone stuck his finger in a socket. His eyes are huge. He has a bottle in his hand. I gather he's just smelled it. He speaks directly to me because I'm the only one paying attention. If I wasn't paying attention, he'd be talking to the shelf.

"This stuff is amazing. Oh my God Oh my God oh my God. How have I never smelled this? Did this just come out? And in Eau de Parfum. And by Maurice Roucel. It's practically edible. There's only one bottle left. There's only this tester. Do you think they'll sell it to me? Do you think I can talk them into it? I'm prepared to sell my body. I'd wash dishes if they had any. I can't leave without this. I have to have it. I have to have it right now."
Posted by Brian at 7/03/2008 03:40:00 PM

This was really funny.