This Week at the Perfume Counter: In which your roving I Smell Therefore I Am reporter makes the marketplace rounds, nostrils flared

I keep going back to the Estee Lauder counter. Do I want Sensuous? I can't decide. I do and I don't and I might and maybe, don't pressure me. Everyone says it smells great for an Estee Lauder fragrance, but I tend to scratch my head at that, and not because it itches. I continue to be surprised at the House of Lauder: this week, by Beautiful. What an incredible, gooey, tobacco rose. Try to convince me otherwise. The more I smell Bernard Chant's work, the more astonished I am. Azuree, Aliage--even Estee, which many consider some kind of mistake. Is it because I grew up smelling the Lauder line that I love the fragrances so much? My mother had a half-empty/half-full bottle of Youth Dew on her dresser. It still might be there. I loved the gold bow affixed to the elastic band. I loved the smell, which seemed so dated it had pushed back into the future going in the opposite direction. I can't remember who had Estee on her dresser; possibly my paternal grandmother. I stood before her bureau smelling from the open bottle, which she displayed on a gilt, mirrored tray. It smelled fantastic then and smells even better now, with an emotional pull to it from accumulated memories. A brighter, more startling cousin to Chanel 5 and Arpege. Its silver cap seemed perfectly apt to me at the time. There was something chilly about it, like iced flowers.


Friday at the mall, the Lauder counter was unattended. A pretty blond came over to help but didn't know whether they stocked Tuberose Gardenia. She did price Sensuous for me, and told me, as they all do, how fantastic it smells, as if, being a guy, I can't smell a difference between, say, Joy and Ajax. Yes, yes, I said, fantastic, fantastic. After pricing Sensuous for me, she left, explaining that whoever usually worked Lauder was, like, in the bathroom maybe and would be back later, presumably in case I needed someone to tell me how good something else smelled. I left and went across the hall to Perfumania, which sometimes requires a great deal of patience. The staff there works on commission and, I'm told by someone who migrated to Macy's, are encouraged to sell, sell, sell. It isn't enough that you buy a bottle of Posion. You must also buy Ralph Lauren Pure Turquoise, and lotion, and here, what about this, and this other thing, and--hello, where'd you go? Someone at corporate believes there's no hope of a return customer at Perfumania--the client walks in, crazed, buys on impulse, then leaves, forever--so why bother with subtlety?


I'd just smelled Cinnabar and wanted to compare it to Opium. I also wanted to know the difference between the three Opium flankers Perfumania stocks, but I've been down that dead end road before. They have no idea. Better luck on the website, which has no pictures for these and offers no clearer an idea. My favorite saleswoman was there (I call her Gladys). She knows I have a problem and need zero encouragement. I'll be back no matter what happens, again and again and again, often several days in a row. If the whole city evaporated in a strange toxic cloud overnight I would still drive over, out of habit, exiting my car, walking directly to the location of Perfumania, without noticing its conspicuous absence, until I stood on its once-hallowed ground or whatever and looked up and was like, oops, oh yeah, that apocalypse thing. Gladys has her tester strips ready in one hand as I approach, a pen in the other. Hello, Brian, she says. What are you buying today? When I leave, Gladys doesn't say good-bye or come see us again. She says, see you tomorrow. 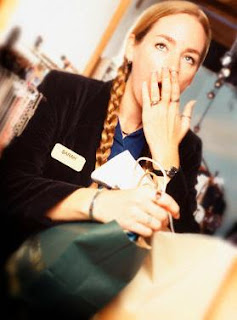 I couldn't tell the difference between Opium and Cinnabar and figured I'd allowed sufficient time for a bathroom break, so I returned to the Lauder counter. It was still unattended, and the blond was gone now, too, but a rather dour young lady approached me, or rather, waited for me to approach her. Did I imagine a tone of impatience in her voice? I wanted to price Private Collection. My sister used to wear it and it smells so-


Yeah yeah, hold on a second, her demeanor said. She was back there reaching around in the display case like a blind woman, and I thought, dare I guide her? She didn't seem like the type who wanted the raft at her drowning moment, unless she could be made to feel she'd found it and inflated it herself. It's right there, I started to say. Yeah, I know, she snapped. I'm just trying to blah blah blah, as if I'd interrupted a delicate procedure and now she'd have to start all over. Hmm, she practically yawned, once she'd extracted the Private Collection. "We have one pocket size and one larger but the larger is a spray and the pocket is a roll-on so your best bet is to go with the larger." I could plainly see, reading the boxes, that both were spray bottles, but didn't point this out. And how much is the Estee, I asked, once she'd priced the PC. Very cheap, it turned out, as the Lauders usually are. I took one of each. Ringing me up, she entered 3333 instead of 33, and was suddenly humble, as if I might run to the bathroom and report her mistake to the Lauder rep.


Other purchases this week included: Michael for men, Romeo Gigli Sud Est, Magie Noire (the old one), and ENjoy. I should point out that of all the perfume counters I've been to in the last few weeks, with the exception of Memphis Fragrance (which is always friendly), Walgreens was the most helpful. Imagine that.
Posted by Brian at 7/06/2008 12:44:00 PM

Bwahahaha!!
Nice article, Brian. You just described most of my department-store perfume sorties.

"whoever usually worked Lauder was, like, in the bathroom maybe and would be back later, presumably in case I needed someone to tell me how good something else smelled." LOL!
And, indeed. I always want to tell the SA, 'I'll make my own mind up if it smells good or not, Missy!' But I'm too polite and, you know, British... In fact I'm a pushover, which is why I own several scent-of-the-months which don't suit me at all.
Online is safer - except you can't try the perfume out, of course. And wandering around sniffing things is half the fun.

well now I'm insanely curious, Tania. What are your scents-of-the-month? My problem is I'm impatient and live in Memphis and sometimes am in the mood to buy something YESTERDAY, so I buy things I might not if I had access to, say, Parfumerie Generale. I don't really buy things I don't want, per se, but I do buy things which are pretty far down on my list of interests, like, um, Jaguar for Men and such. Lauder seems particularly contemptuous to me. They don't take too well to me. It must be my attitude, or maybe they think I'm putting them on. I have noticed though that since the Turin book came out all the old Lauder scents are right back out on the counter. Even a month ago they were stored in some neglected drawer and when I asked for them it was like I'd requested absinthe.