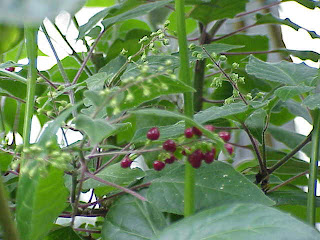 Patchouli is, without a doubt, a strong smell and it doesn’t wash off easily. It surely is one tenacious little note. I often see posters on the fragrance boards saying that they liked xyz fragrance until they noticed a hint of patchouli, then it was ruined. I can’t say that I’ve ever hated the smell of patchouli. In a way, I like it. To me, it’s rather clean smelling in its oddly musky earthy way.

I’ve been to several ‘Dead Shows,’ not because I love the Greatful Dead but because I’m utterly amused by the scene. The overpowering smell of patchouli is always a given, as are people begging for a ‘miracle’ (a ticket) and selling vegetarian fare (Dead Heads needed to eat since they camped out in parking lots for days on end). Sometimes I think the smell of patchouli mixing with an unclean person’s skanky body odor is what many people consider the actual smell of patchouli. If you subtract the skanky body odor, which is what the patchouli was meant to cover, you actually find an interesting fragrance. I’ve been one of the (perhaps few) who always try a scent when it’s blended with patchouli. L’Artisan Voleur de Roses is one example of this. I couldn’t wait to try it, and I loved it. I love the scent, but like most L’Artisan fragrances, it disappears within 20 minutes, even the patchouli note couldn’t make a L’Artisan last a full hour.

This brings me to a patchouli fragrance that I just love and wear often. It’s Keiko Mecheri Patchoulissime. So far, no one has commented or made a face that I stink like patchouli when I wear Keiko Mecheri’s patchouli. I’m so happy to have finally found a perfumer that treats patchouli as the centerfold of a fragrance and does it in a beautiful delicate wearable way. Perhaps if enough time passes, so that most don’t remember the association between patchouli and unclean hippies, everyone can stop hating patchouli so much. I think it’s a misunderstood and sadly unused note in most perfumes. It adds a gorgeous depth and lasting power, especially to musky perfumes but also to florals. Congratulations to Keiko Mecheri for being brave enough to take on the “dreaded note.”

I am right out of the hippy movement, now that certainly ages me... I HATE the scent of patchouli, and never even got a whiff of it until the grateful dead in NY although I lived with and traveled with hippies for years in the 60's and 70's through Ca.,Washington,Oregon along the coast through Florida up the eastern seaboard and into NY

This is truly funny to read right now when the perfume industry is literaly OVERFLOWING with patchouli fragrances! Alas, it may not be all the same as the patch in the powerhouse 80ies chypres, but we certainly have lots of it around today! And I for one never had issues with it THEN - but I never wore the dreaded patchouli oils, but just scents like Armani Armani *the original "black" one and Fendi Fendi and Guy Laroche's Clandestine, but they certainly had patchouli in them. But they were such wonderfully blended and intoxicating fragrances that one never really even thought of ANY specific notes- one just enjoyed their glory! Now with everything smelling like Mademoiselle and Jimmie Choo and Ricci Ricci and Yves Elle/ I for one have started to get issues with it! Funny, how things go!