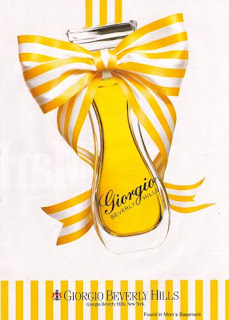 What can you say about this perfume, application of which was practically mandated by law at one time? You see the packaging and a boat of memories comes floating back. In one of these memories, it's high school, between classes, and you're approaching the cool girls in the hallway, wishing you could evaporate, because you really don't feel like dealing with their shit, they're such a clique, really they just want to spread shit about people, which you could never really understand, because if you're so fantastic, if you're so great, why do you need to waste so much time talking trash? What are you trying to prove? That you're not the one who's ugly? That you're not as average, as generally unexceptional, as you worry you might be? As you get closer to their crowd, they contract in toward some unseen nucleus of exclusion, their backs to you, and your stomach sinks, then tightens, then you're like, Oh get over it, grow up, this is only High School, and you remember what your mother always says, "They're just jealous, that's all, green with envy." Then you remember how ridiculously out of touch your mother sounds when she says that, so ridiculously out of touch that you can't possibly be reassured by it. So they're jealous. So what. You still have to deal with them everyday. And of course as you pass there are tremors of laughter, that heartless cackle indigenous to the shallow. They're probably commenting on your hair, or your shirt, the way you're holding your books: they take pains to make sure you can't tell exactly what they're ostracizing you for, so you can't actually change something to win their acceptance, and instead will feel an overall nagging sense of inferiority. You look ahead to get through it, beyond them to a time when these girls will be bitter and disappointed, waiting at home for The Guy, who is out making money but will come home smelling like stale office coffee and upholstery that sees a high quotient of fat asses per day. You can see how their bitterness will have shaped them; their figures, their faces, their outlooks. How boring they'll be. And where will they go, what will they do, with no one, with nothing to contract into? Like you, they wear Giorgio, but the similarities end there. For them it's badge, for you it's armor. It keeps their laughter at bay, drowning it out with the white noise of near-stink. You can't put it on or smell it without seeing those yellow and white stripes, a sunny prison consigning you to life among your "peers". Even the bottle is brutal, shaped like a club, like something you'd hit someone over the head with. It hides who you really are, protecting that, so you can preserve it for a time safe enough to bring it out, if a time like that ever comes. It doesn't matter what Giorgio smells like, or whether you actually like it. It's part of your school uniform. What matters is, they can't get through it to you.
Posted by Brian at 6/30/2008 02:45:00 PM

Just ran into this blog. Big fan. Beautifully written posts.
And yes - Giorgio has found a new place in my rotation. I have a BF who loves the stuff on me. Go figure. - Sakecat

Hey Wendy. It amazes me how many smart, fascinating people there are on the web, and so many of them are writing. It boggles the mind when you realize how intricate everyone's lives are, and how all these lives make up a world, so much is going on, and yet all you hear most of the time is the white noise. Thanks for singling yourself out. I'm going to borrow you strategy at the amusement park (read it on your blog). I'm assuming we're roundabout the same age or generation, and I wondered, reading your entry about Kings Dominion, how you even rode more than one of those rides, let alone four. About Giorgio: A few days after writing this post, I picked it up again at a local discount perfume store. It's wild how those old days come rushing back into your head at just one whiff. And I thought, you know, this stuff smells pretty good. It's the memories that stink. Thanks for getting in touch.