Dandy of the Day 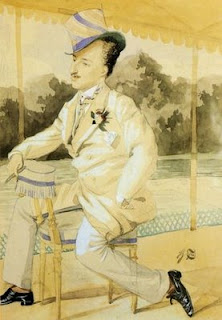 At the ribald age of three he was, already, inordinately preoccupied with twill and velvet and satin and brocade. By Six, he was reciting poetry--first Dr. Seuss, then Yeats. He wrote to Dear Abby at sixteen: "Why does the world at large seem not to care about the color red?"

Dear Abby did not respond.

He believes great, even obsessive care should be taken in one's dress and the dressing of one's friends. Enemies can fend for themselves, but he gives them enough rope. His appearance outside people's bedrooms at the break of dawn is not altogether unheard of. From the window, he makes discreet, attentive suggestions. Do not please inflict yourself upon the nylon green blouse, his eyes sigh. Even nylon deserves a better hue.

He wears Guerlain--specifically, L'Heure Bleue. It reminds him of a dense, textured sky. Over which: a field. Wind eddies through the grass, creating elaborate patterns. Birds fly overhead with the common sense to recognize that they are purely decorative. The rodents stay clear of the picture, out of common decency. There is a torte in the field which has not yet been discovered by the ants. He decides to eat the torte, the freshly-baked scent of which wafts in filigreed vapors up to his nostrils and straight back to his childhood, where a bed bedecked in twill and velvet and satin and brocade awaits his arrival.
Posted by Brian at 6/24/2008 11:03:00 PM