Can we all stop talking about perfumes as if they become extinct after a shelf date and should be retired to some olfactory graveyard, where they might be admired but never worn? Fine, you mother wore Lanvin Arpege. My mother drank milk, rode a bicycle, used Crest toothpaste, and shaved. It doesn’t keep me from doing all of those things. Okay, so that was my father. Okay it was my neighbor’s father. The point is, everything reminds you of something. Seeing that running faucet reminds me I have to go to the bathroom. Perhaps I shouldn’t, as someone else once did. 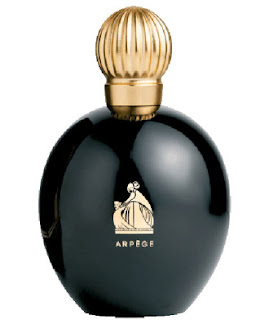 All over the perfume blogs you hear two frequent cautionary prefaces, like warning labels on hazardous chemicals: “This is technically for women but I think it might be good on a man,” and “It smells like my grandmother.” The first one we’ll save for some other time. As for your grandmother, Arpege is a useful reference point.

Arpege was created in 1927 under Jeanne Lanvin for her daughter’s 30th birthday, or so the story goes. Her daughter was a musician; thus the name. Andre Fraysse, then 27, was commissioned to create the fragrance, and was assisted by Paul Vacher. Fraysse went on to do Rumeur, My Sin, and Scandal, also classics. His son, Richard, is an in-house perfumer at Caron, under whose supervision the classics there have not been treated so kindly. Like most perfumes of a certain age, Arpege’s formula has periodically been nipped and tucked, most recently by another Fraysse, Hubert. The fragrance is, as always, strong on aldehydes, one thing which is said to date it (though Chanel No. 5 has more aldehydes, and continues to sell very well, thank you) and it dries down into leather and tobacco accords, also said to be dated, go figure. The fact is, perfumes don’t really go out of style; people are just desperate to seem current, and will follow whatever trend is sold to them in order not to seem “old-fashioned”, a marketing term which conditions them to continue consuming. Ultimately the only relevant barometer should be whatever you think smells good. A flower smells nice. Is that outdated? Think of Arpege as a bundle of flowers left out in the sun, on a leather car seat.

A magical property unique to perfume is its ability to change mercurially according to various environmental factors. Most of us smell rose in compositions which are said to contain it, just as when we say table we all generally know what we’re referring to. If you start describing the table in detail, you enter a more associative realm, and open the issue up to personal interpretation. It was a low wood table with inlaid tile and wrought iron legs. Was it a coffee table? Oh I suppose. But it was taller than that. Taller than what? A coffee table. How tall is a coffee table? I should say a coffee table comes up to your knees when you sit down. Doesn’t that depend on how tall you are? Well, yes , it does, but—oh shut up.

Smell is the same way. Maybe you’ve never liked Lolita Lempicka, then you smell it on someone you’ve just met, only you don’t know it, you only know this person smells fantastic. You don’t believe him when he tells you what he has on. Chanel No. 5 might be awfully formal, slightly powdery, on the woman in a suit dress. Someone in jeans might make it seem cozy and sulfurous. A man might mak 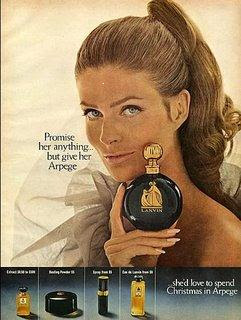 e it seem like some alien life form in the shape of a guy you thought you knew. Arpege is no exception to this phenomenon. No perfume is. While it’s true that various aromachemicals and approaches fall out of use, this matters very little to people who have always worn what they choose, rather than whatever is sold to them. Scent is both specific and malleable: the smell of your house at someone else’s place might remind you of home, but the similarity forces you to see things differently. The smell of apple pie might bring tears to your eyes, while someone else will heave. The same smell is a world apart from person to person.

As a famous sitcom actress was once said to have spit at singer-songwriter Rufus Wainright after he gushed that she’d always reminded him of his mee-maw: “I ain’t your f—king grandmother, kid.” And then there's Arpege: modern and feisty, it’s been around for a while. Nuff said? Fraysse’s intention was to create a truly eternal floral, and as much as one can, he has. The opening of bergamot, neroli, and peach is vivid, thanks to the aldehydes. The floral heart is traditionally composed: Jasmine, Rose, Lily of the Valley, Ylang-Ylang. These extend into the dry down, a smooth medley of vanilla, vetiver, tuberose, and vetiver. Arpege is considered to be the first feminine to use such a large quantity of sandalwood. The aldehydes too persist well into the dry down, itself a thing of wonder. The fragrance lasts several hours with impressive intensity, then softens, lingering with woody phosphorescence. The insignia on the bottle depicts Lanvin and daughter Marie-Blanche. Both of them have passed. Arpege is still around. A perfume like this doesn't date. It's too timeless.

A lots of beautiful bottle in here.
All the bottle is really lovely.