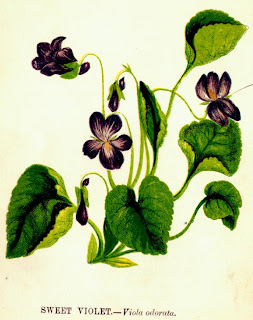 Last night, I started thinking about the mini bottle of perfume my grandmother once kept in her medicine cabinet, squirreled away between expired aspirin and a dented tube of Neosporin ointment. A slightly resinous, dewy violet soliflor, it projected much farther than the size of its container would lead you to expect. I have no idea what it was called. It wasn’t labeled. Something very cheap, probably.

Who knows why my grandmother hung onto it all those years. She certainly didn’t wear it—in public. Summers and winters I visited, and each trip I snuck repeatedly into her bathroom, and each year I could recall the scent more specifically in my mind, and I anticipated meeting it again and that shock of recognition and the sense it gave me that all was well.

I probably don’t need to tell you that I could have spent all day in there with the door locked, that I got lost, sitting on my grandmother’s antique, velvet covered parlor chair, my elbows anchored onto her marble counter top, my mind elsewhere. I doubt I need to explain the intoxicant that perfume was for me. I’m guessing that if you’ve bothered to read this far you’re on the same kind of inexplicably obsessive quest and, like me, can beam to another dimension of pleasure and bittersweet emotional territory simply by placing a bottle of perfume under your nose.


When my grandmother was sick and it was clear she wouldn’t be around much longer I stole the bottle and brought it home with me. I was too ashamed to ask for it, and knew it would be lost forever once she died. I never regretted this filial larceny, as it seemed more like a rescue mission to me. Who else could be counted on to preserve and understand its peculiar mystery? Deceptively banal, it looked like something you would toss out with the rest of someone’s belongings, meaningless detritus from the past.

I placed the bottle in my own medicine cabinet, which seemed to me its natural environment, and the curious thing I noticed from the moment it became mine was that I hadn’t actually been smelling violet all along. It isn’t until someone points it out to you that you detect, say, the leather in Piguet’s Bandit. Before that, it hasn’t existed. Afterwards, you smell Cellier’s masterpiece again and miraculously, to your astonishment, it appears, and stays there—prominently, even—forever after, like the exhaust from a sofa stuffed with cut grass. What I’d been smelling in my grandmother’s mini bottle was my childhood, memories of her and summers there and freedom from worrying intensely about things the way adults do. An incredible sense of love and well-being permeated my consciousness when I inhaled it.

A complex, emotional mother lode of associations had accumulated within the scent over time, for which violet was simply the carrier, a double agent harboring top secret, volatile information. I only recently became aware of top notes and base notes, of linear as opposed to complex compositions. There weren’t perfumers behind Joy and Chanel. They simply existed, like the sky and the sunset, oxygen and birds, situational magic from the universe. I wasn’t a collector or a connoisseur. Perfume wasn’t science.

I didn’t pick scents apart, way back when, or even known it was possible. I didn’t know there were sites to break things down for you. Rose, iris, sandalwood, patchouli, aromachemicals, soliflors and abstracts. Smells were no less mercurial before these terms entered my frame of reference, but they operated in a much more emotional, less strictly analytical way. My experience of fragrance had previously been more primal, and though various perfumes still have the capacity to hijack my consciousness, expanding viscerally in my mind, the intensity doesn’t last as long as it once did, and I suspect that’s because of my arguably psychotic efforts to figure out the name or manufacturer of the juice in my grandmother’s mini bottle.

At one point, several years ago, when my partner was cleaning the bathroom, I heard something shatter, and rushed in to see what was going on. I saw the bottle in shards scattered about the sink, and my response was so violent, so impulsive, so irrational and beyond my control that it sort of terrified me. It meant that my grandmother was now truly gone, and someone close to me had been responsible for her death—or I was. Inconsolable then, I still feel sick when I think about it now. My grandmother kept that scent alive until she couldn’t anymore. I’d taken responsibility for that delicate network of memories and through unconscionable carelessness failed her miserably. My partner collected the larger remains of the bottle, wrapping them in plastic. Some of the liquid remained but has since vanished. I can’t look at it. I get too upset.

Since then, I’ve become like Poe’s unnamed narrator, searching for his beloved Ligeia in other people’s faces. When I approach a perfume counter, I want nothing more than to find my grandmother’s memory. I want that scent back. It’s a time machine. I search for it in all things remotely similar. Trumper’s Ajaccio Violet comes close, foregoing the syrup sweetness which distinguishes most of these soliflors from the vibratory warmth I remember. Close but not quite. It’s impossible for me to think of perfume now without feeling it has nearly religious, sacred properties, and violet has been the holy grail.

Last week, I made an important discovery online. A fragrance I’ve seen at least thirty times in a local discount perfume shop and overlooked as irrelevant smells distinctively, even exclusively, of violet. It was released in 1947, right before my grandmother's home was built, at a time when my grandfather was still trying to make up for his philandering with gifts. The first perfume from the house of Balenciaga, Le Dix is officially described as a floral chypre. Its bottle is a solid , faceted affair, its liquid the color of champagne. It was created by Francis Fabron, the nose behind the original L'Interdit and l'Air du Temps. The pyramid lists neither violet nor aldehydes, and yet these are the perfume's combined impression.

Like other aldehyde constructions, the sum total makes the florals pop, simmering against a cool background of white. In this case, a hot and cold accord materializes, unmistakably violet. Learning this, I rushed over to the store in question, pointing impatiently at the box on the shelf so the Chinese owner, who barely speaks English, would understand. Is old, she said, smiling. You like the old perfume.

I ripped off the cellophane and opened the corrugated glass bottle out in the car, spraying my arm. The air vent carried the fumes up my nostrils, and I jettisoned away, soaring back through time to the high grass outside my grandmother’s window, the feel of her chair’s velvet on my bare thighs and the fabric’s vibrant green hue, the melancholy effect of the striped yellow wallpaper in there and her luxurious gold tub. I heard adult voices outside the door, and saw my little kid face in the mirror, suntanned and frightened, staring back at me.

Then I was in the field by my grandmother’s house riding the lawnmower for the first time, and there they all were in the distance, waving me back, I’d gone too far, but I wanted to show off, so I made another turn, too widely, and before I could stop the thing I’d grazed the enormous vacation trailer my grandmother had taken to Arizona and Florida and Nevada, and I was so ashamed by my bravado, so humiliated that I slammed into park and bolted off into the weeds, and kept running and running, crying so violently I couldn’t see where I was going, until for whatever reason I stopped, panting, just in time to hear my grandmother’s voice calling out to me with the sound of total forgiveness.
Posted by Abigail at 6/14/2008 12:26:00 AM

I read your story and it moved me to tears . I understand totally.

I can't wear Le Dix because it makes it impossible for me to navigate the day. My mind goes back several decades but my body obviously stays firmly in the present, so it can be distracting, and it plays tricks with my mind in other ways. It keeps creating the sudden impression that I'm in the room with or have just passed somebody I know. I then realize it's only an impression of my grandmother, conjured by Le Dix, and I feel like the object of a practical joke. I save Le Dix for occasions when time travel of that sort is more practical and can be enjoyed without intervention.

Even though this was posted so long ago, I just wanted to express how touched I am by it..how my heart aches at your words. It is astonishing to me that you can conjure up memories with scent and yours are truly beautiful. You made me bawl my head off and I was relieved that my daughters were in school so no curious little eyes could question me on why you moved me so. Thank you Brian,this post makes me wish you were my friend in real life.
In kindred spirit,
Tamara Jackson

Brian,
I just wanted to tell you how much this story moved me, and to thank you for writing so beautifully about your relationship with your grandmother through your love, loss, and recovery of her perfume. This was a wonderful reminder of the potency of scent and its relevance in our lives.
Warm regards,
Su

Thank you, Su. I'm glad it resonated with you. I was a little shocked to see I'd written this four years ago. It was, I think, my first post. It's not exactly bizarre to me that we've continued with this blog for four years, but it's interesting that I'm still writing from the same place, often about those pivotal early experiences, which continue to inform my world view. And how strange that this post is now tucked away, hidden and forgotten under 300-something consecutive posts, where someone like you can discover it the way I found my grandmother's perfume bottle, making it feel new again.