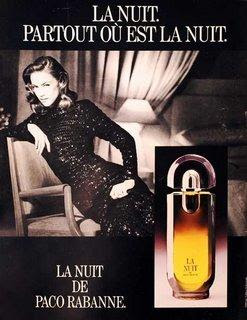 There's nothing like Paco Rabanne's LaNuit, but you'd never know it, judging from this ad. The fragrance was a success at the time of its release in 1985, which meant, if Luca Turin is to be believed, that a lot of women were walking around Nice smelling of barnyard.

The EDP is like liquid velvet (the EDT more like liquid satin), and decanting it from the bottle, a solid hunk of faceted glass, feels illicit. The model's posture telgraphs none of this frisson, looking instead as if she wandered out of a Carolina Herrera ad.

More bafflingly, what appears to be a promotional spot for the launch of the perfume, starring Isabella Adjani, manages to be both ridiculous and mind-numbingly dull, with a peppy synth soundtrack and much aimless roaming around Paris. See it on BonVoyage, Isabella Adjani, to participate in the sheer insipidity of it all.

Why waste the celluloid? Surely Robert Altman would have loaned them footage of Shelley Duvall as Olive Oyl from Popeye. Had he refused and they asked me, I might have suggested the following replacement teams for such an ad campaign:

I see we have the same sensibilities coming to films ;-)
That's good to know!

I agree that the Adjani clip has something amiss, one of which is the horrid soundtrack.

But there was another clip of La Nuit which featured the blonde in the print ad. I can't seem to find it, though.

I would love to see it. Given the way La Nuit smells, you would expect something a lot racier.