Last night, I dreamed I had a flight to catch—back to America, I think, from England or France or Peoria, Illinois. I was late to the airport, and it looked like I’d gone to the wrong gate, then, when I got to the right gate, the plane was pulling out, and though I managed to get on, I realized, once I’d reached my seat, that I didn’t have my ticket. The sky outside the windows was fearsome. Lightning kept perforating the black, rolling clouds, zigzagging in front of, then behind them. You could see a blinking siren whirring in circles way off in the distance. The pavement was slick with rain and various airport personnel were racing every which way across it: by foot, in little motorized carts, dragging luggage, plastic traffic cones, and last-minute warnings. Take-off was misery. The plane shook. Babies were crying. The drink cart emerged, then seemed to think better of it and retreated. The stewardesses scurried up and down the aisle trying not to make eye contact. A blonde with dark circles under her eyes glowered at me from over her romance novel, which was clearly just a barricade to hide behind. When finally the pilot came over the intercom, his voice was garbled, like the teachers and parents in Peanuts.


Nobody really knows where dreams come from. Most agree: to some extent, they represent the brain’s attempts to process information. But where does the information come from—and what does it mean, if anything? In ­­­­The Mind at Night: The New Science of How and Why We Dream, a book I’ve been reading, Andrea Rock explores various theories. The most compelling revolves around the notion that the various parts of your brain which get a real work-out during conscious hours go on standby when you sleep, regenerating, while others go into overdrive: you lose, for instance, your ability to establish logic-driven, causal relationships (B follows A, C follows B) and yet your imagination is more active than ever, churning out fantastic images.

Say you saw a striped cat sunning on the neighbor’s porch earlier in the day. Your dream removes the porch, makes your neighbor an astronaut, and puts the cat on roller-skates. In addition to all the data it draws from your daily life, your brain digs into its archives, rooting around for memories. This means, maybe, that your mother has baked you a cake for your seventh birthday, and walking down the street with it she trips over the cat, who is either totally inconsiderate or still adjusting to the sport. When you sleep, you experience a heightened emotional reaction to things. How sad: a cat on roller-skates has injured your mother. The cake is ruined. You cry. The cat cries. You and the cat notice each other crying, etc.

A lot of people don’t like this theory, preferring the idea that dreams work out crucial psychological phenomena from our waking lives and hold 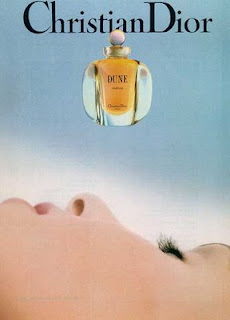 deep, transformative lessons, if only we can decode them. To these people, the cake represents childhood, the cat on roller-skates represents the passing of time, and the presence of the astronaut indicates a chronic inability to feel pain and happiness. I probably subscribe to the theory that dreams mean something, if only in a fairly random, obtuse way. But the events of the day have entered my dreams frequently enough that I believe what happens to you while you’re awake has the potential to happen to you while you’re asleep. So the fact I haven’t had a dream about perfume—not one, not ever—baffles me. My entire day is spent thinking about perfume to some extent and yet sleeping is a dry period.

Some perfumes try to replicate the sublimely associative phenomenon of dreaming (see Dreaming, Tommy Hilfiger, et al.). Images of shut-eyed women are rampant in fragrance advertising, depicting something between ecstasy and slumber. Yet the only perfume I've smelled which nails the unlikely imaginative space of dreaming is Dune, by Christian Dior. The contrast of aldehydes and benzoin is a startling one, odd and intriguing. The fragrance is dry but it feels as if the wind is blowing. Dust and sand swirl around, creating friction.

Dune is considered an oriental floral and yet it's like no oriental floral you've ever smelled. "The unusual fragrance carries a brisk briny scent, coupled with sea wind and the sandy warmth of beaches," the ad copy says. You're encouraged to picture yourself on the shore, hugging your knees as you look out over the water. But Dune is more like a desert, and the only water visible is a mirage. It's a slightly spooky fragrance somehow, something familiar and uncanny, like the visitation of someone from waking life in a dream. They appear in your bedroom and sit across from you on the edge of the bed, staring. They have something to tell you but you can't make out what it is. When you wake up, you carry the memory around with you all day, wandering around in a fog, as if it might have actually happened. It colors your entire afternoon.

The heart of Dune (jasmine, rose, ylang-ylang) is the only traditional thing about it. Above and below it, things are indefinitely shifting and settling. It has the persuasive power of dream and if the airport had a smell last night it would have smelled of Dune, the fragrance of missed flights and forgotten tickets from the unknown to nowhere.
Posted by Brian at 6/29/2008 12:58:00 AM